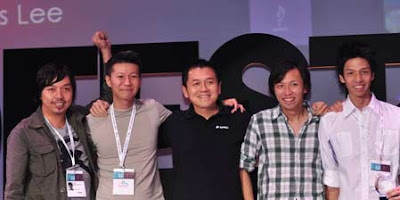 
Every time it goes out of the country to compete in advertising festivals, Malaysia always shouts this line as a battlecry - “Malaysia, Boleh!” (Malaysia Can!).

In Cannes of Asia last week, Malaysia showed indeed it can and towered like its world tallest twin towers Petronas. It won two Best of the Best awards and three previously dominating countries - Thailand, Singapore and Japan acknowledged its stature as the new creative hub of Asia. The rest just simply gave it a thundering ovation.

The imposing win by Malaysian agencies in Asia Pacific Advertising Festival held in Pattaya, Thailand from March 19 to 21, proved that its 2005 overall triumph in the same prestigious festival was no fluke.

BBDO/Proximity was king of all, bringing two Grand Prix Lotus trophies (Poster and Design) aside from harvesting 2 Gold and 1 Bronze Lotus trophies.

Phenomena was Production House of the Year and China Environment Protection Foundation was Advertiser of the Year,

Malaysia’s romp began even prior to the announcement of 2009 winners. “Tan Hong Ming”, a Leo Burnett Kuala Lumpur tv commercial and Adfest winner last year was recognized as the World Best Film by Gunn Report. Presented by Donald Gunn himself, author of the world’s official award list, the show also honored the most awarded agencies in the region for the year preceding.

If you don’t scratch the surface, “Tan Hong Ming” is a tv ad you would dismiss as crude, unappealing and ordinary. It is a powerful tale of love in its purest form regardless of color set in multi-cultural Malaysia.

The story begins with an unseen interviewer talking to Tan Hong Ming, a reed thin Chinese grade school tyke with bigger than usual bunny rabbit-like front-teeth - gaps in-between and all.

Hong Ming is asked if he has a girlfriend and what would he wish to tell her if he has. He answers in the affirmative, charmingly describes her and wants a romantic dinner date soon but he doesn’t want everyone to know because he thinks the world will laugh at him.

The girl walks in and is asked the same question. When the girl mentions his name as her boy friend, Hong Ming blushes and becomes deliriously speechles. He pulls the girl by the hand and walks away. Fade to black and these words appear on screen: “Children are color blind. Shouldn’t we keep it that way?”

“Tan Hong Ming” punctuates Malaysia’s reputation as Asia’s most consistent country in creativity. Used to import Filipino talents way back, Malaysia is now showing the way. When the Philippines won a gold in Adfest for Lotus Spa radio campaign, Malaysia even went further - it grabbed the Radio Grand Prix for a well-known big advertiser – Colgate.

Some say, the Philippines has written and produced more charming tv commercials than “Tan Hong Ming” in the past. It has captured three Adfest Gold Lotus trophies so far (McDonald’s “Lolo” tvc by Leo Burnett, WWF “Trees” and Lotus Spa, both by JWT Manila). Quite noticeably, the march is sporadic and far between.

Original writers and art directors abound in the Philippines. Technology and equipment are trickling in. It has what it takes and there’s no reason why the third largest English-speaking country in the world can’t make it. If Malaysia can, the Philippine can also say “Boleh!”

Dampened by the slowing economy, Adfest, which has overtaken “The Spikes” in importance dropped by 35% in entries this year. Delegate attendance also plummeted by a jaw-dropping 55%. Host country Thailand submitted the highest number of entries with 565, Japan came in next with 529, Singapore with 353 and India with 287.