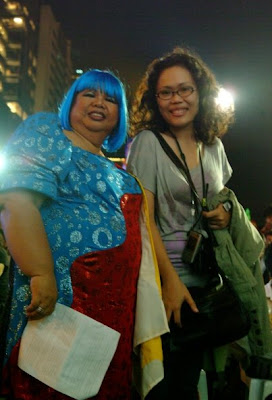 As far as the eyes can see, on a fertile plateau in southern Philippines, you see nothing but rows of pineapple vegetation. Crowning each plant when you take a closer look are fruits glistening under the sun, being beautifully sculpted and ripened by nature. A few missteps down the block, you could get lost in a maze of fruit-bearing shrubs.

More than twenty years ago, a tv commercial for a multinational brand was shot in this exact location. An ad agency handpicked a crack whipper to iron out logistical nightmares and other intricate demands of the shoot. Her name: Mae Paner.

Mae Paner, who? To watchers of You Tube on the net, she is Juana Change today, offshoot of Barack Obama’s famous election battlecry, created as female personification of Juan, tongue-in-cheekly coined to advocate change in how Filipinos do things, whether culturally, religiously or by force of habit.

Except for her hefty body, she’s been sculpted by advertising and theatre worlds, transformed through the years as a staunch advocate of anything that means change in general, in the Philippines.

In one satirical viral tv on You Tube, she’s a woman with two sides – a rosary-clasping government employee clandestinely accepting bribe money as a “Fixer.” She’s also in “Sta. Nina”, “Face-Off”, “Christmas Offering” and “Bayani,” taking potshots against proponents of Philippine Charter Change (“Cha-Cha”) among others. And she is set to do more of this genre in the coming months.

Asked if she is campaigning for opposition political parties and being used by them, Juana categorically says: “That’s the perception of some but really, Juana only stands for change and nothing but. She’s not for or against any political party, personality or figure.” That’s how she draws the line.

At close scrutiny, Juana Change wears a ubiquitous ‘love-for-country-heart-shaped ring’ and flaunts it wherever she goes. The girl who has started sinking into the national consciousness after You Tube made her wildly popular, now gets hundreds of hits a day and reads mails that support, encourage, even criticize her.

The former Production Manager for a couple of tv commercial production houses before rising to Assistant Director, and eventually TV Commercial Director is also a theatre and character actress, having appeared in several spots.

When people and colleagues in ad industry ask: “Is Juana Change for real?” Paner says, “there’s no turning back and she feels it in her guts. She thinks, “every one of us has something to contribute” to effect change and as far as she is concerned, it’s through her advocacies - even if it means shedding several pounds off her body weight.

While change cannot be done overnight, “there’s always a start,” says Juana. “Once that happens, things snowball and before you know it, people get use to it.” Like a fruit ripened by time and with many watchful ‘eyes’ behind her, people say it could be Juana’s crowning achievement if she can pull things off and crack the whip once more.

Sports enthusiasts will find Golf, Badminton, Bowling, Billiards and 5-K Fun Run added on the program, including an Amazing Race from Manila to Baguio. There will also be photography sessions and tours of Bencab Museum. For those who want to experience something different, here’s your kick: Flower Eating, Cloud Catching and Ghost Hunting – all lined for you.

Today, no one gives a hoot about a shelf of trophies made out of fake ads anymore – those bogus ads that never ran, ads that forced media to run them just to qualify, or worse, ads that clients did not approve of. Like zombies, scam ads turn unsuspecting festivals into some kind of freak shows.

It was supposed to be one of the fastest growing advertising festivals in that part of the world, with a record 2,079 entries competing last month, presented by Cannes Lions International Festival, together with regional partners Motivate Publishing and Gulf News. Until a series of scam winners were unearthed and rocked it to the very core.

After an investigation, organizers of Dubai Lynx Ad Awards, the Middle East and North African advertising Oscars, found 18 entries submitted by ad agency FP7 Doha questionable and withdrew 7 awards associated with the agency. This included the Agency of the Year Award, 1 Gold for print, 1 Gold for TV/Cinema, 3 Silver for Print, 1 Silver for Outdoor and 1 Bronze for TV. In addition, 10 shortlisted pieces in print and outdoor categories were disqualified.

UK trade website Brand Republic which flagged the earlier story quoted client Sunny Hwang, president of Samsung Electronics Levant: “At no time was Samsung Electronics aware of these ads and the company has not approved nor commissioned FP7 Doha to create an advertising for Samsung SL310W Cameras.”

The ad showing Jesus Christ taking a photo of a group of nuns has caused outrage in Lebanon and the agency forced to apologize to the Lebanese people. The work was seen as “an attack against Christian symbols” and caused considerable damage to Samsung’s image in Lebanon.

Inspite of the global economic downturn, the country is enjoying an unprecedented tourism boom. Flights to Palawan alone, during the Holy Week break were fully booked with three major airlines PAL, Air Philippines and Cebu Pacific, including two others - Seair and Asian Spirit enjoying brisk sales. Boracay and Cebu as usual were favorite destinations with the Bicol region, especially Camarines Sur, competing for a huge chunk of the tourism pie. Be your own Conde Nast. There’s so much more to enjoy in the Philippines than going abroad.
Posted by Roger Pe at 6:01 AM