PHILIPPINES TO GIVE BIRTH TO ASIA'S NEWEST JEWEL 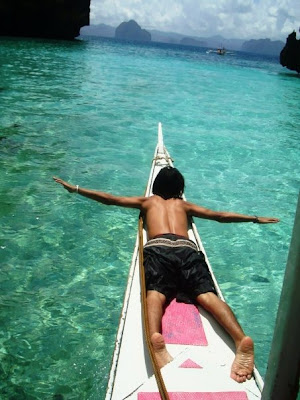 What global recession? Most recently chosen as the Most Preferred Destination in Asia by Shanghai’s World Trade Fair, the Philippines is experiencing an unprecedented tourism boom. Last week, it was also the best performer among Asean nations on the stock market index, surprising everyone.

When Asia’s newest and brightest tourist marina opens in 2012, 5-star deluxe Diwaran Marina Resort will be one of the Philippines’ biggest advertising surprises to the world, auguring well when the Tourism Bill is signed any time this month.

Imagine: Dugongs, dolphins, whales, giant clams, pearl bearing shells, a riot of fish cavorting with you just a few steps from the shore, hundreds of limestone islands - each charmingly smiling at you, revealing the whitest sandy beach you ever saw. Only the presence of a real mermaid is lacking to make this experience incredibly perfect.

When God scattered thousands of rocks, big and small, in this northern Palawan town, you’d probably think He’s an Art Director. Strewn around are island gems you’d want to put in your jewel memory box, each within striking distance with the other, geographically designed perhaps to make it as the province’s crowning glory.

Where on earth would you find a hair-raisingly unmoving bluish-green water lake you can almost walk through it?
From an airbus flying more than 30,000 feet above the ground, Calamianes not only ignites the imagination but dazzles like no other. In one of these islands is enchanting Cayangan Lake, a Hall of Famer in the country’s annual cleanest lake search.

Among these islands, too, is Coron, where Diwaran is located- site of the next big thing for Asia. In two years time, a US240 million dollar tourism development project (around 11.5 billion pesos) would have been completed – intended to overshadow Phuket as Asia’s tourist hideaway playground.

According to Ho Kwon Ping, Singaporean executive chair of Banyan Tree Holdings, big developer of resorts, hotels, spas and residential homes in Asia Pacific, this 55-hectare uninhabited island on Coron Reefs, famous for its diverse marine life, sunken Japanese warships during World War 2 and eco-parks, will be transformed into the “single largest integrated island resort in all Asia.”

On mid-western side of the mainland is one for the books. The newly discovered San Vicente Beach – stunning with its perpendicularly straight, kilometric long white sandy coastline is another world wonder if developed to its full grandeur.

At its full occupancy, all three hotels with villas, marina and recreation facilities including a modern town center in Diwaran can accommodate more than 1,500 tourists on a single island, providing jobs to at least 12,000 people in one of the most mystical island groups in Palawan.

Banyan Tree Holdings has hotels in some of the world’s most exclusive and popular holiday spots like Seychelles and Maldives.
Posted by Roger Pe at 9:14 PM