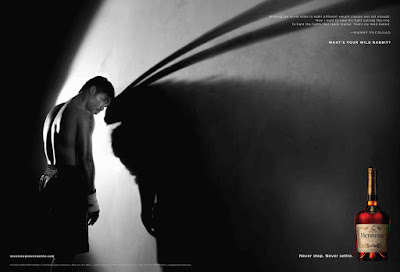 Erykah Badu is known for her cerebral music style. Oftentimes, she is called the "Queen of Neo-Soul" music.

Manny Pacquiao is, who doesn’t know him?

All three global icons star in Hennessy’s “What’s Your Wild Rabbit?” ad campaign, the brand’s return to tv advertising after a 5-year hiatus.

Launched last month, it is the largest marketing investment by the world’s number one cognac brand in its 247-year history.

According to folklore, rabbits run wild in the French Cognac region. Though the animals are rarely seen, stories have been told that they drive people to chase for success.

Chasing a wild rabbit is about pursuing your dreams, never tiring no matter what the difficulties are, never giving up even when the doors have been seemingly shut and life has almost knocked you down completely.

Many stories had been told about Manny Pacquiao’s humble beginnings, a harsh life of debilitating poverty after his father left his mother for another woman.

Life as a construction worker, janitor, cigarette vendor, bakery helper, bread peddler, he did many other menial odd jobs to keep body and soul together.

He ended up in the boxing ring, brutally maiming his opponents at every mandatory countdown. A devastating knock out during his early boxing career almost exterminated the Manny Pacquiao we see today.

But life has a way of rewarding back those who keep on walking, err, running.

Directed by Johnny Green, the Manny Pacquiao part is about his wild rabbit chase, condensed into a gut wrenching 90-second spot, of grit, determination and something to mull over long after the last boxing bell had fell into deafening silence.

It is not by luck, nor by any chance that the new Pacquiao commercial came out as an inspiring advertising.

No less than David Droga, founding chairman of Droga5, last year’s Cannes Lion Outdoor Grand Prix winner and past competition head of jury handled it. Together with his equally stellar Executive Creative Director Ted Royer, he made sure it would be.

Both Droga and Royer were frequent Manila visitors during the mid-90s as part of their regional roles, overseeing Asian Saatchi and Saatchi agencies’ creative output.

The ad begins with a dramatic close up shot of young Pacquiao (great casting) in an outdoor setting.

Cutting interspersely between a wild marsh and lahar desert, the opening scene establishes him as a metaphoric hunter, running after the proverbial wild rabbit.

A rabbit in a tropical country like ours? Don’t blink you might catch it, but it doesn’t matter if it’s real or not, the chase is symbolic enough.

The juxtaposition of scenes into Pacquiao’s frenetic training is beautifully executed. The camera chases him, too, as he pounds a desolate road on daybreak.

Chronicling his difficult life in GenSan seems accurate, the local color is authentic, and the writers, indeed must have done good research.

The trophies sitting on a wooden shelf under a roof of a shoebox house evoke so much pathos.

The foreboding flock of sparrows roosting for the night, darkening the skies is a cinematic gem.

The wanabe-Pacquiaos queueing in a local boxing gym, inspired by Pacquiao’s life story are beyond words.

The cut-to-cut of pinoys from all walks of life, cheering from an over populated alley, a jampacked cockpit, a billiard hall … to millions of homes across the nation tells you something: we’re a one big united country without a doubt.

Pacman, the raging bull trains like mad. The knock out machine is power-packed solid at the punching bag, punch-for-punch, blow-by-blow, hard hitting to the core.

Soon, he is ready to rumble. We are transported to Las Vegas’ Madison Square Garden as the world watches. We get a glimpse of Pacman as a human being, fervently praying by a small corner.

Pacquiao wins his 10th world title in 8 different weight classes. As he raises both hands, the ad cuts back to his long and lonely journey in slowmo, making the moment an emotional powder keg. Certainly, director Green knows how to squeeze more tears from the audience.

“Fighting the fights that really matter. That’s my wild rabbit,” Pacquiao says, as he peers from a window of his palatial home.

You’d want to see the ad over and over again, whether you’d been battered by life or born with a silver spoon in your mouth, or simply love a great inspiring ad.

David Droga is listed as one of advertising’s “Ad Geniuses” who began winning Cannes Lions at age 22.

He led Saatchi & Saatchi’s Asia operation, based in Singapore and made the agency the best in the world in 1999.

He was ECD of Saatchi London when the agency was named "Global Agency of the Year" in Cannes in 2002. Promoted as Worldwide Chief Creative Officer of the whole Publicis group, he has won more than 50 Cannes Lions, over 20 One Show and 7 D&AD Pencils.

He established Droga5, an avant-garde, independent ad agency network in New York and Sydney in 2006.
Posted by Roger Pe at 4:03 PM