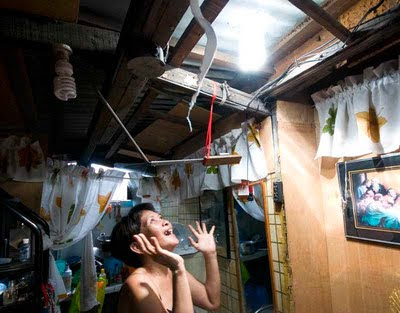 There is now light at the end of a ‘bottle’.

If you see some shanty roofs with protruding Pepsi plastic bottles, do not think that they have replaced old tires as protection from typhoons.

They’re actually lighting bulbs, slipped from outside and installed right in.

The bottles provide marginalized Filipino households with daytime lighting and it does not use electricity.

Last week the reward for Pepsi’s ad agency BBDO-Guerrero was electric. By focusing on the bottle a medium with which to provide light for residences of the poorest of the poor, the agency won for the country won its second Gold Clio. It was also a first for a high profile brand.

“It’s a tremendous achievement,” said BBDO-Guerrero Chief Executive Officer Tony Harris, who admitted that because Filipinos are more welcoming, “it’s more fun in the Philippines than in London,” his place of work prior to his Manila stint.

“It’s such a great honor for the Philippines showing the world that it is far more advanced by winning in a medium so innovative and beneficial to a lot people,” a proud Harris said in an interview.

Harris paid tribute to Pepsi as being supportive, encouraging and as a friend of the agency. He also exalted the agency’s energetic and enthusiastic talents. “They’re just teeming with ideas,” he said.

In the Philippines, where daytime lighting is a scarce commodity for the urban poor, millions of homes have no natural light source. Lights must be kept day and night causing electric bills to rise.

Thanks to the country’s most internationally awarded ad agency and Pepsi, together with MyShelter Foundation, they created the “Liter of Light” campaign, an initiative that provided communities with low-cost, carbon-free lighting solution using old plastic bottles.

Online and on the ground, BBDO-Guerrero made Pepsi a hero, bringing much hope to those who can’t even afford electricity.

In one of the virals, BBDO-Guerrero showed houses in a slum district in Manila, near a railroad track. The alleys are claustrophobically narrow.

Dingy, lurid, the atmosphere contributed to making it a virtually dark world. People either slept it off or stayed outdoors.

He taught many residents to do these simple steps: Punch a hole on a piece of metal roofing. Fill the bottle with filtered water. Add some bleach. Slip in the plastic bottle from outside in.

When already installed, apply some sealant. Make sure it’s tightly sealed by contact cement to make the roof leak-free.

The bottle refracts the sun’s rays to produce daytime lighting equivalent to a 55-watt electric bulb.

In a San Juan City shantytown, Christmas lights were on at nighttime but dark during the day. Pepsi solar bottles solved the problem and, voila, the residents had daytime lighting.

Shanty residents gave testimonies how a cola brightened their day. One said, his electricity bill went down, another said, it never heated up.

But the most remarkable thing said was it gave them hope from a life of abject poverty.

Pepsi, the agency and My Shelter Foundation seeked funding from a global audience to bring the gift of light to low-income communities in the country.

“Give the Gift of Light” e-card was launched using digital channels. Videos on YouTube, Facebook were similarly introduced. A “Bike for Light” was mounted as well as web banners strengthened the campaign to heighten awareness.

The e-card allowed individuals to donate directly to the project at www.aliterofkight.org, the website carrying the solar lighting project’s new global identity, a Liter of Light.

Result: Over 10,000 volunteers gathered, 20,000 bulbs were installed, 46,666 lives brightened. According to the agency, the project was recognized at the 2012 Pepsico Global Performance with a Purpose Awards.

It also gained the support of the Philippine government and was specially commended at the 2011 World Climate Conference covered by BBC, NHK and other networks and presented at TED X in Dubai and Mumbai.

Pepsi also exerted efforts in sharing the “Bottle of Light” initiative across other Pepsi offices around the world, notably Kenya, Uganda, Indonesia, Vietnam, India and Colombia.

CLIO Awards received over 11,000 submissions from countries worldwide this year. The complete list of winners in all categories is now available at: www.clioawards.com/catalog.

BBDO New York won as Agency of the Year, Ogilvy & Mather as Network of the Year, Volkswagen as Advertiser of the Year and Wieden+Kennedy London winner of the prestigious Hall of Fame Award.

If Cannes is the Olympics of advertising, the Clio is the most widely recognized and coveted symbol of ad industry’s creative achievements, gaining the reputation as the Oscars of advertising.