FILIPINO SPIRIT IS WORTH SERVING WORLD FOR 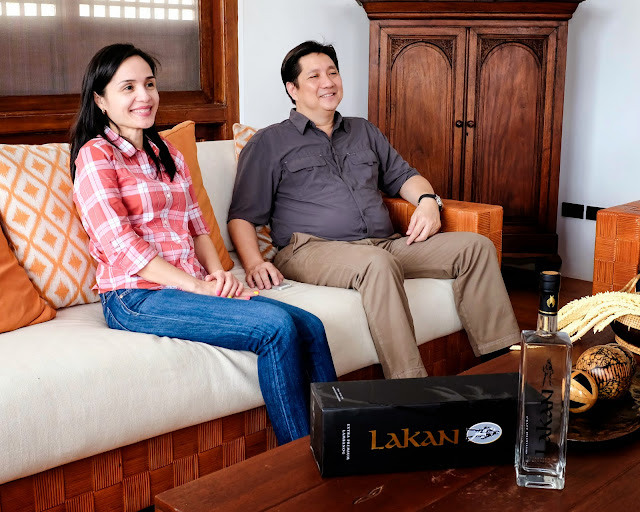 You cannot catch up with this man. Either he is always travelling the world to promote a Filipino pride to world- class status or he is in his farm to personally oversee the crafting of his ‘baby’, bottle by bottle.

Tony Manguiat is a corporate lawyer but the other side of him wants to see the Philippine “Lambanog” (coconut drink) elevated among the ranks of vodka, tequila, brandy, cognac, rum, among others, as one of the world’s most desirable drinks.

Humble enough to call himself a farmer and a “probinsyano”, Manguiat abhors the Edsa traffic and oftentimes escapes to his farm. In his beautiful Lipa hideaway, Manguiat is a different person altogether, a craft distiller of “Lambanog” and has upgraded it into haute liquor.

Manguiat wants to see a Filipino brand shine like a warrior beyond Philippine shores and accepted by global wine connoiseurs. He yearns to see a bigger market for local coconut farmers. Young, focused and unstoppable, he seems to have taken the cudgels for the dying coconut industry and is getting a headway.

At the 53rd World Selection of Spirits and Liqueurs by the prestigious Monde Selection International Institute, his extra-premium Philippine “Lambanog”, Lakan (named after a pre-Spanish title of nobility), stood out and was conferred with a Gold Award. 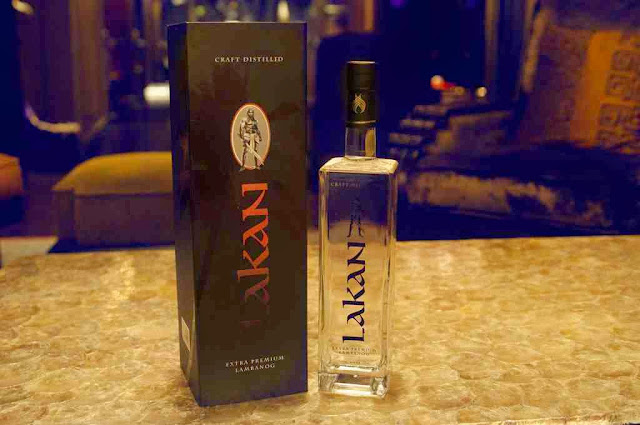 Why not? It is unique to the Philippines, made from fresh young coconut flower nectar and handcrafted by master artisans.

To create this pure, clean and natural liquor, it takes tens of coconut trees and meticulous multi-stage distillation process to make one bottle. Practically, all human senses are used to create this exceptional product at every level, produced in limited quantities of peerless, exquisite quality.

“Lakan’s victory is victory for the local coconut industry,” Manguiat says. He is set to travel to Lisbon to personally receive the award. 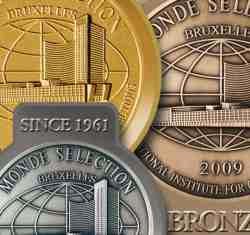 A brief background on “Lambanog” and the coconut industry:

The Philippines is the world’s second largest coconut producer, ranking behind Indonesia, as of the latest statistics by the United Nation’s Food and Agriculture Organization. Of the country’s approximately 12 million hectares of farmland, 3.56 million hectares are planted to coconut trees. Throughout the country, coconut is consumed and utilized in variety of ways.

An export-oriented sector, the coconut industry is under threat today. Though it contributes an annual average of 5.97% to the country’s gross value added (GVA) and 1.14% to gross domestic product (GDP), the country’s coconut regions that host it have the largest number of rural poor. Around 60% of farmers in these areas live below the poverty line.

From coconut comes the well-known “Lambanog”, created during pre-colonial times and mostly produced in Quezon province. It is neither wine nor gin, nor vodka but in a class of its own, handed down through generations of coconut plantation farmers.

The process includes collecting the sap from the coconut flower, like to rubber tree tapping. The sap is then fermented to turn into “Tuba.” It is then distilled to make “Lambanog”.

Four years ago, Manguiat was introduced to Lawrence Lim, a farmer considered by many as “Lambanog King” of Lipa and a walking coconut encyclopedia. The latter was so good at it that just by sniffing, he can tell a good “Lambanog” from a bad one.

Manguiat and Lim preferred the countryside than the hustle and bustle of the city. They would rather sip coffee and work at the farm, becoming the best of friends. “Lawrence is 67 years old and I am 47. He is an environmentalist and I am in charge of making sure that the “Lambanog” that we are introducing to the industry is done properly, mindful that we are doing it for the Filipino,” Manguiat says.

He values Lim’s advice who tirelessly reminds him that, “we are farmers first before we are businessmen.” Which means, he has to first take care of their agricultural resource in order to grow their business.

Farmers-at-heart, the two would often meet and discuss coconut farming that would last for hours. Their chats about the “Tree of Life” would result in producing the best “Lambanog” in the Philippines.

“We believed that “Lambanog” can yield the true Filipino spirit, steadfast and unyielding, one that is distinctly Filipino, a product and tradition that you will never find elsewhere in the world,” Manguiat says.

Manguiat and Lim eventually fell in love with “Lambanog” making and their passion is making local coconut nectar gatherers happy. From the early morning "tree crawl" of the “mangangarits” (nectar collectors) to harvesting coconut nectar from trees that run up to 30 feet high, he and Lim would exchange pleasantries like children, narrating to their amusement the prospect of making “Lambanog” famous the world over. 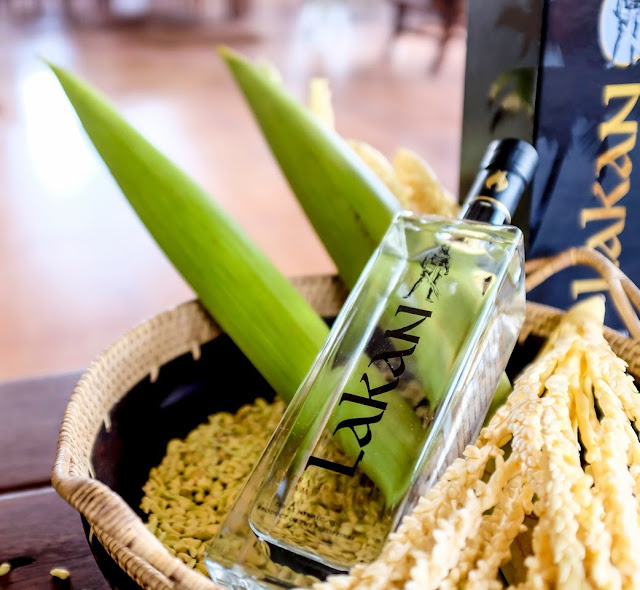 The Lakan distillery is nestled in a rustic farm where liters of coconut nectar are collected fresh on a regular basis.
Here, Lambanog’s purity is never compromised nor adulterated, it is meant to be romanced, distilled lovingly, and unhurriedly, not mass-produced like what industrial distillers do. Most importantly, it strictly follows the most hygienic standards set by the Food and Drugs Administration.

Manguiat has even commissioned a French craftsman to make a simple but sophisticated bottle design. To capture the Filipino “warrior” and “nobility” spirit, he engaged modern Filipino packaging designers to give it local color but with a world-class look.

The bottle looks like a work of art, made of sparklingly white crystal and weighs almost one kilo. The premium black packaging pictures a pre-Spanish Filipino royalty – the Lakan. Put side by side with the best in the world, it either levels up or stands out from the rest.

Thinking of giving your friends abroad with something they will never ever find anywhere else in the world? Lakan is the perfect gift and is available in Duty-Free shops.

Manguiat is tickled no end with the idea of the world finally tasting the famous Philippine drink that has character, sweet pungent scent, smooth and long finish.
“Most Filipinos know “Lambanog” but very few realize its huge potential. That is what we want to share with them, including the endless possibilities of the coconut tree,” he says with so much intensity. 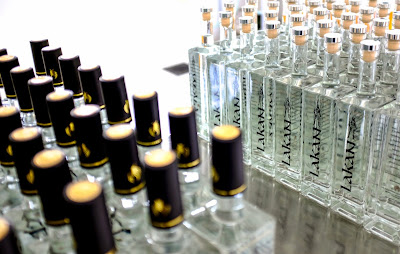 His vision is to make the Philippine “Lambanog” acknowledged by the world as a spirit category. He says the Philippines’ Lakan will be its answer to Japan’s Sake, Korea’s Soju, Mexico’s Tequila and Brazil’s Cachaca.

No one believed Manguiat when he first introduced Lakan to his friends. His drinking colleagues who’ve already disowned “Lambanog” could not be even convinced. One said: "I won’t ever go near a “Lambanog” again for the three days of hangover it gave me!”

The guy would eat his words. After enjoying Lakan, he would call Manguiat at 7 in the morning the next day saying: "You have to tell me: Why was there no hangover? And how the hell did I get home?" He replied: “There wasn’t any because you enjoyed one of the best drinks in the world and you were having the time of your life that we had to call your wife to bring you home."

During Lakan’s early development stage (when the bottle still had no label information nor government stamp), Manguiat had asked a French liquor expert to try it. After his fill, the guy asked Manguiat for its alcohol proof content. When he told him “90”, the guy asked his assistant to validate it.

Mr. Expert was astounded by the same result: 90 proof. He then jokingly asked Manguiat for Lakan’s formulation secret and seriously offered him to do a business venture.

For a guy who broke all rules in marketing (he had no market study whatsoever except intense belief in his product), Manguiat is a revolutionary brand warrior. When Lakan had its soft launch, guests couldn’t hide their excitement over the Philippine “Lambanog”, the drink that is on the cusp of being introduced to the world and served globally. “We are proud of the “Filipino Spirit” embodied in Lakan, resilient, strong and sturdy like the coconut tree,” Manguiat says. 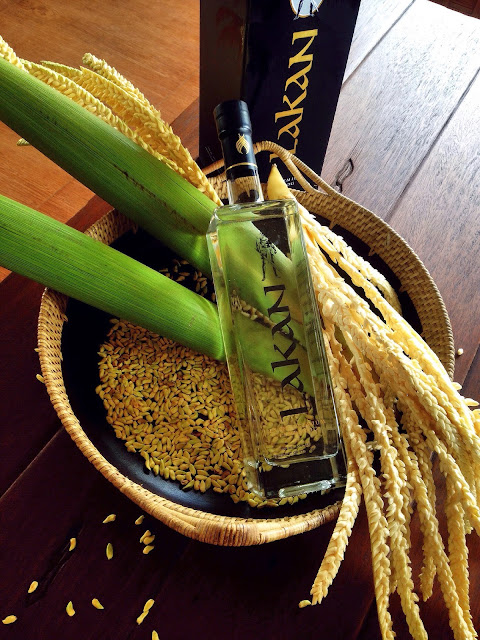