How would you feel if the same thinghappens to the Last Frontier? Indignation, outrage, fury, anger, unless you can’t see.

Would you just sit there and watch the unabated environmental plunder?

At the foot of Mt. Mantalinggahan, Palawan’s highest peak, are hectares and hectares of forest trees, breathing life to one of the most diverse flora and fauna species in the world. Imagine if they are burnt to ashesto give way to palm oil plantations?

Picture endemic animals fleeing from wildfires as their habitats are razed to the ground. Imagine if the already endangered “Pilandok”(Mouse Deer), “Tandikan” (Pheasant Peacock), “Balintong” (Armadillo), “Kiyaw”(Mynah), “Pikoy” (Blue-NapedParrot), “Katala” (Cockatoo), “Binturong” (Bear Cat) and many more continue to diminish in number. Can we all withstand the horrific sight?

Indonesia’s recent forest inferno can also happen in Palawan. We all knowthe catastrophic effect: the health-damaging hazecan blanket an entire town and spread across the country.

Can the impending environmental apocalypse happen? No, if we are doubly vigilant. No, if we are wide-awakeand say yes to doubly protecting Palawan’s protected areasfrom further damage.

Case-in-point: West Papua. Last October, the Indonesian paradisewith stunning rainforests and the world’s epicenter of marine biodiversity, boasting more species than anywhere else on the planet, became the world’s first conservation province by declaring it as a “conservation area.”

Symbolically important, it sealedthe future of the province’s irreplaceable ecosystems.

“The honor could have been owned by the province of Palawan, but sadly, people who profess love for the province just pay lip service to it. They are busy milking our natural resources not knowing that someday they will all be depleted,” says Art Ventura, an environmentalist by heart and former director of Palawan Council for Sustainable Development (PCSD).

Coral Triangle, the environmental bible says of the West Papua move: “It created a legal framework for conservation efforts in one of Indonesia’s most beautiful regions, a role modelfor more effective conservation efforts.” The bold vision was initiated upon consultation with the provincial governor, Abraham Atururi.

Mount Mantalinggahan is a vast mountain range that covers four towns.It is home to indigenous Palaw’ans and one of 11 important bird areas in the province, as well as one of only 10 sites of the Alliance for Zero Extinction sites where various species are in imminent danger of disappearing in the Philippines.


Puerto Princesa’sSubterranean Park, a Unesco World Heritage site and one of the world’s seven wonders of nature,is where the Underground River flows.

Rasa Island is home to the Philippine cockatoo, now facing extinction with only around 1,000 remain. The island, of all places, has been chosen for a coal-fired power plant.

For the benefit of the uninitiated, the reinforced NIPAS is a congressional bill under Republic Act 7586, which aims to replace, expand and strengthen the 23-year-old NIPAS Law. Once enacted into law by Congress, it will provide greater protection for the environment, especiallyprotected areas in the Philippines. 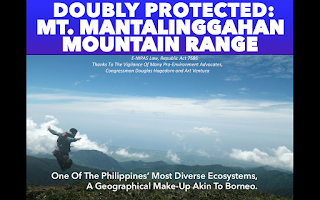 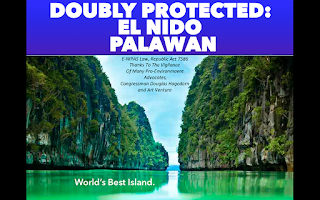 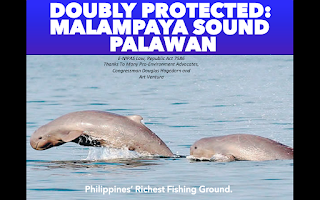 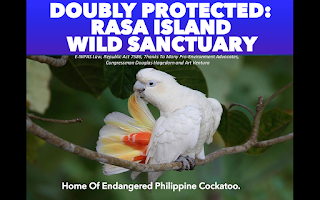 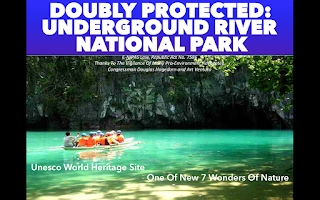 In Congress’ executive committee meeting held last November 11, Rep. Douglas Hagedornof Palawan disputed the exclusion of five Palawan protected areas from the bill saying the deletion was anomalous as it did not have the committee’s approval.

Hagedorn had earlier discovered the deletion and argued that groups with ulterior motivesor otherwise, cango around PCSD and open these areas to environmentally damaging activities like “regulated mining” in protected areas, an activity banned by the ENIPAS.

Rep. Franz Alvarez and groups identified with Governor Jose Alvarez, however,asserted that Palawan does not need to be in the NIPAS, as the province already has its own Strategic Environmental Plan (SEP) under Republic Act (RA) 7611.GovernorAlvarez is currently pushing for construction of a coal-fired power plant in the province, a move being heavily opposed by environmentalist groups.

They said inclusion of five Palawan protected areas to the expanded NIPAS Law would give double protection for the province’s ecologically critical sites.

“If the Alvarezes are really interested in environmental protection and preservation as they claim to be, why object to Palawan’s double-barreled protection?”Hagedorn asserted.

Pro-environment Senator Loren Legarda,vowed no exclusion of 5 Palawan protected areas from the rest and has also urged the committee to fasttrack the approval of the new NIPAS.

Without the vigilance of Rep. Hagedorn, the House Committee on Natural Resources would have passed a bill favoring coal and non-renewable energy, mining and other business interests. At the end of the session, five Palawan Protected Areas were restored in the original list and R. A. 7611 (Strategic Environmental Palawan) was made consistent withthe new ENIPAS.
Posted by Roger Pe at 7:24 PM