THEY MADE MILLIONS OF FILIPINOS WORLDWIDE HOMESICK 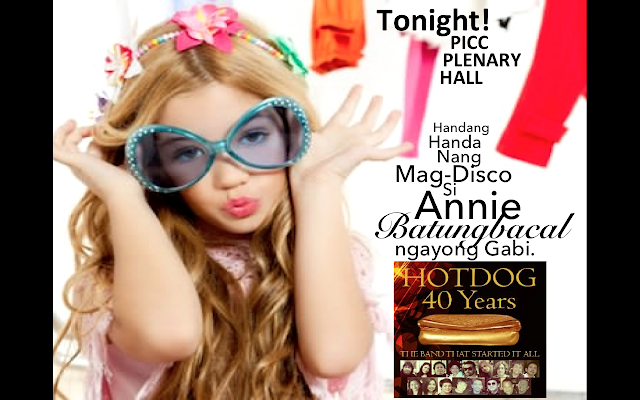 While waiting for the rehearsal to start, Susan Garcia, sister of Rene and Dennis Garcia of Hotdog fame, was in a frenzy, talking to some very important guests on her mobile phone. She needed to secure front row tickets for them.

At the rehearsal room, new Hotdog singer Miles Poblete was gliding through the lyrics of a song. With eyes closed, you can sense that she was feeling the mood, singing from within and giving it all.

To an ordinary listener, that would merit a 10. But Rene, lead guitarist and vocalist of the iconic band, would push her, coaxing her that she could outdo herself.

In those tiring rehearsals, it was tempting to drop an octave while singing passionately. There were possibilities, too, to make the repertoire perfect. Rene was there - to pivot everyone, to sing flawlessly and perform with oomph.

In a Makati recording studio where Garcia and his group were preparing for “Hotdog: 40 Years” concert, each song had to be rendered perfectly, every line must be delivered from the heartand not just being blurted out.

They were what you call the nuances of the song ordinary listeners do not “see”. 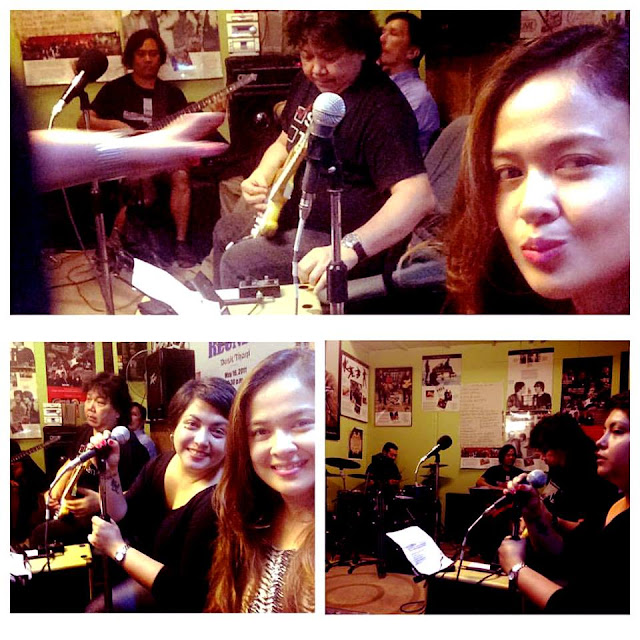 Under Garcia, one’s voice would go to an altitude spin. Would he tell you if a pause was necessary? Yes. Would he tell you, that to be able to sound like a nightingale, emotions and the right vocal tickle would make a difference? Absolutely.

The scene went on and on until perfection was reached. It was the same with the guys who were manning the bass guitar, drums, keyboards, percussions and alto sax.

Some may call it,the Garcia ‘Bandrobatics’. Here, your voice is maneuvered to roll and take vocal loops. Sideward and upside down, the texture of “Manila Sound” was like a plane designed to hold the audience spellbound. 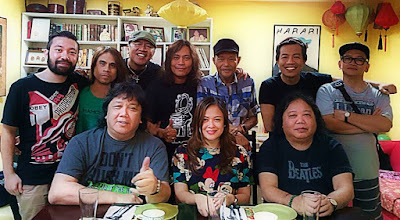 “When you do a concert like this, you should aim for perfection,” Dennis Garcia, bass guitarist and principal auteur of all Hotdogs blockbuster songs, underscoring his musical standards.

“You need to uphold the Hotdog legacy that made generations of Filipinos from all walks of life “kilig”, he says.

Dennis, together with his younger brother Rene, past and present female vocalists and new generation of Hotdog artists, performed last December 3, 2015 at the PICC Plenary Hall to SRO crowds. The country’s current hottest band, “Up Dharma Down” was their special guest. Presidential candidate Grace Poe and Senator Bongbong Marcos were there to give them support. 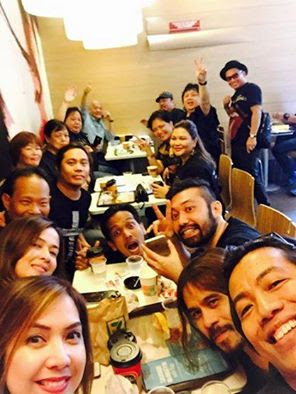 The event celebrated Hotdog’s Ruby anniversary (40 years) in the entertainment world, with over 600 songs written over a span of four decades, several dozens of them turning into classics and became soundtrack of multiple generations.

It took Hotdog, the band that started it all, to bridge the big Philippine social divide with its romantic, true-to-life songs, gems that had a pack of wicked wallop.

They made Filipinos throw their colonial mentality away into the garbage bin. The band made Taglish cool, collegialas and boys from exclusive schools rocked and jammed with them in schools gigs.

When most local artists were copycats of foreign songs in the 70s, Hotdog was the game changer and was “orig”, proudly born in the Philippines.

The birth of "Manila Sound" was the dawning of a new era with most of Hotdog compositions achieving platinum status.

Many bands followed Hotdog’s footsteps but its trademark originality made it a cut above the rest. 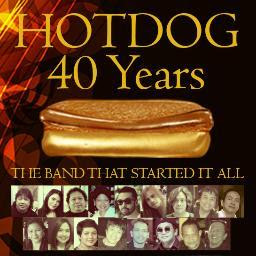 Named Filipino artists like Gary Valenciano, Eraserheads, Side A, Parokya Ni Edgar, Acafellas, True Faith and several others paid tribute to Hotdog songs and did their own versions. Fil-British Singer Charlie Green even covered “Pers Lab”.

For its extraordinary contribution to Philippine music,  Hotdog received a Lifetime Achievement Award from the Metropop Foundation in 2001 and was honored with the same award by the Awit Awards and Original PinoyMusic (OPM) in 2009 and 2010.

Philippine Daily Inquirer picked Hotdog as one of the 20 most important composers of the 20th century in year 2000. Previously, the National Press Club gave the band Best Performer Group Award in 1975.

On his Facebook timeline, Dennis said of the band’s “40 Years Concert”: “We did not do it for the money but to show our gratitude to a nation that has been enjoying and building memories around our lovingly crafted music for four decades.”

If plans push through, Hotdog’s “Manila”, the song,will be immortalized in all Philippine Airlines’ flights, a feel-good strategic move long overdue and could have been one of the best tourism advertising campaigns we never had.

Oftentimes used without permission and remuneration, “Manila” is a national anthem by default, for those returning to the Philippine capital or by millions of Filipinos scattered all over the world. 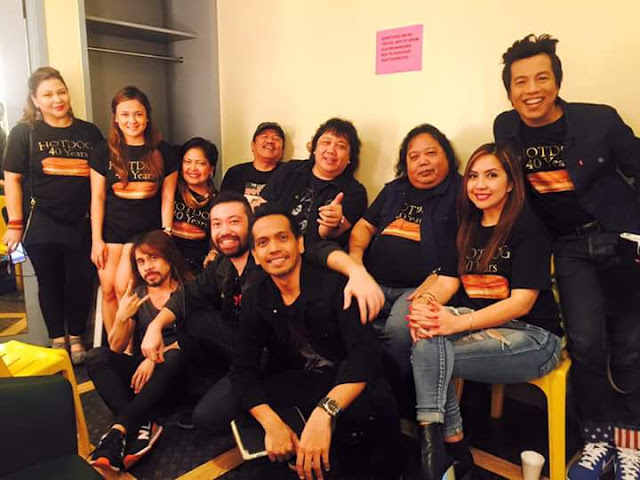 Pulse of the Filipino

“Hotdog knew how to speak the language of the audience, all the more with self-deprecating humor. “Ikaw Ang Miss Universe Ng Buhay Ko”, for example, was not only about pageant-crazy Filipinos but also a tribute to women regardless of social status, beauty queenor not,” says a loyal fan.

“Annie Batungbakal” also became a successful movie with Nora Aunor and Vilma Santos wanting to star in it. Aunor eventually got the plum role.

Dennis takes pride in shouting to the world that God has been good to Hotdog for giving his band “the most talented and prettiest singers.” 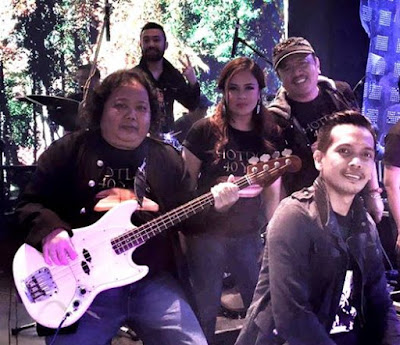 “Our songs have human insights and based on universal truths, love and affection and real emotions. We are just being as honest we can,” Dennis says.

When he writes a song, Dennis does not wait for the moon and the stars to shine. It just happens.

“I guess it’s just being as human like anyone else,” Dennis says who was an advertising copywriter and Creative Director who have penned many memorable San Miguel Beer taglines like “O, Anong Sarap”, “Isa Pa Nga”, and “Kahit Kailan, Kaibigan”.

The band has performed in all continents of the world (except Africa and South America), spreading Pinoy music that as original and true-to-life as “mga dyipning nagliliparan” (speeding jeepneys) and “tigyawat sa ilong” (pimple on the nose).

Just recently, Hotdog performed in London and plans are afoot to do more in Rome, Dubai and other parts of the world with large Filipino communities.

With history kind to the band, Rene, however, has one big lament: Filipino musicians (songwriters, drummers, guitarists, pianists, and other instrument players), the backbone of any concert, continue to take a back seat and being pushed as second-class citizens in the country. He wants to fight for them and he is referring to Filscap (Filipino Society of Composers, Authors and Publishers).

“Instead of enriching themselves, Filscap should care more about Filipino musicians and guide them. They shouldbe more transparent,” he says. 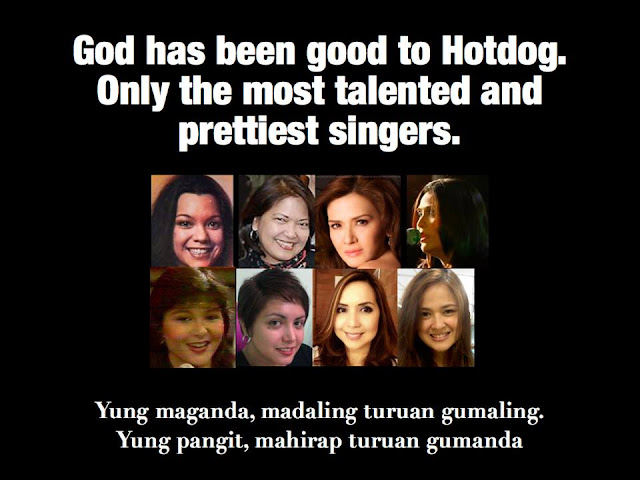 Rene is also one of the founders of “BandangPinoy”, an organization that helps aging musicians develop new skills and find work. “Most musicians at the peak of their careers do not save up for their future. When contracts are hard to come by, they find themselves at the losing end,” he says.

On question most people ask: “We came up with a name that has double meaning and we did it intentionally. I wanted a name that was “medyo bastos” (a bit kinky) for a bit of a recall,” Dennis says, who also did the lyrics of the band’sf irst album,“Unang Kagat". 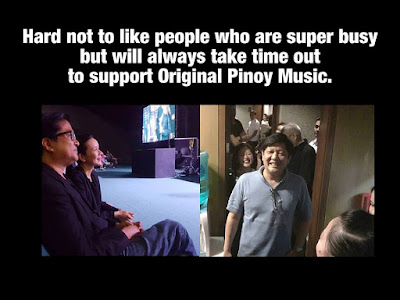 Rene and Dennis would recall that they were given graveyard shifts at the recording studios because nobody would believe in them. Technicians were grouchy old men and would fall asleep waiting for them. When “Ikaw Ang Miss Universe Ng Buhay Ko” became a big hit, everyone chased them. The rest is rocking history.  Hotdog’s music is now archived in Philippine music history. It has carved a nameso rich and solid it cannot be erased from the books.