DINNER IS READY, GMOs ON THE MENU

by Roger Pe
Philippine Daily Inquirer
March 9, 2016
How would you like to eat fruits and vegetables bred practically from a science laboratory? Would you put them on the table and serve them to your loved ones?

Eggplant Omelet, for example, or “Pinakbet”? And for your dessert, what about strangely huge looking Papaya you thought didn’t previously exist?

GMOs (Genetically Modified Organisms) are animals, fruits and vegetables changed by genetic engineering. They have been subject of many intense debates here and abroad.

GMOs have genes of another species inserted in their species (example, gene of bacteria inserted into genes of corn).

Proponents of GMOs argue that genetic engineering results in increased crop yields, reduces costs of food production and the need for pesticides. They also cited enhanced nutrient composition, food quality, resistance to pests and diseases, and greater food security to the world's growing population as among its benefits.

A number of animals have also been genetically engineered to increase production and decrease vulnerability to disease. GM Salmon, for example, are engineered to grow larger and mature faster.

But are they really safe?

Consumer Rights for Safe Food (CRSF) founding president Grace Padilla-Chua is asking the government to practice caution. It should do actual studies on the effects of GMOs on the health of humans and animals before allowing GMOs into the country and into our food supply.

“Many countries have recognized the dangers of GMOs and have banned them. I hope our government does the same,” she says.

According to American Academy of Environmental Medicine (AAEM), GMOs are unhealthy. Here are their findings:

GMO Proponents say that GMOs, when eaten by humans are harmless because they are completely digested.

A Canadian study shows though the toxic insecticide produced by GMOs was in the blood of Canadian women and in unborn fetuses. Genes inserted into GM soy, for example, can transfer to the DNA of bacteria living inside humans, possibly causing long term problems.

AAEM also says numerous health problems increased after GMOs were introduced in 1996. The percentage of Americans with three or more chronic illnesses jumped from 7% to 13% in just 9 years, food allergies skyrocketed, and disorders such as autism, reproductive disorders, digestive problems, and others are on the rise.

The American Public Health Association and American Nurses Association are among many medical groups that condemn the use of GM bovine growth hormones, which are injected into cattle so they produce more milk. 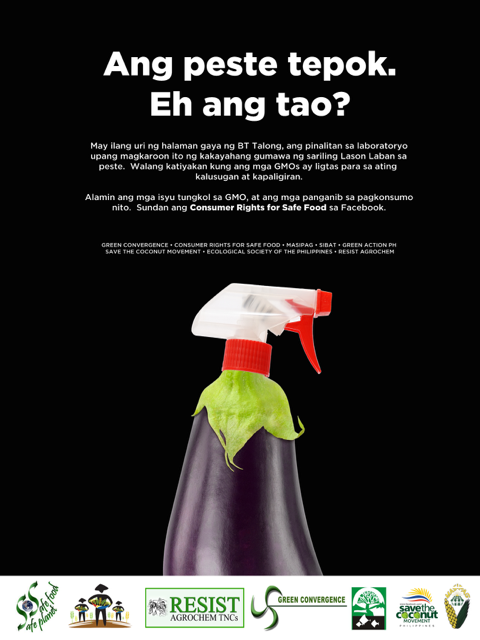 The milk produced from treated cows has been found to have more pus and antibiotics. It is also found to have high levels of a hormone, which is linked to cancer.

GMOs contaminate forever. GMOs cross-pollinate and their seeds can travel. Once released into the environment, it will be impossible to fully clean up our contaminated gene pool.

GMO contamination has also caused economic losses for organic and non-GMO farmers who often struggle to keep their crops pure.

GMOs increase herbicide use. Most GM crops are engineered to be “herbicide tolerant”. Between 1996 and 2008, US farmers sprayed an extra 383 million pounds of herbicide on GMOs causing farmers to use even more toxic herbicides linked to sterility, hormone disruption, birth defects, and cancer.

Government oversight is dangerously lax.
Most of the health and environmental risks of GMOs are ignored by governments’ superficial regulations and safety assessments.

Independent research and reporting are suppressed. Attempts by media to expose problems are also often censored.

GMOs do not increase yields, and work against feeding a hungry world. Whereas sustainable non-GMO agricultural methods used in developing countries have conclusively resulted in yield increases of 79% and higher.

GMOs do not, on average, increase yields at all. This was evident in the Union of Concerned Scientists’ 2009 report Failure to Yield―the definitive study to date on GM crops and yield.

GMOs have nothing to offer the goals of reducing hunger and poverty, improving nutrition, health and rural livelihoods, and facilitating social and environmental sustainability. 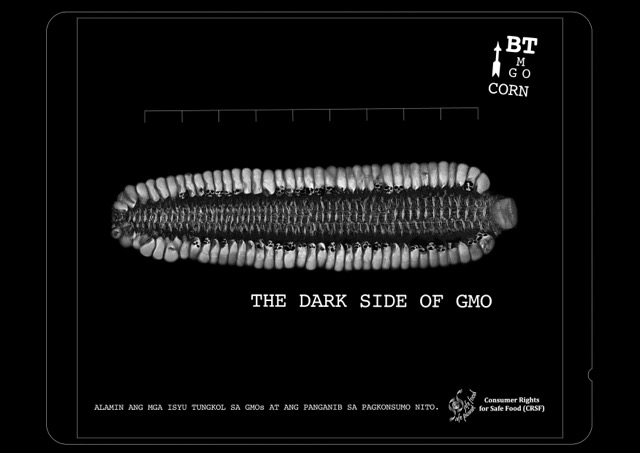 On the contrary, GMOs divert money and resources that would otherwise be spent on more safe, reliable, and appropriate technologies.

Half the world has banned GMOs because of studies showing it is associated with cancers, allergies, Infertility, and more.

The Philippines, a trailblazer for GMO in Asia, expects to finalize a new set of rules on GMOs after the (Supreme) Court demanded an overhaul of previous regulations.

Several groups like Greenpeace, Magsasaka at Siyentifiko Para sa Pag-unlad ng Agrikultura, Green Action PH, Advocates of Science and Technology for the People, Pesticide Action Network Philippines, Kilusang Magbubukid ng Pilipinas and the Center or Health Initiatives and Management of Eco-systems and the Consumer Rights for Safe Food have also urged Agriculture Secretary Proceso Alcala not to rush the issuance of rules and regulations on GMO feeds and crops.

Consumer Rights for Safe Food has done an advertising awareness campaign to inform the public against the dangers of GMOs and its effect on people’s health. We are reprinting some of their impactful outdoor ads.
Posted by Roger Pe at 3:54 AM