In a country where the arts flourish and influence much of the world’s civilization, it is probably tough to excel, much more, be accepted if you are Asian.

In a city where actors Marcello Mastroianni, Franco Nero, Roberto Benigni and many more sparkled in movie marquees, what space is there left for a Filipino?

Nolasco ‘Noly’ Sta. Isabel is one Filipino his ‘kababayans’ will definitely be proud of. He is maybe unknown in the Philippines but he has broken mainstream in Italian cinema, making the big Filipino community in Rome proud and happy.

He is probably the only Pinoy who has performed in Teatro San Babila, a landmark theatre in Milan where comedies, thrillers, musicals and other traditional stage plays are regularly mounted featuring famous Italian names.

Sta. Isabel started in “Terra E Cielo” (Heaven and Earth), a successful stage play that had record-breaking 40 repeat performances when it ended its season.

He was on a roll after that, becoming the central character of the highly popular “Don Matteo2”,
an Italian ‘teleserye’ on primetime starring former Hollywood actor Terence Hill as an investigating priest.

His first break in Italian movies was as an extra in “La Casa del Sorriso (House of Smile), a film directed by award-winning Italian director Marco Ferreri, winner of a Golden Bear award in 1991 Berlin Film Festival.

A long time resident of Italy (he came as a tourist in 1985), Sta. Isabel started at the bottom of the food chain and worked his way up – from dishwasher to chef to most trusted manager of a restaurant he first worked for.

When he decided to leave and pursue another career, the resto owner offered him a car just to stay. He politely turned it down reasoning out he wanted to change the course of his life in Italy.

Carvosi was doing a collaborative work with an Italian television station costume tailor when he received a call from writer-theatre director Roberto Cavosi. When they met, the latter explained that he was not looking for a costume maker but an actor. He replied saying he had never acted before but is willing to audition for the part.

At the acting workshop, Sta. Isabel cried a bucketful of tears, impressing Cavosi. He was instantly made part of the cast, brought to Milan with five other seasoned actors and performed in Teatro Babila. Good reviews became his stepping-stone to the Italian movie industry.

A few months prior, he was part of Kasarinlan Cultural Dance Company, a dance group based in Rome promoting Philippine culture through dances and songs all over Italy and other European cities.

When movie offers started to trickle in, Sta. Isabel divided his time working in the restaurant and self-managing his acting career.

Conflicts in schedules would arise, preventing him to appear in movie projects. There were instances his employer would not allow him to attend shoots because of his duties at the restaurant.

“Unti-unting namamatay ang spirit ko” (my enthusiasm would slowly fade away), he says. Following his heart, he would leave his job and choose to go full-steam ahead with acting. He said, he chose it in order to be “happy”.
Sta. Isabel acted as his own manager and was always on the lookout for movie assignments, constantly scanning Rome’s film houses for auditions. “It’s a tough challenge because there are not too many good roles for Asians,” he says.

When roles are far and few in between, he uses his other talent to be more productive and creative. He teaches students to design, cut and sew dresses, a business that has become lucrative and kept him busy.

Most of her students are Italians, women who are accustomed to the styles of Armani, Versace, Dolce and Gabana and many more. His creations are also often time shown in Filipino gatherings of the Philippine embassy.

Born in Montalban, Rizal, where every neighbor was a relative, Sta. Isabel, together with a younger brother was brought up to help in the family poultry and piggery business. Recalling his early childhood days, he and his brother would work all day in the animal farm till they got dirtied with mud all over.

His parents inculcated in him the value of hardwork. In grade school, he did errands, for his mother who worked in the school canteen.

He spent high school in Roosevelt College Marikina, went to De La Salle-Araneta University and graduated with a Doctor of Veterinary Medicine degree in just 5 years. He became a licensed veterinarian at age 21.

He taught at the Visayas State University in Leyte two months after passing the board exam. After almost two years, he realized he wanted to work abroad to help his family and enjoy a European lifestyle.

In the mid 80a, with a little help from a college friend, he arrived in Italy to fulfill a dream, study in a fashion school in Rome. That dream has come true.

“It is not easy to work in a foreign land. You need to know the language and culture to get by. It is good Italians are Catholics like Filipinos, that eases up a bit,” he says.

Whether he is happy or not, Sta. Isabel has already adjusted to his second home. “Pag may problema, alam ko na kung paano ko malulutas ang mga ito (when problems arise, I already know how to fix it).

He is thankful for the opportunities that keep on coming his way but intimates that there are still many things he wants to do.

“It’s not always fun to be an actor and a designer at the same time in Italy where the word “Filipino” is spelled with double “p” and synonymous to domestic helper,” he says.

When he was starting with his movie career, Sta. Isabel was always the underdog but his insistence and passion would always pay off.

“Madalas, walang pumapansin sa akin sa auditions (I am always ignored most of the time). He would always be the only Asian who would turn up. “Just reading people’s body language, I can feel that I was being discriminated upon, “ he laments.

Not wanting to get affected, Sta. Isabel focused on improving his craft. Determined to shine, people’s impression of him eventually changed.

In Rome, where concentration of Filipino workers is big, Sta. Isabel always thinks about his ‘kababayan’.

He wants employers not to take advantage of them. “Some of them do not give the benefits they’re entitled to, others do not legally arrange their working permits, some, treat them like machines, a story that gets repeated time and again,” he says.

He attends Filipino social functions when he is not busy acting or attending to his design class. Believing that one can change his destiny in life, Sta. Isabel encourages young Filipino workers to improve themselves and not follow their parents’ footsteps who got stuck where they are right now. He wants them to help upgrade the image of Filipinos in Italy.

As a long time Italy resident, Sta. Isabel observes that Filipinos are generally united in Italy but “regionalism and crab mentality still exist,” he says.

“Meron namang mga taong parang wala kang nagawa” (there are people who think you have not achieved a thing) but what’s important to me are comments of people who are positive in life,” he says.

He is not happy that a lot of Filipinos in Italy have not evolved and got stuck being domestic helpers, some for even up to 30 years. “Sayang, hindi nila sinubukang ibahin ang work nila, (what a waste, they didn’t try to change their status in life).

“Italians love Filipinos but at the same time think we are all domestic helpers, an unfair mindset that has become a “trademark,” he says.

Would he encourage Filipinos to work abroad? “Working abroad can upgrade one’s life but it is not the only solution, he says. “We can start innovative businesses in the Philippines, sadly, opportunities are few.”

What does he like about Italians? “Italians are practical people, they quarrel and exchange bad words but it’s all gone in five minutes. We Filipinos remember bad words said to us till we die. Italians do not to think much of what people say against them. They love their cities, they always maintain cleanliness and peace and order,” he says.

“Wala na akong panahon sa homesickness,” Sta. Isabel says on being asked about if he misses the Philippines. 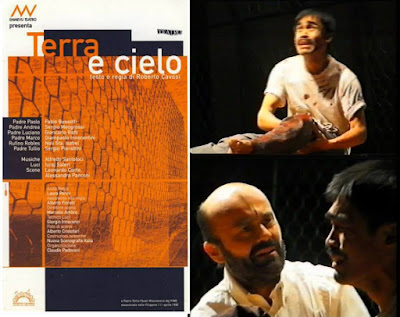 Is he able to save much? “I was the breadwinner for many years, so I’ve provided my family with their needs. Money has never been a big deal to me, I can give priorities to things that embrace my passion even without money,” he philosophizes.

Sta. Isabel wants to open a business when he returns to the country of the Philippines. “But while I’m still here, I would like to focus on creating my own “name” in acting.
Posted by Roger Pe at 6:40 PM