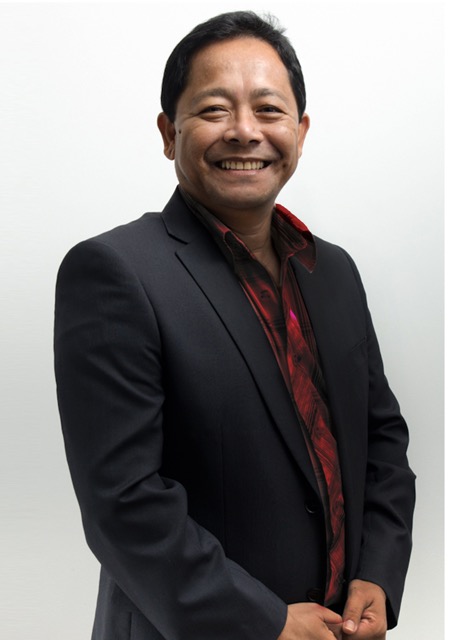 There are many products that do not become brands and eventually become failures. Blame it on hit-and-miss marketers who do not begin with the basic: Market Research.

Market Research has been called the bedrock of brand success. When companies ignore it for new product development or testing new advertising campaigns, the result often becomes disastrous. Millions of pesos are wasted from failed new product launches, precisely because consumer research was not done, improperly executed or results were ignored.

Market Research veteran and broadcast industry icon Nic Gabunada has seen it all. Afterall, he was General Manager of Media Pulse (predecessor of AC Nielsen), former head of ABS-CBN Research and Business Analysis, eventually Senior Vice President of the same network’s Integrated Sales and Marketing. He was also CEO of Omnicom Media Group, driving the group's media brands like OMD, PHD and M2M, as well as its ideation, digital and brand-engagement specialized units to profitability.

Let’s take a look how he landed in Research and Broadcast Media. Gabunada begins by saying, “I call it “Serendepity. It was not planned.”

The year was 1984. Gabunada was then a Research Tutor at Center For Research and Communication (CRC), now University of Asia-Pacific). Back then, he was also a teacher at University of the Philippines College of Manila, and part of the anti-Marcos movement.

He remembers the crisis the country was going through. The economy was spinning downwards after Ninoy Aquino’s assassination. The anti-Marcos movement was gaining momentum, and he, a year earlier, finished graduate studies in Industrial Economics.

“That was a period in my life that I built a network of connections within the marketing and research industry. I met the country’s top marketing, advertising and research practitioners and learned from them. I was surprised to hear them admit that they also learned something from me,” he reminisces.

It was a time that sharpened his leadership and organizational skills, providing him a good laboratory to craft his communication (anti-Martial Law propaganda) strategies. He implemented them and made sure these were cascaded to help mobilize people into action. The same experience may have also developed his preference to stay in the background. 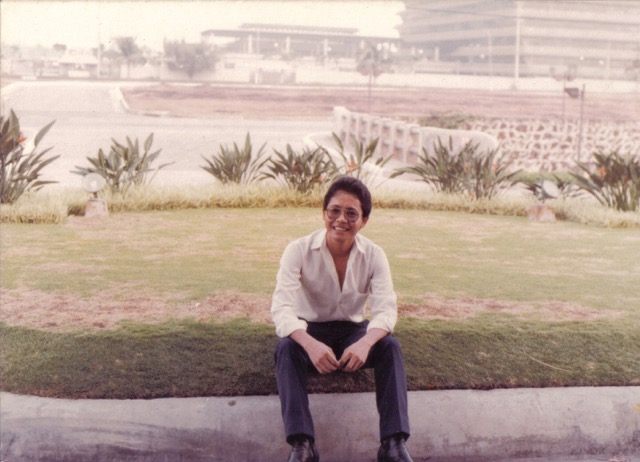 “My first job (at around 11 years old) was a shoeshine boy and a farm goods trader at our town market. I made shoes glisten and on the side, bought farm livestock from farmers and resold them to buyer-consolidators. Strictly speaking, I was not buying but simply facilitating the exchange.”

Gabunada earned more than enough for his school allowance. He gave the rest to his parents and shared it with his siblings. In college, he was a scholar and earned extra by giving tutorial lessons to students who were having difficulties coping up with their academic requirements.

He taught Mathematics at Ateneo de Davao University after college but was detained because of his anti-Martial Law activities. To “cool off”, he transferred to Manila and took graduate studies at CRC, an Opus Dei institution, perfect training ground for those who wanted a career in economics.

A Hans Seidel Foundation scholarship would fall on his lap, in exchange for working with CRC for 3 years after graduation. He became an economist at the center’s Industry Monitoring Unit, assigned to cover all consumer industries such as fast moving consumer goods, pharmaceuticals, QSR (quick service restaurants), among others.

He eventually became the point person for CRC’s economics of marketing seminars where he worked with industry icons in marketing, advertising, sales and distribution. They were the rock stars of the marketing industry whom he invited as trainors: Among them were JJ Calero, Minyong Ordonez, Jess Dinglasan, Ely Santos, Benjamin Dy, etc. 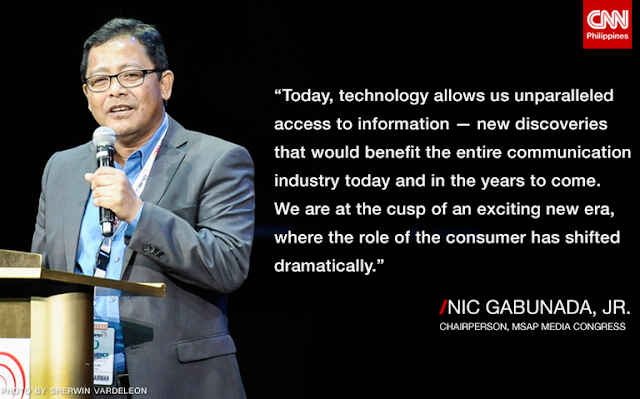 He then joined Pulse Research Group under Rosario Chiew, known to be the doyen of market research in the Philippines. He was appointed General Manager of Media Pulse, the arm doing research on media habits of consumers. That exposed him to network executives and advertising agencies and had an inside track of what they were doing, type of information they needed and their decision-making processes.

The company provided audience research studies and measurements to advertisers, ad agencies and media suppliers (radio and TV networks and print publications). Gabunada helped set up what became popularly known as the TV people meter, a first in the country.

“I was challenged and got excited with the task of providing the industry a concrete basis for their advertising and media planning,” he says. It was a more accurate way of reading TV viewing habits. In his job, Gabunada had the chance to go around the country doing studies on media habits of regional consumers as well as familiarized himself with media facilities outside of Manila.

He joined ABS in 1990 as Head of Research and Business Analysis, and was in that post till 1997. He transformed the unit into a group that is responsive to the strategic and operational requirements of the network. 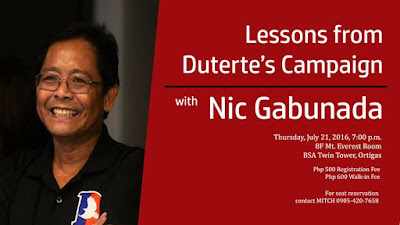 I only “left” Research, when to my surprise, I was called by Freddie Garcia to his office in 1997 and was instructed that from that point, I was to take the role of Head of Sales and Marketing of ABS-CBN. I asked if I have a choice and he said “No” but assured me that he will teach me the tricks of the trade, which he thought I still have to learn. More importantly, will personally call his close friends in the industry to also mentor me,” he proudly relates.

At the time of his appointment, the network was facing an advertiser/ad agency boycott, a full steam test for his negotiation skills to resolve critical issues. Despite losing more than two months of revenues because of the boycott, his team ended the year hitting the company's revenue targets.

As head of Sales and Marketing head of ABS-CBN, his key achievements were: Quadrupled company revenues from P266M/month in 1996 to more than P1B/month in 2005 and never missed hitting revenue targets during his stint.

He also institutionalized the use of program intrusions, events and other below the line activities in order to generate audience and customer affinity to the various channels offered by ABS-CBN as well as designed and implemented a competitive commercial spots monitoring system.

Why is consumer research important in developing a media strategy? Gabunada says, ”You have to understand your target market in order to best craft your message, what to communicate, how to communicate, which geographic unit to target, which medium/media is best for your message,” he says. 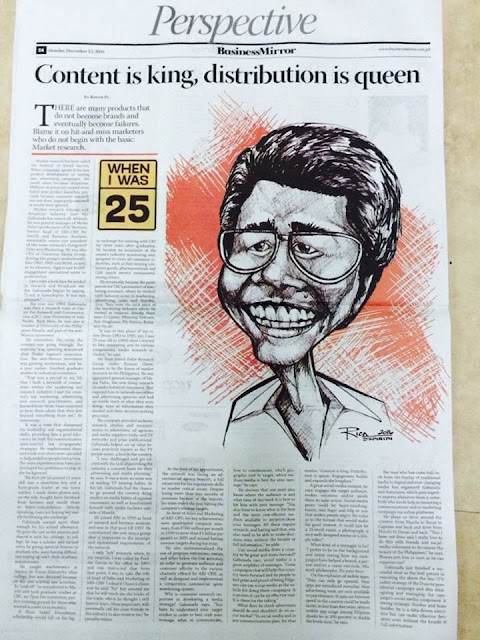 He stresses that one must also know where the audience is and what time of day/week it is best to hit him with your message. “You also have to know what is the best and the most cost-efficient medium available to air/print/show your messages. All these require research, and having said that, you also need to be able to make decisions even without the benefit of full information,” he adds.

Can social media drive a country to be great and move forward? Gabunada says, social media is a great amplifier of messages. “Great campaigns that will help this country move forward and its people to feel great and proud of being Filipinos can use social media as the vehicle for doing these campaigns. It is proven it can be an effective tool. It is there for the taking.”

What does he think advertisers should do and shouldn’t do on social media? “In social media and in any communications plan, for that matter, “Content is King. Distribution is Queen. Engagement builds and expands the Kingdom.”

A great social media content he says engages the target audience, evokes emotions and/or prods them to take action. Social media posts could be heart touching, funny; may “hugot” and “kilig” or one that makes people angry. No rules as to the format that would make for good content. It could just be a 25-word tweet, a photograph, a very well designed meme or a simple video.”

What kind of a manager is he? “I prefer to be in the background and enjoy seeing how my campaigns have helped a brand, a person and/or a cause succeeds. His work philosophy: Do your best.

On the explosion of mobile apps: “They can only go upwards. New apps are introduced everyday. New advertising tools are now available to practitioners. If only our Internet speed in the country could be made faster, in less than five years, almost mobile app usage among Filipinos should be at 100% or double the levels now,” he says.

The man who has come full circle from the heyday of traditional media to digital and ever-changing media has organized Gabunada and Associates, which puts together experts whenever there is somebody who needs help in mounting a communications and/or marketing campaign via online platforms. 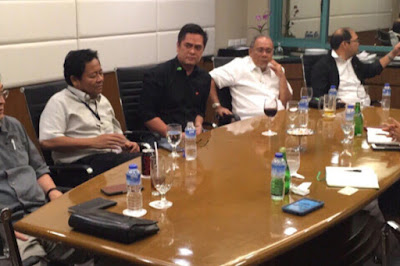 He plans to drive around the country, from Manila to Ilocos to Cagayan and back and drive from Manila to Davao and back. “This I have not done and I really love to this with friends and social media volunteers to document the beauty of the Philippines<” he says. Wanna join him as soon as he can organize one?

Gabunada just finished a successful stint as the lead person in executing the above the line (TV/Radio) strategy of the Duterte Presidential campaign and also strategizing and managing the campaign’s social media component. A strong strategic thinker and team builder, he is a data driven executive but can make effective decisions even without the benefit of full information.
Posted by Roger Pe at 11:48 PM