THIS AD IS CHEESY BUT CUTESY 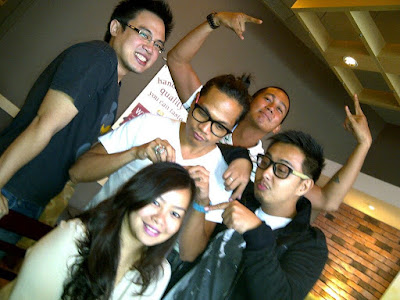 Filipinos they say are fond of drama, that is, when we are engulfed with too much emotion, we tend to overdo it. Are we really overly dramatic or is that an Asian thing?
Well, some people say people from all over the world do the same. When an event happens, they always feel they should have a part in it to feel important.
“Filipinos are thoughtful and caring, it’s our way of expressing we are concerned about someone we know or don’t know,” a friend told us.
Here’s one that’ll make you chuckle: “We have a natural talent for emoting.”
Emote. Hmm, interesting word. Also, perhaps the root word for an ad series that’s not only been getting a big slice of awareness recall, driving people nuts to this pizza chain for delicious cheesy delights, and one that served as an insight and springboard for a campaign that’s raking in the sales.
We’re talking about Greenwich Extreme Cheese Pizza tv commercials - where the agency used the “cheesy” side of Pinoy to mount a successful sales-generating blitz.
How does it feel to be in a mushy situation, when you’re caught unaware displaying your affection to friends?
CJ Jimenez, Publicis-Jimenez Planning Director says, “People believe what happens in real life. When you portray real emotion and reflect it in your ads, you endear yourself to target. It may be embarrassing but who cares? It is just being human, a universal truth,” he says.
On a busy city intersection, a guy (played by budding actor Lloyd Zaragoza) crosses the street not knowing he is about to meet an accident. His eagle-eyed buddy (played by matinee idol John Lloyd Cruz) dashes off like a knight in shining armor and saves him in the nick of time.
As they roll on the ground, Rey Valera’s lachrymose song, “Kung Kailangan Mo Ako” wafts in the air.
Reminiscent of a scene in a Hollywood oldie, “Love Is A Many Splendored Thing,” the guy whose life was almost snapped by the speeding car wrenchingly, say: “You save my life!” - all in over-the-top dramatic tone.
Well, what happens next? The gang hovers around them and chorusly breaks into: “Pare, sobrang cheesy, n’yo ha!” Bingo, it’s time for Greenwich Extreme pizza.
In another series, basketball heartthrob Chris Tiu scores the winning basket in a hotly contested game. As pandemonium breaks loose and rain of confetti pours in, an overly excited player lifts Chris heroically.
The two whoop it up, their teammates watching with glee. As in previous ad, the gang breaks the “mushy moment” yelling, “Pare sobrang cheesy n’yo ha!”
At Burnham Park, John Lloyd Cruz tells a nervous Bea Lucero that he is “ending their friendship.” Before Bea could break into tears, John makes his tour de force acting: “This is the start of our romantic relationship” to the latter’s delight.
All star-studded, all celebrity-filled series, were they all expensive?
The agency doesn’t want to divulge but all Sherrie Chua, Account Director for Greenwich business could say was she’s all praises for client’s negotiating skills.
“We got the celebrities we wanted and recommended, we researched, we planned, we tested, so all’s well,” she beams with delight.
Since then, the line “sobrang cheesy” has made its way to people’s expressions, in a television gag and spoof show, even movies.
The campaign was also very prominent on the globally popular American Idol show, hitting the target right where it matters – bullseye, and for a media placement that could run into millions.
To extend the theme’s campaignability, the team also created “cheesy moments” in televised basketball leagues, adding buzz to its campaign.
What inspires a whole team that works just like hanging out as one big barkada?
Copywriter Martin Sarmenta is itching to pen another ‘cheesy’ storyline for Greenwich. “The brand keeps getting better and better and is an inspiration by itself because it gives me freedom to my ideas,” he says.
If people find Greenwich commercials funny, it could be because the Art Director on the team, RJ Ferrer derives his inspiration from Thai commercials – known all over the awards world for being hilarious.
For inspiration, Head of Visibility Jess Villaruel doesn’t need to look elsewhere. “Everyone is my inspiration, all the people around me,” he says.
The ever supportive and doting Account Director Sherrie Chua, says: “My team inspires me. “Where else will you find a wacky bunch that with a good first-pass batting average with client?”
Sharp and marketing savvy Planning Director CJ Jimenez believes in collaborative work. “That’s the way to go to synergize our thoughts and really gel together.”
Jimenez, a first-rate frontliner who has a deep creative background tucked under his belt knows what he’s talking about. His first and foremost concern is to come up with an inspiring brief to his creative buddies.
A month after launching the campaign, Greenwich Pizza sales increased by 26.48% and total pizza sales increased by 17.82%.
Compared to year ago sales, the brand’s pizza sales increased by 8.84% and total pizza sales increased by 9.70%.
All told, Publicis-Jimenez won slabs of awards for its “cheesy” campaign, including an “Araw” Gold for Best Integrated advertising in 2009 Philippine Ad Congress.
The only QSR with 230-strong outlets nationwide won the highest honor, topping all other major campaigns across different industries, not to mention a Tambuli and other marketing effectiveness awards.
Sweet success. Say cheese to Publicis-Jimenez.
Credits: ECD: Don Sevilla; CD: Noel San Juan, Lec Flores; Art Director: Jess Villaruel, RJ Ferrer
Copywriter: Noel San Juan, Martin Sarmenta
Planning Director: CJ Jimenez; Group Account Director: Chinky Veloso; Account Director: Sherie Chua; Producer: Noel Enriquez; Production House: Film Pabrika; Director: Carlo Directo
Posted by Roger Pe at 8:32 PM