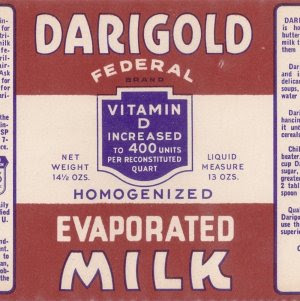 It was almost synonymous to bouncy, healthy kids, made your lola’s summer “Halo-Halo” delightfully creamy, and turned her leche flan so delicious the whole family kept craving for more.

But as in some love stories, the whirlwind romance must end and lovers drift apart, never to see each other again.

Darigold would have become a generic name for milk, had it not pulled out of the country during martial law days. But that’s going ahead of the story.

Under Darigold Company Seattle subsidiary, Darigold produced the first canned evaporated milk in the country in 1957.

At the height of its popularity, Darigold bought a 30-minute segment (on tv and radio) and launched “Darigold Jamboree” to strengthen its presence in the Philippines.

The “Eat Bulaga” of the 60s (without the gyrating promo girls in the background) helped Darigold became a dominating market leader in the evap milk category.

In this show, “Darigold Jamboree” introduced the “lucky home partner” mechanics we always see today (send in your labels and you and the contestant win a prize if your label is picked).

“Darigold Jamboree” also set the stage for the debut of a Bicolana girl from Iriga, the bus station drinking water peddler who would soon become a superstar.

She bested older singers in the main competition bracket, winning the top prize once more.

On a roll, she won another, this time from Darigold’s archrival - Liberty Milk’s “The Big Show,” where she would later change her name to Nora Aunor.

Aunor later on joined “Tawag ng Tanghalan,” where she stood out on her first try, was defeated on the second, but unstoppable for 14 suspenseful weeks. The rest is history.

The brand first advertised in 1958 and would eventually square off with Liberty Milk for two decades.
Like reigning movie queens Susan Roces and Amalia Fuentes in that era, the competition was ominous for it led to another generation of movie star rivalry: Nora Aunor and Vilma Santos. But that’s an entirely different story.

Darigold is best remembered as a milk brand the whole nation fell in love with because of its creamy goodness.
It had aggressive marketing, wider media presence and fundamental basic fact: good product quality.

“Darigold was an example of a brand worth selling. You stock crates of them, you sold them easy,” said a big grocery owner who is now owner of a supermarket.

“Brand-wise, everything was going for Darigold,” he said.

Why did the brand evaporate from supermarket shelves, household kitchen refs and cupboards?

The same questions throngs of consumers asked when Darigold slowly began to fade away, until it totally vanished.

For 20 years, Darigold operated a processing and tin can plant in the Philippines.
As it was lording the evap category and close to upstaging Liberty in condensed milk segment, the local Darigold partners were locked in a bitter legal battle with its mother company.

After the courts handed down painful decisions for both, the brand vowed out of existence in the mid 70s.

Liberty Evap and Liberty Condensada were very popular during the 50s but tapered down in the last two decades after ownership of the brand changed hands.

For many years, pinoy families loved the goodness of Liberty Condensada, the better selling product variant. It said “Ang paborito ng pamilya”, throughout its advertising campaign. Thematically, Liberty had a bouncy jingle with a woman singing the brand name repetitively, the predictable genre during that time.

A most recent supermarket store check however, proved futile - the brand can’t be found. Storeowners say it doesn’t exist anymore.

On its website, Alaska mentions Liberty and Alpine as its strong regional brands, particularly in Visayas and Mindanao.
Alpine is a made from whole cow's milk with “The Creamier Evap” market positioning.

With the coming of more magazines targeting women and housewives, like Women’s and Woman’s, these milk brands cranked up the heat and advertised heavily, in full page, full color almost all-year round.

Pancho Pantera Choco was another favorite that totally disappeared, a powder brand marketed in the Philippines during the 1960s. PPC was manufactured in the U.S. but distributed locally by Garrick Enterprises, Philippines Inc.
Posted by Roger Pe at 5:26 PM