MACABENTA'S "HOW TO MAKE A BENTA" 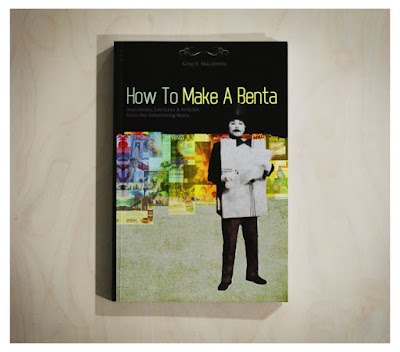 Advertising and Media in Hollywood movies? Yes, and why not? There are plenty.

“The Easiest Way” (1931) was the earliest film made with advertising as theme.

In the 1976 movie “Network”, Faye Dunaway won the Best Actress Oscar for her explosive portrayal of a ratings-obsessed producer. The top-grossing movie told abuses inside television networks.

Surely you must have heard of “Mad Men”, the long-running tv drama about “madvertising” people, highly acclaimed for its truthful delineation of real characters that inhabit the world of advertising.

The Emmy and Golden Globe award-winning series is about an intricate web of manipulation woven by men and women who prowl inside the walls of a prestigious ad agency in Madison Avenue, the famous street in New York.

Admen anywhere in the world can easily spot themselves in the series, thanks to its author Matthew Weiner, who also created a very apt title.

When 20 ad agencies sprouted in that part of the Big Apple in 1861, Madison became synonymous to the American advertising industry.

A number of these ad agencies went on to become big multinational brands. With Madison as a glamorous address their value increased and the street became the hub of American 4A’s.

Across the Pacific and after the war, a street in Malate, Manila was beginning to resemble like Madison.

Vito Cruz played host to a number of local ad agencies that were brands by themselves owing to the number of important clients they do business with.

Grant Advertising was the queen on that street, handling most, if not all Colgate-Palmolive products and other top accounts like Kodak, Ajinomoto and Philippine Plaza Hotel (now Sofitel).

The agency eventually became Bates-Alcantara, rebranded as Dentsu, Young & Rubicam, and finally repackaged as Y&R when the Alcantaras sold out to the former.

Just three houses away was the Tony Cantero-owned The Group, another dynamic agency, which honed many outstanding creative people in the years to come.

Toward Roxas, Philprom, owned by industry pioneer Pete Teodoro, lorded it over and was considered one of the top shops in terms of billings.

Admakers occupied a heritage house just off Vito Cruz until it transferred to Balete Drive in Quezon City.

QSV (Quiambao, Soriano and de Venecia, yes, the former Speaker of the House) located just across Rizal Memorial Coliseum was aggressive and had the budget-rich Philippine Charity Sweepstakes Office business.

The Manila Hotel lobby was the place to be seen and rub elbows with admen. “It was the equivalent of today’s watering holes at Shangrila and Manila Pen where businessmen held luncheon meetings, sipped coffee, and acted important,” recalled Macabenta.

Ace Advertising, before it became Ace Compton was in chic Escolta.

Macabenta’s memoirs of the Madisonization of Manila, details his personal anecdotes, lectures, and articles from real Filipino advertising battlegrounds, unlike most ad books we know that use foreign case studies.

Making a word pun on his “Macabenta” name which literally means “to make a sale”, the writer, jingle-maker, radio and tv producer, cartoonist, account executive, creative director, patriot, former Philippine 4A’s president, Ad Congress chair and CEO of AMA, gives us a style with a large dose of humor, solid with “insights drawn from campaigns that are considered classics in Philippine advertising.”

Greg Garcia III, former chair and ECD of Leo Burnett Manila, describes it as “the definitive book on Philippine advertising as seen and lived by Greg.”

Macabenta also gives tribute to the almost forgotten drillmaster, one of the country’s legends in advertising and founding chairman of Asian Federation of Advertising Association (AFAA), Antonio de Joya.

He rebukes younger colleagues in the industry with no sense of history, calling it “such an irony”.

For those who were not born yet when de Joya spearheaded the country in the Philippines and Asian advertising zenith, de Joya set up Ace Advertising, forerunner of Ace-Saatchi.

De Joya was also a brilliant copywriter who penned a Philippine copywriting classic, “a little can buy a lot” for Sta. Mesa Heights, one of the earliest upscale subdivisions in greater Manila.

In his book, Macabenta walks down in history and remembers when Filipro needed a hardworking PR group.
He recalls how Filipro hired AMA to handle sensitive government lobbying. The relationship paved way for the entry of Swiss-company Nestle in the Philippines and thus began one of the longest and most envied Manila client-agency relationships in marketing.

Macabenta consummates the entire golden era of AMA in one engaging book, including the launching of “One World of Nescafe” and “Great Cities of the World” campaigns where he partnered with Nestle’s marketing honcho Levi Castillo.

The book described it as “undoubtedly, the most successful ever mounted for a coffee brand in the Philippines.”
Macabenta details how Milo toppled a seemingly unstoppable market leader Ovaltine and how AMA became a round-the-clock “Milo Olympic Energy” ad agency.

“How To Make A Benta” includes hard-to-find dissertations and best practices documents - all very Pinoy case studies, step-by-step teachings in advertising, especially the hard way - when computers and digital age were zilch and all the agency had were Pinoy guts, ingenuity, hardwork and nothing more.

Full of punchlines and replete with witticisms in most of the paragraphs of the entire book, Macabenta takes us to a joyful, poignant, revealing, absorbing reading.

His commentary on the Filipino diaspora is one such. Every Filipino who has left his country to look for the proverbial American dream should read it.

The book also chronicles the setting up of AMA USA after the assassination of Ninoy Aquino brought uncertainties in the mid-80s and clients eased down on spending.

When it did, Joselito de Joya, Antonio de Joya’s eldest son, planted the seeds in America together with his wife Julie. The two “literally had to be a Task Force Total Approach”.

When the elder de Joya died, Lito came back to the Philippines to head the agency. He and Macabenta switched roles. The latter retired and manned the US operations.

To keep its Nestle business, AMA partnered with Publicis, the globally aligned Nestle agency based in Paris. But as in the intricate and mind-boggling “Mad Men” drama, the partnership would not last long.
Posted by Roger Pe at 6:56 AM