WHAT HAPPENED TO FAVORITE CANDIES OF THE PAST? 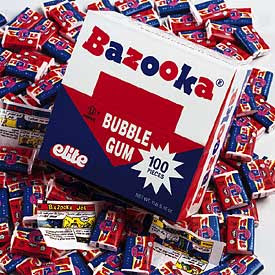 Who could forget Storck, called the Philippines’ ultimate menthol candy, staple of cigarette smokers on the streets?

People who smoke loved its cool, throat mentholating sensation. It was like a mouthwash in candy form, hugely popular, found and sold everywhere.

You see this candy in bowls during corporate boardroom meetings. You see it in group discussions, get-togethers or simple gatherings.

Storck Menthol Candy’s distribution is an excellent case study. The critical mass that it has built from lean years to heyday was nothing short of massive.

You see them sold across all channels - from wholesalers to retailers down to ambulant peddlers. It was even exported to the US mainland.

In busy areas, it was a phenomenon why ambulant vendors didn’t want to carry other candy brands other than Storck, proof of its wild popularity and acceptance.

On the street, in concerts, moviehouse snack kiosks, parks, school and office canteens, Storck was there.

In bright green twist wrapper, Storck was following you like your own shadow so much so that it overshadowed its nearest competition by a distant mile.

In August 1996, Los Angeles Times published an article and to quote:

“Consumers were warned not to eat a menthol candy imported from the Philippines, after tests showed that the wrappers contain dangerously high levels of lead, according to officials of U.S. Drug Administration.

Sadly for Storck, the item was very damaging.

Republic Biscuit Corporation (Rebisco), owned by businessman Jacinto Ng, bought 60% of Storck Products Incorporated, maker of the candy, for an undisclosed amount and took control over the company licensed to produce it locally.

In the ensuing story, Storck would stage a comeback and reborne as Starr, its new name with conspicuously almost identical packaging.

If Storck was the king of menthol candies, White Rabbit was the queen of toffy version.
The sweet, chewable, nougat candy was also a favorite among kids, teens and adults.

“White Rabbit was my comfort candy, said a neighbor. “It was my sweet bird of youth, “ said a successful doctor. A former athlete with a sweet tooth said it was her ‘pampaalis ng suya” (brightens my day) after a hard day’s grinding training.

But just like Storck, White Rabbit was slapped by frightening warnings from Philippine Bureau of Food and Drugs Administration, (BFAD).

Wikipedia chronicled an incident in July 2007: “BFAD claimed that four imported foods made in China contained formalin and should be recalled.”

One of those listed was White Rabbit. The brand, however contested the findings saying: “counterfeit candies, known to exist in the Philippines, might have been the real culprits.”

White Rabbit exhausted all efforts to defend the brand after it presented an independent report by the Shanghai affiliate of the Swiss-based SGS Group - the world's largest inspection and testing company.

The document argued that samples of candy, “ready to be exported overseas,” contained no toxic substances.

Agri-Food and Veterinary Authority (AVA) of Singapore also supported the former’s findings, conducted tests on their own and found the candy safe for consumption.

On July 24, 2007, however, the local Philippine distributor of White Rabbit, Cheng Ban Yek & Company bowed to the BFAD recall order.

In 2009, White Rabbit was reincarnated as Golden Rabbit, returning to the market after undergoing a name change.

To avoid the market stigma stained by the White Rabbit name, Golden Rabbit candy used milk from Australia instead of China.

Meanwhile, Candyman Philippines, manufaturer of local White Rabbit candies, which were not as soft as those that were imported from China, said their candies were safe and free of formalin compared to its Chinese sibling.

The company even opened its factory doors to media to clarify reports about the BFAD pullout order.

The company also called on BFAD to be clear with its announcements because it severely affected its candy business.”

BAZOOKA
It was part and parcel of every kid’s growing up years during the 60s till the 80s.

Bazooka was a gum made by Topps, the company based in New York since 1953. It was available in Strawberry Shake, Cherry Berry, Watermelon Whirl and Grape Rage but was only sold as one-flavored gum in the country.

A bestseller among kids, it became all the more popular because of a comic strip found inside the wrapper whom many die-hard fans collected all.

The selling gimmick was a big hit, largely because of the comic strip’s main character hero – Bazooka Joe.

Bazooka’s success spawned a number of clones, among them Bolero and Big Boy Bubble. It would face a much tougher competition with the entry of Tarzan.

If you grew up in the mid 60s, this bubble gum can’t be missed.

And If Bazooka had comic strip for avid fans, this one had playing cards, featuring Tarzan and his exploits, all in 66 colors accompanying each set.

There are still avid collectors of Tarzan cards today and each set has become hot collectors’ items.

Tarzan was wrapped in multi-colored wrappers – purple, green, red, orange and other colors. They cost only 25 centavo each during that time.

The flavor was strong and lingered long before the gum had been chewed away from continuous puffing.

“Back in the mid 60's, my Dad use to surprise me with a roll he would pull from his pocket. Just the thought of those candies makes my jaw painful. All I could find was its photo from Ebay now. I'm guessing someone has a vintage roll left. They were individually wrapped sour candies wrapped in wax paper. They were perhaps my first introduction to "sour" kind of candies long before they became popular. I suspect they are now literally extinct,” he said.

Chivarly Pusit, known for its rubbery texture but sweet flavor
Pom-poms, available in a white box featuring balls of chocolate-covered caramel candy
Serg's, famous for its chocolatey goodness
Señorita candy balls, sugar-coated, the sweet and sour lemony goodness was unforgettable
Sugar Daddy, easy for chewing because of its caramel goodness
Butter Ball, everyone’s darling because of its rich butter flavor
Horlicks – Creamy, chocolatey oval shaped goodness
Milk Duds, Also a runaway favorite
Curly Tops, the chocolate teens love to gift their friends during Christmas
Caramel Candy, toffee-like goodness and kids’ favorite
Chocobot, a Choc Nut wanabe with a strange name that faded gently into the night and did not survive
Posted by Roger Pe at 5:16 PM