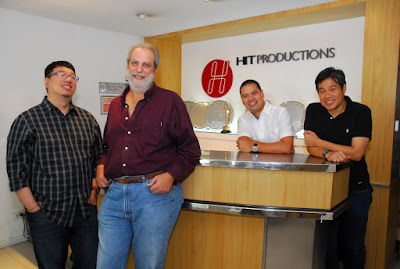 
A line in Simon and Garfunkel’s song, “The Sound of Silence” goes:

Sounds like an ad that’s not communicating and an audience that’s ignoring what it is saying.

Tired of seeing ads that just fire away and talking coldly? Try radio. The medium hits it right.

On radio, the announcer ‘talks but speaks’ directly to you, on a one-on-one basis.

“Crafted in the same manner, radio ads have the same effect and can be more engaging than any other medium,” says a media director.

Radio ads instantanteously get listeners’ attention because it’s emotion to emotion, talking to the audience personally.

“Without human emotion, not even the flashiest, latest technology in advertising, 3-D and all that jazz can connect to consumers,” a multi-awarded radio ad copywriter said.

Radio fills in the emotion where other mediums cannot.

Warm, not cold, intimate not detached, personal not otherwise, a medium with a heart - that is radio.

KBP (Kapisanan ng Mga Broadkaster sa Pilipinas) reports that radio reach in the Philippines is 98.5 percent of the population, one of the highest in Southeast Asia.

“Not only are many Filipinos tuning in to radio, they also spend much time listening — 17.7 hours per week,” it said.

Producing a simple 30-second radio commercial is just a drop in the bucket compared to what advertisers spend on a tv commercial.

“You can have it in the can from P50-P90K, fully recorded, edited and mixed using a single-voice talent,” a producer says.

And it costs just a fraction of tv ad to air a single spot – 5K to 7K on prime time of top-rating FM stations. The cost is even lower on AM stations.

As in all other ads, a radio ad begins with a script.

It can be a one-off (single campaign) or part of an integrated effort (full-blown advertising) based on a specific theme.

The usual ingredients of a great radio ad are: a creative script rich with witty lines delivered by great voice talents.

Oh, yes, you need a reliable sound studio that can deliver crisp, flawless mixing and editing to soar.

As everyone knows in the ad industry, Hit produced the Philippines’ first ever Cannes Gold Lion in radio (created by JWT Manila in 2007 for client Lotus Spa).

Business Friday: How is radio advertising now in digital age?

Vic Icasas: I think it’s undeniable that radio advertising in the Philippines isn’t what it used to be.

In the past year or two, we’ve noticed a definite downturn in the amount of radio spots being done at our studio.

I was also asked to help judge at last year’s Ad Congress and was taken aback not just by how many digital short films and viral ads were nominated but few radio campaigns showed up as finalists. Can’t be a coincidence.

BF: What can radio do that other communication channels cannot?

VI: Radio can be very specifically targeted at provinces and regions where a national tv campaign doesn’t quite do the trick.

We have a tie up with a major Philippine radio network that helps us find authentic local talents and record genuine dialect tracks that aren’t diluted by the big city.

Music driven radio ads, i.e. jingle and song-based campaigns, will always have a natural home on radio, and for a music-loving country like ours, I don’t see that going away anytime soon.

A creative radio script, executed properly, can still evoke images and situations that even a big-budget tv ad and the most sophisticated computer graphics cannot.
BF: Why is Hit a hit among many ad agencies, what’s your secret?

VI: We take great pride in the quality of of our service.

Working with ad agencies and producers is always a team effort.
They bring us their ideas, and we do our best to execute and craft them the way they envisioned or even come up with something totally new.

We pride ourselves on being not just a supplier but as collaborator.
A big part of the team is made up of passionate and creative people aged 20 to early 30s so we’re still attuned to the sound of the younger generation.

BF: How do you keep abreast with the growing demands of clients?

VI: My partners and I are constantly trying to reinvent our business model to adjust to the changes in the industry.

We were the first company to put both music composers and audio post studios under one roof, unheard of back then.

There was also a time that almost every bit of advertising music you’d hear came from synthesizers and computerized orchestras the agencies got tired of them.

So we hired a top American acoustician and built a great band-recording studio capable of recording everything.

From live horn sections to vocal groups to jazz quartets, with a real grand piano and upright bass to live ukelele, an ethnic percussion track, or a Christmas carol played on coffee mugs, Hit Productions has recorded them all.

Today, the award-winning audio production company has a 7.1.digital-cinema surround mix-room, with an adjoining Foley sound effects recording studio with a whole slew of props and toys.

Want to hear even the tiniest drop of water to its crispiest detail?

Hit has different kinds of floor surfaces that can capture that, a bathtub with a microphone – “all to take the quality of sound effects beyond the normal stuff that comes off from a CD library,” Icasas said.

In the last few months Hit has also done a couple of surround mixes for cinema and event projects, hitting big happy results.

With radio and tv commercial soundtrack recordings, Hit can’t really be a hit and miss. It’s sure thing.
Posted by Roger Pe at 3:59 PM