3D, GLASSES-FREE: FUTURE OF MERCHANDISING INDOORS IN THE PHILIPPINES 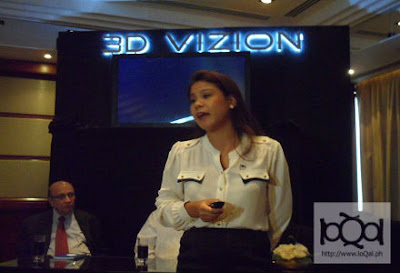 What were the greatest inventions in communications in the last 20 years?

The Internet, Facebook, Twitter, Celphones, iPads were just some of the life-changing gadgets and forms of media that had so much impact on our lives.

At last year’s Ad Congress in CamSur,
Digital 3-D advertising was the most spellbinding technology presented by industry movers.

3-D Vizion, a proudly Filipino-owned company told the public to put those pesky 3D glasses aside because you won’t be needing them anymore.

Yes, those retro-looking eyeglasses for 3D viewing, like what they really are, are now totally retro.

Ready to be blown away beyond your wildest dreams?

Sit back and relax as 3D Vizion takes you to the future of advertising.

A bottle of beer rising from the fountain of sparkling bubbles, ice cold and refreshing makes you want to have a sip.

A dolphin so gracefully dancing in the deep blue, mesmerizing, you want to take a dip.


A treasure trove of coins pouring out from a slot machine, stretch out both your hands, catch a handful - the 3D scene will make you want to grip.

Unbelievable? Incredible. You’ve got to see it to believe it.

”The medium itself is so novel that 99.9% of the world’s population have never seen such a screen,” says Katrina Bantug, President and CEO of 3D Vizion.

Glasses-Free Digital 3D advertising is bound to enthrall the audience.

The arrival of glasses-free 3D in the Philippines certainly opens a whole new era for the advertising industry, putting the country ahead of many first-world nations,” Bantug said

BUSINESS FRIDAY: What exactly is 3D and how does it work without the glasses?

KATRINA BANTUG: 3D is anything with a 3Dimensional form, usually popping out or stretching in from a surface.

Ever since the 1950's we've been viewing 3D using goofy glasses. Today, armed with the best scientific advancements, it is possible to see 3D without the glasses.

This is possible simply by, wrapping the glasses around the screen.

BF: There seems to be a resurgence of 3D everywhere, what has brought about this trend?

KB: The trend is brought about by James Cameron’s block buster film Avatar, since its release, 3D has suddenly become the hottest thing.

KB: This is most definitely not a fad.

The largest electronic manufacturers around the world have all joined the 3D bandwagon.

Samsung, LG, Panasonic, SONY have all come out with 3D gadgets from mobile phones, laptops, cameras and 3D screens that need the glasses.

There is an industry-wide multi-billion dollar push to develop the 3D market globally. This technology is here to stay.

3D electronics were ‘home-made’ by people perceived as “mad scientists”. No large electronic manufacturer espoused the medium. Today, it is changing the game.

BF: Can you describe the technology behind your 3D system?

Basically, it’s a combination of German, US, Korean and European technology, all rolled into one.

We believe it's time to change the way all of us see things. In this cluttered media landscape, it’s all about being remembered.

BF: How can the 3D system make brands rise above the clutter?

KB: Communications theorist Marshall Mcluhan once said: "the medium is the message". What would he say about Glasses Free 3D as platform?

Where the medium is so innovative that products literally leap out of the screen, consumers actually try to reach out and grab the product.

In a world where we are constantly bombarded by ads, 3D is the most entertaining and astonishing way to stand out.

At the first hint of an ad, people normally zap to eliminate, the radio station, the cable channels, commercials etc.

As stark contrast, people really go out of their way to see the glasses-free 3D.

They stop, look and linger at the system even to the point of calling friends to watch with them.

Studies also show people remember the messages for a much longer period of time if it is shown in 3D.

BF: How can all these translate into sales?

KB: Our proprietary technology provides companies with a revolutionary platform that they can use, not just to catch attention but ultimately, to generate sales and exceed sales targets through brand recall.

Multiple studies have also shown heightened engagement, yielding 92% in memory retention among audience, with 68% of said statistics displaying a higher probability of following the experience with a purchase.

Studies conducted in other industries, such as education also prove the effectiveness of the medium in making people perceive, understand and remember ideas.

3-D Vizion is backed by Demmikk Holdings Inc. represented by Ruben Tiu, and a company renowned for creating only the highest quality product and service offerings, such as Discovery Primea and Discovery Shores Boracay.
Posted by Roger Pe at 3:58 PM