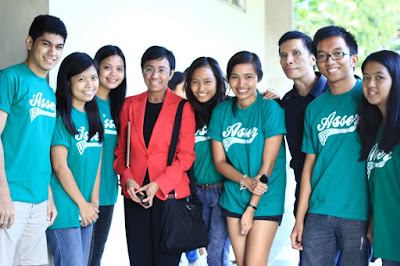 It is a communicator’s market. The opportunities are aplenty. Go for it.

Brighter if you got what it takes: love for the languages the world speaks, extraordinary knack for original creation, invention, discovery, an amazing personality and ability to express words entertainingly, written or verbally.

Brightest if your passion never dips below zero, a dose of luck is on your side, and it is written – you’re destined to make it.

The career talk symposium entitled “Track and Field” was launched by UP Broadcasting Association to celebrate its 43rd year of “Passion, Glory and Excellence.”

Through the college’s broadcast department, which has produced some of the country’s best and most illustrious names in media and advertising, the organization amplified the importance of conducting an event that would inform students of the countless opportunities available for them outside the academe.

“We wanted an event that will provide inspiration to our fellow students and help them decide the academic track that best suits their potentials,” said Irene Pavia, Marketing Officer of UPBA and Angela Garzon, Project Head.

Ressa, former Jakarta bureau chief of CNN and head of ABS-CBN’s news and current affairs unit, speaks about “The Courage To Do What Is Right.”

In a world where doing the wrong thing seems to be the only way to get ahead, Ressa told students: “You have to find the courage to say No.”

She quotes some powerful lines from Malcolm Gladwell’s The Tipping Point, how little things make a difference like drawing a line in the sand and not crossing it.

Ressa’s insightful lectures resonates across the auditorium: “The more you say no, the easier it becomes. The more you do the right thing, the harder it is to do the wrong thing.”

She takes a snipe at journalists who accept bribes and whose excuses are very familiar: “Everyone is doing it.” “I’d be stupid if I didn’t take it.” “The budget is there anyway.” “I don’t have to do what they want anyway.”

De los Reyes, who directed many gems of Philippine cinema like “Annie Batungbakal”, “High School Circa 65” “Bagets” “Gabun” and the internationally acclaimed “Magnifico”, advises students to go and chase for their dreams.

“Dreams are never impossible to reach. Just do what you need to do: focus and you’ll be closer to reaching them,” he said.

The veteran director whose film “Magnifico” many cineastes said could have done well in previous Oscar Best Foreign film competition, says: “Never beat around the bush, know what you want.”

“Magnifico” won many local awards, including a Best Director grandslam for the UP Masscom alumnus. Last year, noted film critics picked it as one of the countries’10 Best Films of the Decade.

In the international scene, “Magnifico” and De los Reyes brought honors to the Philippines. The film and its director won top prizes in Berlin, Hawaii and the Karlovy Vary (Czech Republic) international festivals.

For those who are leaning towards a career in advertising, this author reminded them not to be afraid of failures nor be bullied by them. “Fail the failure. Failure is just a word,” he said.

While it is cool, fun, glamorous to be in advertising, it requires a lot of hardwork, patience, flair, emotional investments, long hours and talent.

“If you don’t quit, it is satisfying, flattering and you may even get revered like rock stars as in Brazil,” he added.

The crowd was treated to a couple of entertaining tv commercials and print campaigns done by the author locally, as well as during his stint as expat in Indonesia, Malaysia, Vietnam and Cambodia.

Future generation of Filipino media men and advertising practitioners also got a glimpse of the advertising process and how it operates.

After the three spoke, a question-and-answer forum followed. A student stood up and asked: why do Filipinos go abroad to work and what can we learn from foreign commercials?

“Filipino talents are in-demand abroad. We learn from other cultures, they learn from us. As the whole world gets smaller and smaller because of media communications that’s gone totally digital, we need an amalgam of cultures to benchmark ourselves without losing our uniqueness.”

A former broadcaster, who now shares his vast knowledge gained from years of experience, makes an interesting insight:

“At the end of it all, we all learn that it is not important what degree we have.
Though most employees would be happy to ask for an English major for publications and broadcast media, it is the content that matters most,” he said.

Many successful Filipinos in communications did internships without pay or for a pitiful amount. They stuck, around until they got noticed and eventually rose to where they are now.

Are you a student who is seriously considering a career in communications? Take the following advice from Ressa:

“Be excellent at what you do. Be self-aware. Take responsibility for what you say and what you do. Find your allies. You’ll need help.”