WAITING FOR ANOTHER CANNES GOLD LION 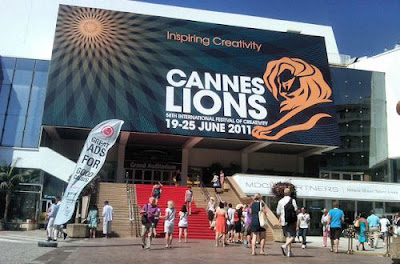 It is time to get Schengen visa once again and go Lion hunting, bonjour advertisers.

The Lions are roaring, who can’t resist the call of the ‘wild’ in Cannes?

June is the time of the year when creative people, and now, even junior marketers head towards south of France.

Each year, more than 9,000 people in the global creative communications business come together for a rendezvous in Palais des Festivals along postcard pretty La Croisette.

What was once a creative domain is now a merry-mix of clients, production house directors, PR and media practitioners, trade magazine publishers, special effects animators, print production specialists, CEOs, and this year, a Hollywood box-office film director and a former US President.

The event: Cannes Lions, the world’s biggest advertising festival for which the Philippine Daily Inquirer is the country’s official representative.

Undoubtedly, it is also the most expensive.

Flying to Europe from Manila costs almost the same as one film entry and that doesn’t count your food and hotel expenses.

One euro is equivalent to 54 pesos, now go figure the amount you’ll cough out just to rub elbows with the world’s greatest ad creators

The Olympics of advertising is set to unfold this Sunday, June 17 to June 23 promising a full week of a wildly inspiring program.

The list focuses on the latest trends in advertising, insightful marketing case studies, new technology, techniques and innovations in creativity.

This year, the festival is introducing two new categories: Mobile and Branded Content Entertainment Lions – to celebrate the best creative work on mobile devices and those developed with a client's DNA at the core.

That’s the most irreverent, in-your face question many people asked when world recession hit us in 2009 and ad agencies went on a retrenchment-spree extending even up to this day.

“How can an ad be relevant if it had little impact or no impact at all on sales?”

“How can creative awards be relevant when you know that the ad we are talking about only ran once, and had no legit media plan long enough to be visible to the consumer market?” a very vocal creative director said matter-of-factly.

Here’s part of his script that’ll shock even the jaded award winners:

“When you get into a taxi and tell the driver that you're in advertising, they often ask you whether you've done anything they might be familiar with.

Well, have you? Ironically, the more awards you've been winning these days, the more likely the answer is "No."

“It's fast becoming clear that the majority of things we're rewarding, as an industry, are either small or marginal efforts for legitimate clients, things we made for real clients that the clients seem not to have ever heard of, or out-and-out fakes.

Some of these projects are well intentioned since, at the very least, they are meant to "inspire" us when we work on bigger, better-paying accounts.

But without getting into whether this kind of activity is immoral or just plain chickenshit, I'd like to point out a graver toll it's taking on us all: It's making our business less famous. Less fun. Less public. Less about any of the reasons you probably got into it in the first place.

We've created a system that rewards work that is increasingly unknown to anyone outside the business.

We have become connoisseurs of esoterica. And in the process, we're becoming more about us, and less about changing the world. We are becoming irrelevant award-chasers.”

Goodby went on to lambast “ghost” (scam ads) as a symptom of the malaise, saying there are big, obvious signs of this syndrome everywhere.
He challenged ad creators to think about the market: “Think about it the next time you get in a cab, think about it when you consider what will make you want to get up and go to work tomorrow.”
The debate continues to rage. Three years ago, Cannes organizers made drastic changes in entry submissions.

Clients must concur with what ad agencies submit and market outcome of the ad campaign must be substantiated by facts, making harder for those who may have intentions of circumventing the rules.

Inspite of harsh criticisms thrown at Cannes Lions there are still many who believe Cannes is the greatest thing that ever happened to the ad industry.

“Cannes is the start of many great things: an idea, friendship, connections, beneficial networking, even a career, “ said a blogger.

Some of the industry's leading figures like Sir John Hegarty, Marcello Serpa, Rei Inamoto, Lee Clowe, Bob Scarpelli and many more have inspiring stories to tell about Cannes.

The Philippines’ first big win in Cannes was a Silver Lion by BBDO-Guerrero in 2005. The Consuelo Foundation tv ad was made from a Ditsi Carolino documentary entitled “Bunso”. It made an emotional appeal to lawmakers to separate juveniles from adults in over-crowded jails.

Emily Abrera, chairman emeritus of McCann WorldGroup, sat on the jury panel during that year, the first Filipino ever to judge in Cannes.

Two years after, the Philippines joined the list of world countries having won Cannes Gold Lions in the festival’s almost 60-year history.

JWT Manila’s radio campaign for Lotus Spa surprised the big boys and brought home the country’s first ever Gold Lion. David Guerrero sat on the radio jury that year. The campaign went on to win more golds in the Asian circuit.

The competition challenged 17 teams of young in-house marketers from around the world to develop a product or service concept that is an extension of their own companies’ business and supports a charitable cause.

This year, Philippine ad agencies are submitting a total of 315 entries hoping to win more Lions and break its 2007 record.

A record 34,301 entries from 87 countries have been submitted, an overall increase of 19% against last year.

The largest category is the Press Lions, up by 12% to 6,056 entries. The new categories of Branded Content & Entertainment and Mobile attracted 800 and 965 entries each.