HOW INTEGRATED IS YOUR AD CAMPAIGN? 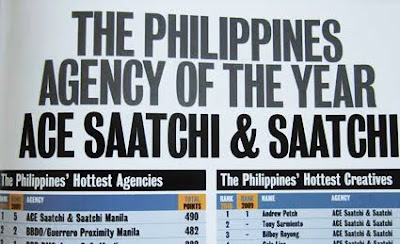 Over the last three years, Ace Saatchi and Saatchi has gifted the Philippines with Silver and Bronze Clios, a One Show Pencil, Cannes Silver and Bronze Lions, a number of Asia Adfest Lotus Gold and Silver awards and Campaign Brief Asia’s prestigious Agency of the Year title.

Can’t get enough? That’s just the tip of the iceberg.

But as far as Andrew Petch, Executive Creative Director of the agency is concerned, these glowing trove of awards pale in comparison to its latest achievement.

What titanium is all about.

Titanium is a shiny, white metallic element found in rocks and soil. Lightweight, strong, and highly resistant to corrosion, it is used as parts for aircraft, ships, watches, and among other things, for its durability.

Campaigns that fly or sail into the toughest winds of marketing environment are usually integrated and resistant to communication corrosion, thus, the category Titanium.

Cannes Titanium Lion is testament to the authenticity of a campaign, true-blue advertising created with a through-the-line master plan and a 360-degree vision for the brand.

The world's ultimate accolade in advertising, Titanium is the only category that judges work on the criteria of: “Does it pioneer brand communications for the future?” rather than just “Is it the best work of the past 12 months?”

“We don’t do one-off ads, we do integrated solutions for clients regardless of how small or big their brands are,” says Petch who admittedly, is a big fan of Filipino creative talents.

The agency’s “Tiger Energy Playground” was singled out in Cannes for stretching the campaign beyond the common idea of the word “energy.”

“We want to make people know that Tiger is not just an energy-giving snack biscuit but giving out energy in the real sense of the word,” Petch said.

The “Tiger Energy Playground” campaign is an inspiring example of innovation that uses technology to engage people emotionally in a way traditional advertising can never achieve.

“Seeing children having moments of joy and benefitting from Tiger Energy Playground Program is unexplainable,” said Petch who said that the Kraft project is now permanent for the orphanage.

Petch considers the Cannes Titanium achievement a landmark saying the country can lead the world in advertising, not just keeping abreast with what everybody is doing.

The creative maverick that kept stressing the phrase “engaging the consumers” has, without a doubt, officially turned around the agency from the doldrums.

Today, he is as relentless as ever making the agency the most consistent award-winner among the Top 3 agencies over a three-year period.

While other agencies go on a rollercoaster ride from fame to oblivion and one-off wins, Saatchi’s star remains as iridescent largely to Petch’s driving philosophy.

Petch always instills in everyone the Saatchi mantra: “One Team, One Dream.”
“When you’re in Saatchi, you must continuously be passionate to do great work,” he says with a piercing tone.

On motivating people, Petch flatly declares: “Creativity is the best weapon to build the company’s business and one’s career.”

He believes nothing is impossible, the same belief that he took by heart when he assumed the Ace Saatchi creative lead role three years ago.

"And that's been the guiding focus here at our place, in the world-class team we have created and the integrated process in which we work. We're an “ideas company” not an “ad agency”, he said.

The gungho belief has definitely given Ace Saatchi’s clients an unfair advantage over their competitors. It is now a towering agency in terms of building business and winning awards.

In Cannes this year, Saatchi entered two integrated campaigns: “Anna Banana” for PLDT myDSL and “Tiger Energy Playground” for Kraft, BBDO-Guerrero submitted 2: “It’s More Fun in the Philippines for DOT and “Bottle Lights” for Pepsi, and TBWA-SMP fielded a campaign for Boysen.

For Petch, there is something special about doing integrated campaigns.

A fully integrated campaign approach to marketing briefs can bring exceptional results and can actually save money he said.

With the continuing changes that are happening in the way marketers advertise to consumers, “Brands have to engage their consumers rather than just advertise to them,” Petch said.

“Brands must focus on many different streams of media for their campaigns – traditional, online, social, even experiential. The multiple touch-points (above the line, below the line, across the line, any which way around the line) will get them results,” he emphasized.

“Tiger Energy Playground” also made it to Cannes Direct, Outdoor, and Media shortlists.

Ace Saatchi and Saatchi’s “Anna Banana” campaign was a groundbreaking idea from the agency and a business success for its client PLDT MyDSL.

Prior to the campaign, awareness for PLDT myDSL had declined in the past 2 years since they stopped advertising in two of the country’s leading television networks.

The agency needed to tell the gatekeepers at home that PLDT myDSL’s strong Internet connections can lead to strong emotional moments yet still appear cool to their teenage kids.

The agency created a fictitious character, an ultra-supportive mother and a YouTube video featuring a son only a mother could love.

The results were phenomenal. The campaign resulted in almost 2 million combined views on You Tube.

It became the Top 2 most watched videos in the country on its first week. It trended on Twitter for two weeks, and with 667,990 eyeballs for user and celebrity tweets, it registered a 200% increase in applications for the brand.

On top of that, there was 30% increase in visits to its website, same increase in revenue and almost P2.1 million in earned media on above the line channels alone, including an estimated P10 million in free coverage online.

Last April, Ace Saatchi dominated the 2012 Creative Guild (the Philippine 4A’s award-giving body) “Kidlat” Awards with a whopping haul of 27 medals, the most by any ad agency, relegating BBDO-Guerrero to second place, an incredible ascension.

“With a world class team of people, original media ideas executed brilliantly for our biggest clients, we showed why Ace Saatchi & Saatchi is the Number 1 creative agency in the Philippines, and on our way to being the top in Asia-Pacific,” Petch said.

Proud of the relationship P&G and Ace Saatchi & Saatchi have built in the country, Petch said: “To win for our Fashion Laundry campaign for Ariel Washing Powder at the 2012 One Show Awards in New York, is great recognition for the agency and the talent of every one in our team that made it happen.”