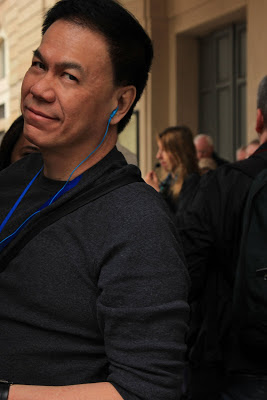 The advertising industry continues to change.

While some businesses were handed in shining silver platters before, that is wishful thinking today. You have to be invited and get accredited to get a client.

One observer says the industry is cannibalizing itself. “You’ll cringe under your seat if you find out what’s happening in the shadows,” he says. He is right, even the agency pantry girl is not clueless anymore.

“If we don’t protect the industry, no one will,” says Arnold Liong, Chairman and CEO of Draft FCB, one of the country’s stable ad agencies.

Draft FCB’s stability hinges largely because of the longevity of clients in its roster, and with Liong at the helm, you can be sure that it is going to be as solid as a rock.

Liong is one of the few remnants of ad agency protectors still actively involved in running the show even if many of his underlings have rose to become agency presidents, managing directors, shifted careers, semi-retired or thrown the towel completely.

He is still in his fighting element in the advertising ring, and to this day, hasn’t lost the punch championing equality and fair treatment of ad agencies in today’s scenario.

He’s one who’ll fight tooth-and-nail against copyright infringement, very vocal about patent bullies and is ready to deal with it to the very end.

“How I’d wish we have many Liong’s in the industry,” says a creative director whose personal and agency work have been ripped off, tweaked and used by idea vultures.

In an industry that has seen many so-called ad pitches that resulted in nothing and some unethical elements ended up mere idea fishing, Liong is heaven-sent.

“After a few weeks or months, you can be sure your ideas will reincarnate, filched and recycled by pirates,” Liong says without batting an eyelash.

Liong is wary about an industry that cannot go after idea copycats. “I’ve always told my ad agency people to protect our ideas, creativity and integrity,” he says.

“I wish we have a stronger body that’ll protect the very same industry we’ve built for many long years,“ Liong says with a firm tone.

Under international law, copyright protection is automatic. “We copyright our materials and make our stand known that we take copyright infringements seriously,” he adds.

Liong’s agency is also careful about running after new business pitches. Knowing where he’s coming from, you’ll understand. For Liong, growing the business from existing clients are sometimes much smarter to build than running after clients that have a track record of short-term relationships with agency partners.

“We don’t pitch,” Liong makes sense as he gives his advice: “You don’t decide on which agency to engage by merely looking at a pitch material. You judge an agency by the length of time it has handled a business. That’s the way to deal with it,” he points out.

There’s truth to what he is saying. Some ad agencies win accounts and lose them after a couple of years or even less. Not DraftFCB, for which Liong has managed for almost twelve years now.

The agency has a scintillating record of clients that have stuck with it for 10, 12 and over 15 years, in today’s environment where clients come and go.

What makes Liong’s DraftFCB tick? The agency has its own litmus test – The 6.5 Seconds That Matter”, a process that sticks together creativity and accountability to produce ideas that deliver a return, all within a short time frame.

“We don’t waste time but mind our business well and build clients’ business the way they envisioned it. We cement our relationships on solid grounds,” he tells Business Friday.

Those are his and his agency’s only formula, apart from believing in: “There’s strength in unity.”

Liong hates politics and believes one can tame the competition because “you stand to gain more by not isolating them,” he says.

He cites “costdiving” which undermines ad industry rates. He rues about the practice that is now prevailing and that may soon become a horrifying malaise.

“Why bring it down when you can demand? Why bring the cost so low when it will ultimately compromise standards and backfire on you?”

Not many advertising people know Draft FCB’s story dates back centuries ago. It opened as Lord & Thomas ad agency in Chicago in1873, and later became Foote, Cone, & Belding in 1942.

Just like McCannWorldwide, Draft FCB belongs to the Interpublic Group of companies, one of the largest ad agency networks in the world. In the Philippines, the agency partnered with Basic Advertising in mid-80s.

It became Draft FCB in 2006, and is also crowding the world’s big guns in Cannes, Clio, One Show, Echoes, El Ojo, Effies, and Caples.

“We had our humongous growth from 2000 to 2006 and we are excited and ready for another transition: e-commerce retail, digital publishing, and media syndication,” says Liong.

While some ad agencies pay lip service to being digital-savvy and flaunt it without walking the talk, Liong’s business acumen is showing: the last four mentioned above are fast taking in shape within the walls of DraftFCB, pushing the agency to the next level.

He is a certified tennis buff and plays so well the sport has taken him to the French, Australian and US Open tournaments as a fan of hardcore tennis. He targets Wimbledon next.

“Just like in tennis, good footwork is key to business building,” he says. “It’s a game of cash flow and staying relevant to consumers if you want to get an advantage and make budgets ploughed back to you,” he says.

Liong is not your typical laidback CEO. He is aggressive and describes himself as street-smart, even in the way he dresses up. “I don’t dress up for people, they dress up for me,” he wittingly says.

He already had a 5-year plan when he was in high school, calling it forward planning. He took up marketing because it was the fastest way to get into advertising.

He was a media person at JWT before he cut a fruitful career as one of Ace Compton’s (predecessor of Ace-Saatchi & Saatchi) most promising account executives.

Together with the iconic Emily Abrera, head of McCann-Erickson’s creative department then, he was part of the A-Team that re-engineered the agency.

In McCann, Liong and Abrera pitched for Johnson and Johnson’s Baby Powder. Abrera gamely sang the lyrics of the song during the presentation, and they won back the business.

They would also win the biggest brand pitch during that time: San Migue Pale Pilsen, their victory created an industry-wide tremor pushing the agency to the top of the billing rankings.

The Liong and Abrera tandem was formidable, unsinkable to say the very least. “During the heady days of the 80s to mid 90s, McCann was the template.

Every agency wanted to be like McCann,” says an ad agency president.

Liong moved to McCann Hongkong and then as GM of Prakit FCB Bangkok for three and a half years. He then rejuvenated Video Post as the number one production house in the country when he came back to the Philippines.

He then put up Scene Stealers, a tv production house with director Raul Jorolan in mid 90s, eventually becoming president of CPHG (Commercial Production Houses Group) which saw him protecting the interest of minimum wage earners.

Moving forward at Draft FCB, FCB Digital and Weber Shandwick, the agency PR and Events arm, Liong doesn’t want to be a tycoon with zillions of money.

“I am contented with what I have. Just to be able to enjoy my lifestyle and deliver good business results are enough for me,” he says.

“Our priority at Draft FCB is to sell our client’s products and do creative work that are relevant to consumers,” he reiterates.