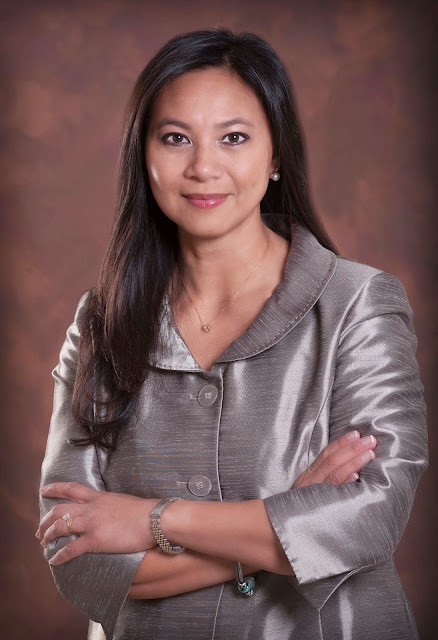 Her parents migrated to the U.S. because they realized that they would not be able to afford to send all of their eight kids to college if they had stayed and worked in the Philippines.

Looking back, Aurora Austriaco says, “I am sure this decision was very difficult for them. It took a lot of sacrifice for our parents to leave their kids with my aunts and grandparents so they can earn money and send back to us. My parents would come home every year and stay for one month so they can spend time with us. This went on for ten years until we ultimately got reunited in 1983.”

Today, reading Austriaco’s biodata is dizzying, you’ll get lost through a pile of accomplishments as tall as Chicago skyscrapers.

As an immigrant who chased a big dream and saw it fulfilled beyond her wildest imagination, her success story will surely inspire millions of Filipinos.

On June 21, 2012, Pinay morena-beauty Austriaco was installed as the 136th president of a prestigious American organization – the Chicago Bar Association and served until 2013. She was also named among “100 Influential Women in Chicago” by Today’s Chicago Woman Magazine prior.

Austriaco was 8 years old when her parents left the Philippines for the U.S. Her mom was a retired nurse, and together with her dad, eventually petitioned her older siblings one by one. Along with the last of her 2 other sisters, they headed off to the U.S. on August 21,1983.

Austriaco vividly remembers that date. On their way to the airport, news broke out that returning former Senator Benigno Aquino had been shot at the same airport. When she came to the U.S. at age 18, she had to start as a freshman all over again (none of her college units earned from first year of college in the Philippines was credited when she transferred to DePaul University). She took up an undergraduate course, majored in Finance and finished law.
Was it hard for a Pinoy, much more to a Filipino woman, to practice law in the US, given that it is a mainstream profession dominated by men? Austriaco says, “I don’t think so, particularly if you are a graduate of a U.S. law school.”

Austriaco says, there is a “character and fitness application process, a multi-state bar exam and then, the state bar exam. Once you pass all, you will be admitted to the Bar and be licensed to practice, a state by state criteria. It becomes harder to get a license if one is a foreign graduate or a graduate of a non-ABA-accredited law school.”
Eager to start her legal career, Austriaco hopped from part-time classes to full-time load sessions and managed to finish law school in three years. 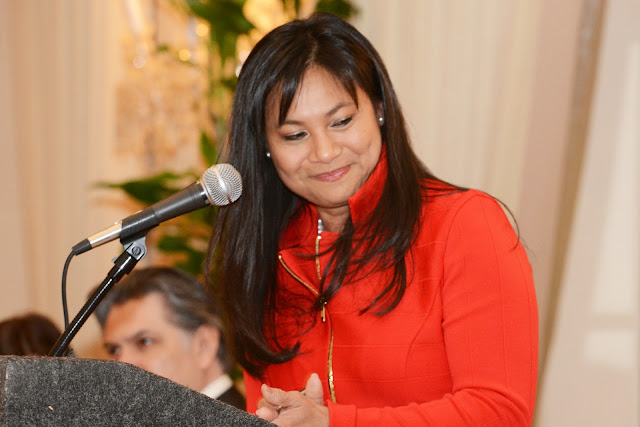 She began working in the accounting department of a law firm called “Attorneys’ Title” (where she worked while still in school). She returned as corporate counsel where she also served as one of the board directors.

After starting to have a family with her husband, Jerome, a Filipino dentist and business owner with a Doctorate of Dentistry from University of Illinois and MBA degree from University of Chicago), Austriaco wanted to get back to the courtroom. Though it was daunting for her, (she didn’t know where she would find clients), it turned quite the opposite, they came from everywhere, from her endless involvement in the legal community and local volunteer organizations.

Before forming her own firm (Austriaco and Associates) in 2009, Austriaco spent five years with a small boutique firm, worked for Harold Levine Ltd. for four years, and served as Corporate Counsel and Managing Attorney for the Indiana operations for Attorney's Title Guaranty Fund, Inc. for 10 years.

“I think it’s like the American dream, to have your own business”, Austriaco said. In her own office in a posh building in Chicago, Austriaco handles everything, from title insurance litigation to defense of mortgage foreclosure, a part of her business that makes her very much preoccupied.

Austriaco was formerly second vice-president of the Chicago Bar Association, helped organized the Filipino-American Bar Association in Illinois and spent much time reaching out to other bar associations. She was the first female minority president for the Illinois Real Estate Lawyers Association, served as president of the Asian American Institute, chaired the Cook County State’s Attorney Asian Advisory Council and sat on a variety of other local commissions and councils.

In one of several articles written about her in Illinois, U.S. District Chief Judge James Holderman described Austriaco as a “natural leader, a person who cares deeply about her community and profession.” Holderman appointed her as a merit selection panel for federal magistrate judges. 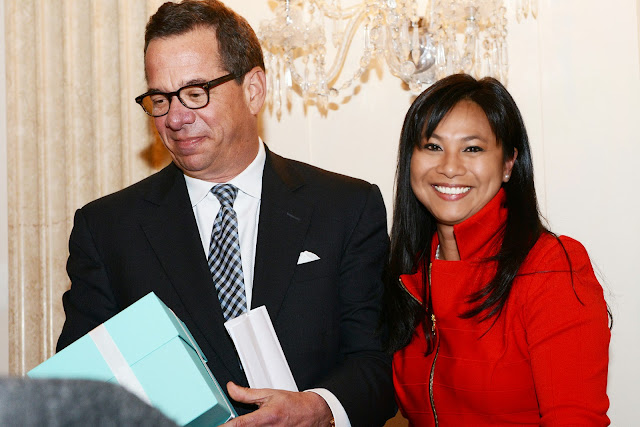 Born in the Philippines

On her 24th year as a practicing lawyer, Austriaco was born in Quezon City and went to grade school at Project 6 Elementary School. She went to Quezon City Science High School, spent one year in college at UST and graduated from DePaul University College of Law in 1990.
There were only a handful of Pinoy lawyers in the U.S. when she started her legal career. “Today, the number has risen which is really great to see,” she says.

She tells Global Pinoy that her greatest professional achievement in the US is the respect and confidence her peers have accorded her, specifically being elected as president of Chicago Bar Association, which is one of the oldest and largest metropolitan bar association in America with over 22,000 member lawyers.

Austriaco was likewise recognized as a Super Lawyer in Real Estate by the Super Lawyers publication for the past 3 years. Peers vote to be included in this elite group. The Leading Lawyers Network of Illinois also hailed her as Leading Lawyer for the past 5 years. The state also named her one of the Top 10 Women Consumer Lawyers and Top 50 Real Estate Lawyers, all of these she considers as her career highlights.

Austriaco never forgets her roots. In addition to her bar association involvement, she actively participates in civic projects of the Pinoy community in Chicago, which she describes as one of the largest and strongest Asian groups in the city comprised of many Filipino organizations. To help future generation of lawyers and give something back to the community, Austriaco supports networks for women and minorities. She mentors younger attorneys when she can, fulfilling a promise she made to one of her first mentors, real estate attorney Laurel Bellows who once said: “Austriaco isn’t just a role model for women and people of color, she’s an example for all lawyers.”

In 2006, she received the CBA Alliance for Women Alta Mae Hulett Award, a prestigious award given to women lawyers who have given significant contributions to the advancement of women in the legal profession. 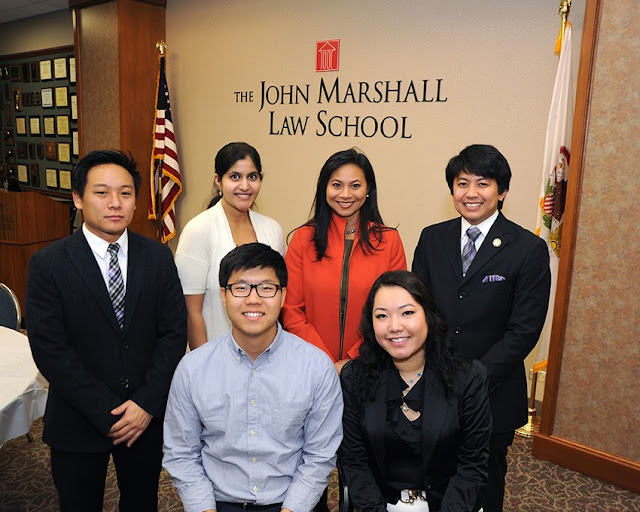 The Philippine Chamber of Commerce recognized her as one of the “Ten Most Outstanding Filipino American Businessmen” for 2009. Austriaco also served as 2010 Chair of the Asian-American Coalition Event hosted by the Filipino Community in January 2010 attended by over 1,300 people.

She was honored as one of the Top 100 Under 50 Diverse Executive Leaders in 2011 and was bestowed the Sister Margaret Taxler Award last year. Asked what advise she would give Filipinos to become successful in the US, especially in practicing law, Austriaco says: “Be yourself, be heard, be seen, work hard and give your 110% on any work you do. Embrace challenges, take risks and never give up,” she says.

Austriaco says while Americans love Filipinos for their loyalty, intelligence, warmth, talent, hardwork and dedication there are also challenges, which she herself also faced. “The Asian-American population in the U.S. accounts for approximately 6% of the entire population, the fastest-growing minority community. The Filipino community is a percentage within that 6%. But because the AA population is the smallest of all minority communities, we are not well represented in the C suites of corporate America or in the political field,” she says. We do not have the numbers Hispanics or African-Americans have so that our political strength and impact are not there to effectuate a strong voice.”

In 2008, the year Obama ran for President, Austriaco ran as State Representative, the first Filipina to run for the position in Illinois. “The more Filipinos run for office, the more our presence in the political silo will be recognized,” she says.

On her thoughts on the Filipino diaspora:

“You will find Filipinos in almost any part of the world, some parts more than the others and some Filipino communities stronger than the others. They work, earn money and send back to their families so they can have a better life, their kids can go to college and have good education. I think this is typical for most Filipinos in the U.S.”
She notices that in Chicago for instance, Filipinos are the largest customers of a money-remittance company. They consistently send money to their loved ones in the Philippines, thus helping the economy even though they are not in the Philippines.

Austriaco is proud of the many Filipinos she had met in many places in the U.S. and in other foreign countries. It’s always great to see fellow Filipinos, so whatever continent you are at, always be welcoming to a fellow Filipino. It’s a beautiful gesture,” she says.
Posted by Roger Pe at 6:25 PM