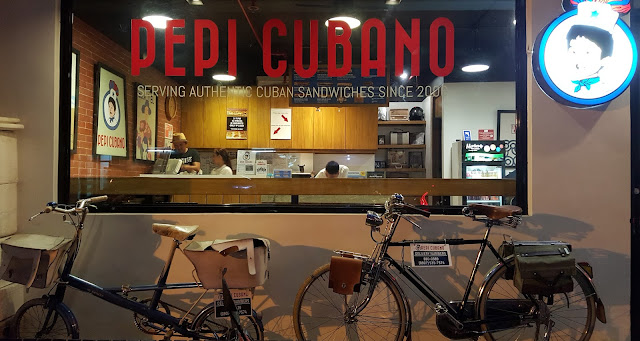 When her family returned to the Philippines from years of staying in Los Angeles, Susan Garcia-Dalmacion thought of bringing a little bit of Cuba to Manila. By being a food entrepreneur, she thought it would just be perfect. Afterall, her family loves food and with years of experience of being a chef herself, it’s something she would be happy doing.

The idea that popped up from her head became a reality, and soon, people were lining up infront of a quaint, little deli on Gallardo Street, Legaspi Village in Makati she and her happy family put up. Pepi Cubano, was born.

Pepi Cubano, who? Pepi Cubano is an inspiration from Dalmacion’s favorite Cuban sandwich. Immensely popular in LA, she always brought it home when she was in California. The business is named after her son Toti’s eldest son. “Because it carries her oldest grandson’s name, it goes without saying that the brand will always be protected. We also want the name to be always equated with positive vibes down to employees whom we want to feel they are part of our family who have as much stake in the business,” she says. 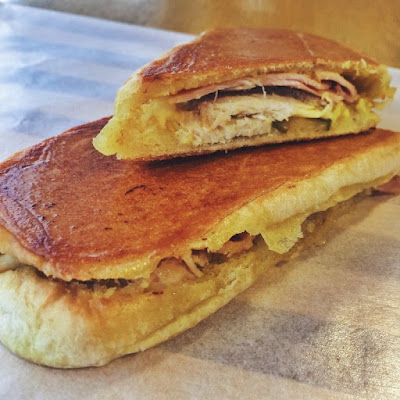 Temptingly special, scrumptious and crunchy as always, Pepi Cubano is an explosion of Caribbean ingredients prepared the Cuban way -, down to the last authentic detail. “The fillings are always lovingly laid out inside the bun. Perhaps, that’s what makes it so deliciously irresistible,” Dalmacion proudly intimates of the way she personally supervises preparation of her now famous sandwich.

A few months into the business, reviews by foodies are flattering. Write-ups have been favorable, unsolicited endorsements are aplenty, franchising requests as well as clamor for more branches around metro Manila are becoming persistent. If you google the word, you will see a flood of positive remarks heaped on Manila’s newest food sensation.

Pepi Cubano has upped Manila’s international ranking on the food barometer. People who always look for new and interesting joints in the nooks and crannies of the city could not be wrong.


The simple way to describe a Pepi Cubano sandwich is it is deliciously substantial. The way to enjoy it is when the bun is crunchy and hot while the fillings burst with meaty goodness and all the Caribbean flavors delight your senses. If the brand would be served and sold in Havana, Cubans would probably hardly notice any difference.

“Years of enjoying these sandwiches in L.A., combined with my experience in culinary art enabled me to come up with the recipe for the Cuban sandwiches we now serve,” Dalmacion proudly says.

The look, the shape, the taste, Pepi Cubano is a must-try for people who want fast but truly satisfying meal with a Cuban beat titillating you on the side. Pepi is an elongated bun filled with a generous amount of pork and ham, succulent enough to seduce the gods in heaven, as one customer said. With special cheese, pickles, jalapenos and mustard lavishly smothered on top, and with premium butter pressed hard to make it look flat, the gustatory experience will make you crave for more. 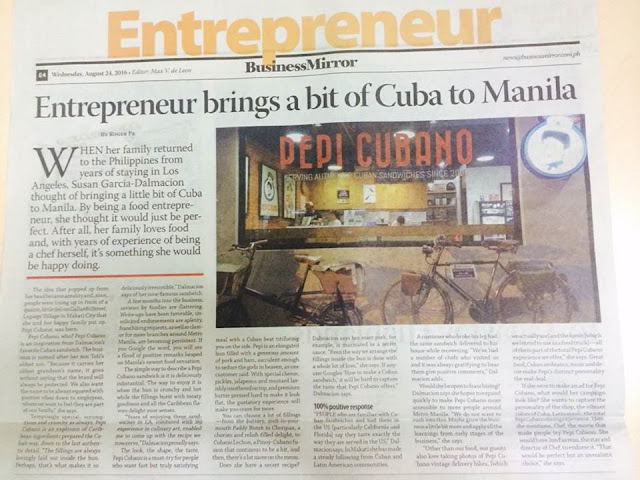 You can choose a lot of fillings – from the buttery, melt-in-your mouth Paddy Bistek to Choripan, a chorizo and relish filled delight to Cubano Lechon, a Pinoy-Cubano fusion that continous to be a hit, and then, there’s a lot more in the menu.

Starting the business at home

When Dalmacion started her own small business from her kitchen, friends immediately fell in love with her baby. They knew what to expect because she is a connoisseur of good food and her standards are high. Many buns and Cuban sandwiches later, the stage was set. She was ready to fly and the ball started rolling, eventually spreading like wildfire among her circle of friends. Friends of friends endorsed it until she had to put Little Cuba in Manila at the very heart of Makati’s business district. 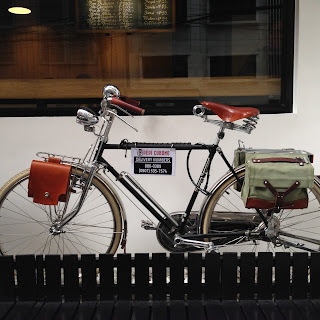 Lovers of Pepi Cubano admit Dalmacion’s sandwiches sold by themselves because they basically taste good. Dalmacion can reveal that she has perfected the recipe and use only the right ingredients. The warm welcome the product received was due to its consistent taste and quality - a priority in her kitchen that Dalmacion does not compromise.

Does she have a secret recipe? Dalmacion says her roast pork, for example, is marinated in a secret sauce. ”Even the way we arrange the fillings inside the bun is done with a whole lot of love. We treat it not as a fastfood but put our selves into our customers tastebuds, so what you get is a mouthwatering, deliciously prepared sandwich,” she says.

If anyone googles “How to make a Cuban sandwich”, it will be hard to capture the taste that Pepi Cubano offers, Dalmacion says. Why? It’s as unique as the name and the result of years of trying to perfect the recipe.

Dalmacion primarily targets office employees, entrepreneurs and condominium-dwellers - people who are always looking for a cozy place serving a quick but tasty meal. She wants to be able to put up with the demand and put more shops to cover key areas around Metro Manila in the next few years. She wants to continue what she has trailblazed and make Pepi Cubano accessible to even those who are too far away from her first branch in Makati.

What’s one thing that makes her smile? She is proud of the fact that from the time she opened her first shop, requests to put up a shop in the north, south, and other parts of Metro-Manila have not stopped.

Through the years, Dalmacion looks forward to seeing Pepi Cubano maintain its quality, to be known as a place with a warm welcoming atmosphere. She hopes to see her pet project become a favorite shop for people who love good food, with a presence not just in the metro but also in key cities all over the country, perhaps even the region.

“Pepi Cubano has been blessed to have gotten an almost perfect feedback from our customers. People who are familiar with Cuban sandwiches and had them in the US (particularly California and Florida) say they taste exactly the way they are served in the US,” Dalmacion says.

In Makati, she has made a steady following from Cuban and Latin American communities. Guests would come up to her and warmly tell her that her Cubano sandwiches reminded them of the taste they are so familiar with back home.

Then she mentions “Chef”, a movie that made many people try her Pepi Cubano. “We made good reviews because of that - on lifestyle websites, food blogs and magazines. They gave us exposure and kind words. Of course, I am also very thankful to people who endorsed us on social media,” she says.

Would she be open to franchising? Dalmacion says she hopes to expand quickly to make Pepi Cubano more accessible to more people around Metro-Manila. “But while we’ve had so many inquiries about franchising (even as far as Cebu), we do not want to rush into this. Maybe grow the business a little bit more and apply all the learnings from early stages of the business. So when we get into franchising, it will be a truly win-win situation for all. Five years from now, definitely more Pepi Cubano branches, I hope.”

Pepi Cubano is very active on social media. It has also made a conscious effort to be visible outside Makati by participating in food bazaars. Marketing tie-ups with Makati Diamond Residences, Uber, Bayani Brew, the fitness app K-Fit, among others are also helping spread awareness for Pepi. 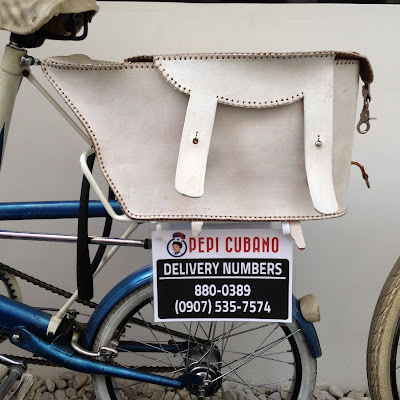 Dalmacion loves the fact that she has built a following over the last six months, people who enjoy Pepi Cubano practically everyday. It warms her heart knowing that they already have a favorite from her menu every time they visit.

A customer who broke his leg had the same sandwich delivered to his house while recovering. “We’ve had a number of chefs who visited us and it was always gratifying to hear them give positive comments. The common reaction was “like in that movie Chef,” Dalmacion says.

Dalmacion gets a different crowd on weekends. They are mostly families brought to her shop by working moms and dads. “We value them because they have helped much in spreading the word by posting enjoyment moments on social media. “Other than our food, our guests also love taking photos of Pepi Cubano vintage delivery bikes, (which we actually use) and the “kombi” (which we intend to use as a “food truck”) – all of them part of the total Pepi Cubano experience we offer,” she says. Great food, Cuban ambience, music and decor make Pepi’s distinct personality the real deal.

How is her business doing so far? Dalmacion says: “The one shop we have is doing well and we are expecting an even better performance at the end of the year. We have a number of marketing initiatives all lined-up. But given the number of players in the food business, especially in our area, we constantly think of creative ways to give our customers reason to choose us.”

If she were to make an ad for Pepi Cubano, what would her campaign look like?

“Based on our experience on social media, one gorgeous food shot can really bring in customers, our focus would still be on food, we will put in the sizzle, when the sandwiches are pressed, the crunch when you cut the sandwich, the mouth-watering layers that are revealed. But going beyond the food, we would want to capture the personality of the shop, the vibrant colors associated with Cuba, the Latin music that is always there, the total Pepi Cubano dining experience,” she excitedly tells us. 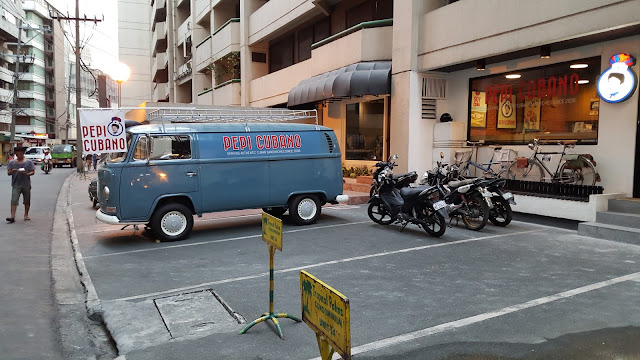 She would have Jon Favreau, the star and director of “Chef”* to endorse Pepi Cubano. “That would be perfect but an unrealistic choice,” she says.

*Chef is deliciously entertaining, comic as well as touching movie. Favreau contacted Roy Choi, a restaurateur who created the Kogi Korean Barbecue food truck to serve as a consultant on the film. He oversaw all of the menus prepared for the film and created the Cuban sandwiches that formed the central part of the movie.