ARE YOU A TOURISM AMBASSADOR OR A HECKLER?

Come join the growing number of citizens pushing the Philippine tourism bandwagon to the world. We are all in it together and when we really want something done, something happens. Change.

The latest change we heard this week was a breath of fresh air. After almost six years of being named one of the "worst airports," in the world, the Ninoy Aquino International Airport has finally lost its unpalatable tag.

The influential travel website “Guide To Sleeping in Airports” released its latest survey and showed that our main gateway is no longer on the list of Top 20 worst airports in the world, and Top 5 worst in Asia. 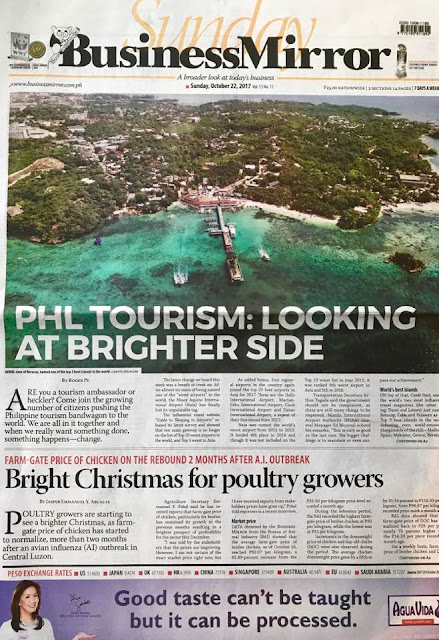 Transportation Secretary Arthur Tugade said, the government should not be complacent, as there are still many things to be improved. Manila International Airport Authority (MIAA) General Manager Ed Monreal echoed his remarks, “this is only as good as the last race. The bigger challenge is to maintain or even surpass our achievement."

On top of that, Conde Nast, one of the world’s two most influential travel magazines (the other being Travel And Leisure) just named Boracay, Cebu and Palawan as the Top 3 best islands in the world, defeating even world-renowned playgrounds of the rich - Mallorca, Spain; Mykonos, Greece; Bermuda, St. Barts; Turks and Caicos, Bali, Virgin and Cayman Islands, among others.

In 2016, Palawan was chosen by Conde Nast as the most beautiful island in the world, while Travel and Leisure Magazine, chose it as World’s Best Island three times in a row, 2015, 2016 and 2017. 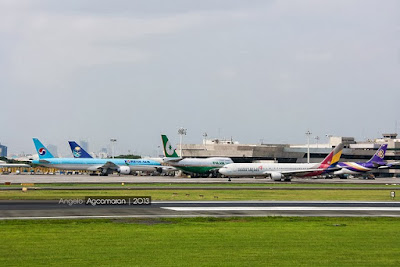 “It’s no wonder that Palawan ranked as the most beautiful island in the world. The clear aquamarine water, limestone cliffs, and lagoons of the island province of the Philippines are only some of its most basic highlights," said editor Cynthia Drescher.

"Palawan is home to nature reserves on both land and sea, with dolphins just offshore, marine gardens of giant clam, sea turtles nesting on white sand beaches, 600 species of butterflies, and lush palm forest like a Gilligan’s Island fever dream," she said.

In choosing Boracay as World’s Best Island for 2017, Conde Nast described Boracay as an “itty-bitty island (just under four square miles) in the Western Philippines that is as close to a tropical idyll as you’ll find in Southeast Asia, with gentle coastlines and spectacular sunsets. Fold in a thriving nightlife scene, and you have one of the top tourist spots in the region.”

It says of Cebu and Visayan islands: “Cebu is the most densely populated island in the Philippines, famous for its beaches on the mainland as well as across its surrounding islands. Not as wild as Phuket in Thailand, Cebu City is more personal, with plenty of up-and-coming restaurants and shopping.” 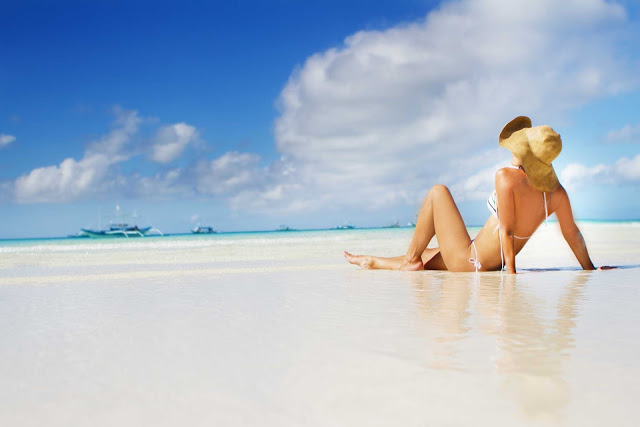 The influential travel magazine exalts Palawan as home to Puerto Princesa’s Underground River, one of Seven Natural Wonders of the World, with one of the longest underground river systems, traveling five miles through a subterranean cave. Karsts and other natural rock formations created by dissolving limestone, loom in every direction, which lovers of nature must see.

One of Asia’s best

Meanwhile, Pangulasian Island in El Nido also won Condé Nast Traveler Readers’ Choice Awards this year. Named one of Asia’s Top Resorts, it was also included in the magazine’s “Gold List 2017: Our Favorite Beach Resorts in the World”. Both prestigious categories were awarded to the resort for two consecutive years. 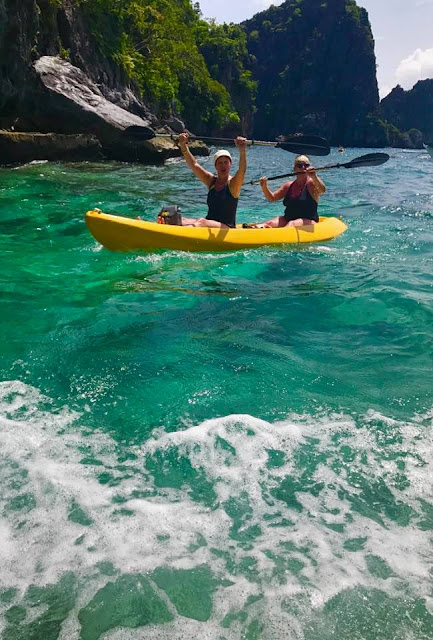 Over 300,000 travelers and dedicated readers took part in the annual Readers’ Choice Awards survey – submitting thousands of ratings to help create a list of winning favorites. The highly coveted list celebrates and recognizes the “Best in the World” and is also the longest-running recognition of excellence in the travel industry.

Pangulasian Island of El Nido Resorts, also known as the “Island of the Sun”, is right infront of a powdery white sand beach and unspoilt turquoise waters overlooking Bacuit Bay.

The resort offers 42 villas, all with a private balcony, boasting of breathtaking views of both sunrise and sunset. Guests across the globe choose to linger at the island’s floras and faunas, stroll along its 750 meters long beach and snorkel to encounter its mesmerizing underwater scenery and diverse marine life.

Amidst a fiesta celebration, the Department of Tourism relaunched “Bring Home a Friend to the Philippines”, aimed at raising inbound tourism figures and spur more economic activity in the country.

Introduced by Mina Gabor, former Tourism Secretary in 1994, the promotion hopes to receive positive reaction from the United States, Japan, Middle East and Hongkong. “These are the places where a lot of Filipino communities are. Eventually, we hope to spur more travel from other areas, DOT Secretary Wanda Teo said. 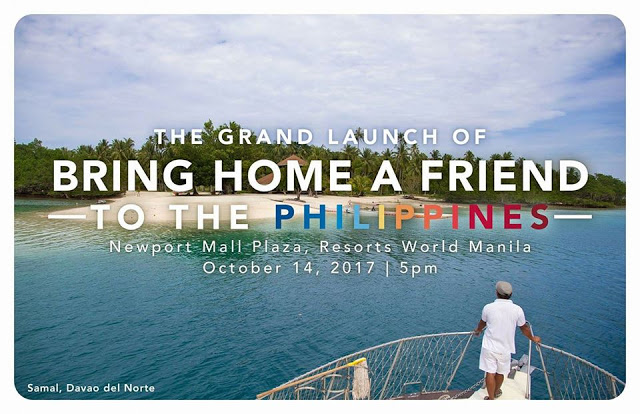 “Bring Home a Friend is our shout-out to the world to come and see the Philippines: a country of diverse cultures, rich traditions, and unrivaled biodiversity,” the Secretary added. Participating officers from different tourism industry associations, foreign diplomatic community, congress, support government agencies and media promised to give their all-out support to the program.

The promotion can win Filipinos an upscale condo from Megaworld, a brand new Toyota Vios or a P200,000 Duty Free shopping when they invite friends to visit the Philippines on their next vacation. A music video featuring movie matinee idol Piolo Pascual was especially created to create awareness for the program. 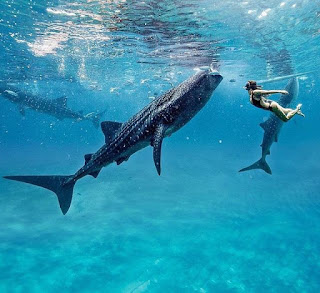 Tourism is poised to become the country’s top dollar-earning industry as Philippine lawmakers rallied behind Department of Tourism Secretary Wanda Teo to mount an “all-out promotion campaign,” as she disclosed yet another double-digit increase in international visitor arrivals for the first semester.

“Amidst setbacks and mounting challenges, tourist arrivals are way up. Beefing up the DOT’s war chest, at least restoring it to its previous level (P1B), would go a long way in boosting our branding campaign, expected to be at par with those of our Asian neighbors,” Teo stressed.
“In the face of challenges, the country continued to receive the growing influx of tourists from across the globe, desiring to see our world-class destinations and experience the renowned Filipino hospitality,” Teo said. During the congressional hearing, the DOT chief reiterated the agency’s commitment to a more competitive branding campaign as it sets higher targets for the coming year. 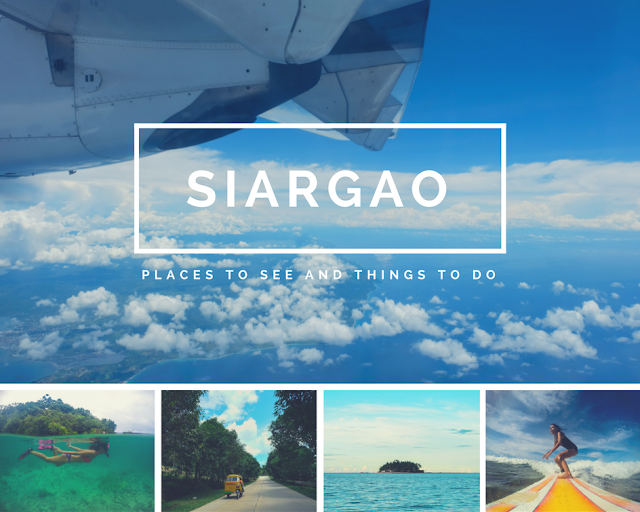 “We have to keep the momentum going now that we are in the implementation phase of the Tourism Development Plan for 2017-2022, which aims to unleash the potentials of our tourism industry and make it more competitive,” Teo said.

With a relentless push in promoting other undiscovered destinations, the Philippines is on the road to achieving its tourism arrival goals. As more infrastructure and development are realized, it is expected to pole vault from where it is now to the elite club of Asian tourism.

Baler and Siargao are now becoming surfing capitals of Asia. Bohol and the Bicol region continue to mesmerize. The beguiling islands of Romblon and Siquijor are now on the bucket list of new tourists. There are many more to explore in this archipelago of more than 7,100 beautiful islands. All you need is just pack your bags and book a ticket.
Posted by Roger Pe at 5:04 PM