AGENCY OF THE YEAR 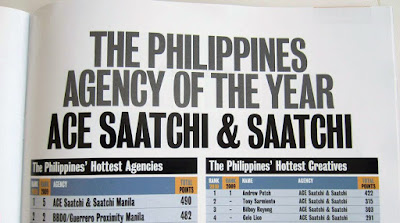 The world’s best creative minds chose Saatchi & Saatchi Manila as the Philippines’ Agency of the Year.

It is based on results from the world’s biggest, toughest and most prestigious award competitions.

The rankings honor the performances of 171 agencies, over 1500 copywriters and art directors that have sparkled in regional and international awards over the past two years.

When Petch came over to the Philippines to take over a largely abandoned creative ship, Petch just buckled down to work without much fanfare.

Today, his Saatchi Manila creative team, as well as the entire agency headed by Matt Seddon, has achieved something wilder beyond their imagination. The world is trumpeting his achievements.

Not only did he keep his Hottest Creative title, three other local Saatchi guys snared the next three juiciest spots, making it a formidable Saatchi show.

Two and a half years ago, Petch had a daunting task: shore up Saatchi & Saatchi Manila out of the doldrums and bring it up the creative ladder it once lopsidedly dominated for decades.

The long journey into night was like winter back home where he used to show his wares, at Saatchi London. He passionately mentored Filipino creatives and out of that nurturing, spring hovered around the imposing white Saatchi House along Pasong Tamo.

“It wasn’t just putting icing on the same cake. I created a new cake using the same ingredients: people with lots of motivation and inspiration,” he said.

2010 and 2011 turned out to be Saatchi’s brightest summers, exploding with awards one after the other. They were major ones and the boom began.

Last year, Saatchi won a Cannes Lion and was the country’s best performer in Clio, repeating the same feat this year.
In Asia Adfest last March, it was one of the five most awarded agencies in the festival, propelling Manila to its loftiest position ever, upstaging the usual suspects. The agency was on a roll after that.

A host of silver Clio statuettes for its Vespa “Our Ride” campaign followed, making it as the 15th most awarded print work in the world last year, according to the latest edition of the industry bible, The Gunn Report.

This is the Philippines’ highest ever ranking since it started in 1999, beating the previous record holder, JWT Manila’s “Trees” print ad for Greenpeace in 2006, which came 19th.

Vespa’s “Our Ride” (“Hug”) also won gold in London International Awards and Clio, as well as Asia Adfest’s Best of the Best in Print. D&AD rewarded it with a nomination.

With all results validated by Campaign Brief Asia, the agency catapulted to a resounding Philippine Agency of the Year.
Ranked zero in 2008, the agency amassed a total of 490 points in 2010 pole vaulting to Number 1 spot, enabling it to barge into the elite club of Top 20 Agencies in Asia (No. 18), the highest a Philippine agency ever achieved in its history.

The achievement reverberated as far as Saatchi headquarters in London, New York and more than 150 offices in 86 countries.

Who is Petch and how did he do it in such a short time? Our one-on-one interview:

What immediate reforms did you do to achieve that dream?

Petch: “I didn’t require anyone to do anything nor did I start poaching people from other hot shot local ad agencies.
I just told my team that they could be the best if they wanted to and I have certain standards.

All I did was do the basic: I wanted them to renew their love for creativity, fall in love with that word again and make them aware of the Saatchi & Saatchi mantra: Saatchi is the hotbed for world-changing ideas.
We surrounded walls with inspirational ideas, anything that could spark and trigger creativity.

What is your style, formula for success?

I lead by example. I am not a believer of “quick-fix” formula. I believe in compassionate mentoring. All I focused on was to get the job done.

I believe in the power of creativity, that big, original and impactful ideas can make a campaign with a goliath-like media budget, dead.

When I came on board Saatchi, I came only with this mindset: A healthy Saatchi is a healthy industry.

I am not a guy who would put pressure on anyone. The real pressure is: the world’s standards, whether everyone is measuring up to it or not.

I don’t believe in “star creative” or “star team”. I believe that everyone could be a star and the whole agency could shine like a luminous star.

What is your dream campaign?

It is one that is nationally loved by consumers and embraced by international award shows and my peers, something that moves a nation and creative people anywhere in the world.
Nothing beats the feeling of being recognized for a work that you’ve put a lot of heart to it.

How would you sell Filipino talents to the international market?

The world hasn’t really ‘discovered’ the Philippines and that’s sad. You are one of the world’s most beautiful countries.
I have been to places in your country many Filipinos haven’t even been to and I can say with conviction that the Philippines is Asia’s best-kept secret.

What is your biggest frustration, satisfaction?

Bad execution ruins a big idea. It turns to nothing if it’s poorly executed. Badly executed ideas are a huge waste of time and money.

Petch has gone a long way and has officially turned the agency around. He’s pushing it further to the top and isn’t resting on his laurels.

He counts not only awards but also blessings in the form of being able to change clients’ mindset. He wooed a marketing team, for example, using “the humble approach” and convinced it that the power of creativity can push market leadership even to greater heights.
Posted by Roger Pe at 10:09 PM