CONSUMERS ARE NOT ROBOTS, THEY ARE PEOPLE 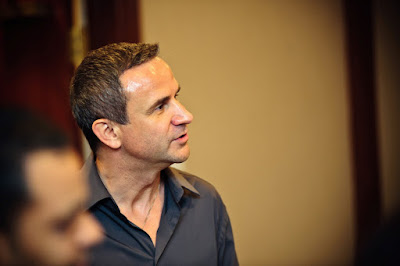 What else do you have? Your shoelace has a microchip that can record boardroom meetings. You live in your own world, so engrossed with that high-end computer you’ve become an unrecognizable geek.

How many hours have you logged in today? You’ve been ‘talking’ to your laptop since this morning, will you ever stop?
You craned your neck watching Transformer 3, that blockbuster movie. What has that transformed you, a robot?

Are new digital trends gobbling you up?

Are we on our way to becoming humanoids, doing things in a mechanical, repetitive way?

We are humans. We have hearts and minds. We have emotions. We are not machines. We are people.

Ziebinski, who’s as humanly warm and engaging as anyone could, talked about advertising amidst new digital trends, technology and a world filled with constantly changing technology inventions.

Why do you think Nike became people’s shoes, McDonald’s as people’s simple, easy, enjoyment place, and Canon as people’s camera?
Because these brands listened to people Ziebinski tells us. They dialogued, not monologued with people and listened to them.
Marketers lose brand ownership because they take people for granted. He also emphasized that people are powerful when it comes to buying decisions.

“People have their own minds, they think, they give feedback, they build communities. With a collective group of communities, especially on social media sites, they can be influential in choosing which brand to buy,” he says.

Regional presidents should learn a lot from Ziebinski’s style of unorthodox management. He is the unconventional king.

The former marketing director who conceptualized and made Poland’s best-selling multi-fruit drink brand, eventually engineered and steered 16 Leo Burnett agencies in Central and Eastern Europe as Agency of the Year for a long time running, 42 awesome times.

“I don’t believe in email management. I firmly believe in deep engagement with people around me, I go to them,” he says.

Young at the helm, very energetic as opposed to lethargic, Ziebinski doesn’t believe in implanting him in a headquarter office, cozying himself in a posh executive building and living the life of a highly privileged expat.

His headquarters are different Leo Burnett offices around Asia Pacific where he champions bold initiatives to optimize growth and resources of the network.

It’s giving payback, and how. In 2010, Leo Burnett Asia Pacific hit multi-dimensional and double-digit growth, Burnett’s highest in 6 years.
He introduced IPC (Internal Product Committee) replacing the role of a regional Executive Creative Director whom he says may not have extensive local knowledge of certain markets.

Leo Burnett Melbourne, for example, won a Cannes Grand Prix Lion for its "See The Person," campaign. In total, the Burnett Group walked away with 44 Cannes Lions at this year's festival.

Mark Tutssel, Global Chief Creative Officer of Leo Burnett Worldwide who will be a most special guest in the coming Philippine Advertising Congress in November, says, "Winning a coveted Grand Prix for Good and one of the first Gold Lions for Creative Effectiveness in Cannes is remarkable.”

Ziebinski’s target this year is to make Leo Burnett the fastest growing network in Asia Pacific.

Not far-fetched as all Leo Burnett countries, by the second quarter of the year, are already poised to achieve another double-digit banner year.
Leo Burnett Manila Managing Director Raymond Arrastia echoes the same optimism, saying: “We are determined to achieve sustainable growth across all channels, including digital and shopper marketing.

With these new additional marketing arms ready to service Burnett Manila’s roster of clients, Arrastia is excited to “deliver the right solutions to meet the requirements of engaging consumers.”

“We’re bringing the best talents as people are the center of everything we do in the agency: to get better and to remain on top,” he says.

Often asked how he got into the business, Ziebinski, like founder Leo Burnett, would always answer, “I didn't. The business got into me.”

A marketing person in the truest sense of the word, Ziebinski is very emphatic in saying, “we are not ad agencies anymore. We are marketing and brand communicators.”

Ziebinski is so right. In the constantly changing advertising landscape, an ad agency that pigeonholes itself as such is destined to be irrelevant. It must go with the flow, or even re-invent itself to achieve more.

The former chairman and CEO of Leo Burnett Central and Eastern Europe for almost a decade did just like that. Soon enough, he propelled the network to 13 Cannes Lions and 1,451 creative awards. He also helped push the Russian market to Top 10 from out of nowhere.

A member of Leo Burnett Global Leadership Council since 2006, Ziebinski is profuse with optimism when he talks. He is always inspirational, motivational and makes it a point to add value to his people.

Clients who are priorities to Ziebinski, no wonder he became CEO of Leo Burnett Poland (1996 to 2001), which eventuall ranked among the world’s most awarded agencies in 2001.

Ziebinski made significant contributions to the advancement of advertising in Central and Eastern Europe. The first president of Polish Advertising Agencies Association and founder of Polish Creative Directors Club and Effie Awards was also its first president.
Last year, he was named “Man of the Year by Poland’s ad industry and “AdMan of the Decade” by Poland’s Marketing Serwis magazine.