IS YOUR AD APPALLING, CLICHE AND NOT COMPETITIVE FOR AWARD SHOWS?


Call him Mr. Burger. Tag him as Mr. Telecom, or simply address him as Mr. Nice Guy, that fits as well.

When McDonald’s shifted creative duties from McCann to Leo Burnett because of global alignment, the same marketing team had no qualms in welcoming him back. 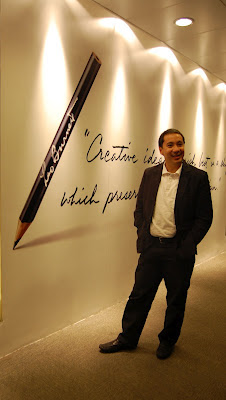 More than a decade of tender, loving management care earned him today a place in the sun, a position many of his batchmates only achieved halfway.

Meet Raymund Arrastia, Leo Burnett Manila’s Group Managing Director, the guy on top of an agency conclave voted by the Philippine 4A’s as Best in Business Management this year.

The closer they got, the closer the agency also became an award-winning machine. Remember Karen, the granddaughter whom his ‘lolo’ (grandfather) kept referring to as Gina in that landmark 2001 tv commercial?

That was not only a mass audience success, it shoved the Philippines to the elite circle of Gold winners in Spike Asia, one of Asia’s two category 1 award shows.

Before that, the country had languished in the cellar, seeing the yearly results gave local industry observers anguish. The “Lolo” win was a major coup. It finally broke the long lingering spell where the country had never before won in a mainstream medium.

Arrastia was part of that dawning of new triumphant era, that also saw BenGay, Pacific Internet, Tide, Perla and other ‘quiet’ Burnett brands rose one after the other in blaze of glory.

The GPC is an elite group of country creative directors tasked to evaluate ads prior to competing in award competitions. They are graded based on the following points:

At the end of screening, ads that garner 8 points or better are good enough to compete.

Has anyone handled three major telecom accounts in his career? If you look at Arrastia’s track record as agency partner in helping build strong brands, those were just appetizers.

In one of his agency forays, Arrastia was like a sword, cast in iron, sharpened by fire and faced different market oddities.

Arrastia gamely faced one tough-brand-to-crack and which everyone feared to handle because of long hours, mind-altering deadlines and a client who didn’t mince words.

“I took the challenge because it was character building and being on it was a test of character,” he smiles recollecting his saga in that tumult-fraught episode of his career.

As Assistant Vice President for Philippine operations of Colgate Center of Excellence at Young & Rubicam, Arrastia was already showing the tough brand builder he was turning into.

He was a steadfast steward of strategies at BBDO-Guerrero. As a Business Unit Director for Pepsi, he moved to greater challenges in a more progressive environment, his hands full, helping balance creativity with strong strategic weight.

“Understanding your local market, making sure that advertising connects to your target and doing your homework pay big time,” Arrastia says.

Marketers who do not have much budget to support a brand campaign could learn a lot from Arrastia.

“You don’t need a big tranche of money to get awareness. “Choose the right medium, he says.”

He cites “Twister Fries” - a new addition to McDonald’s potato cuisine, a proudly Philippine-made product concept that is on the verge of making it to mainstream and, perhaps, on global McDonald’s menu.

Arrastia is proud of Burnett’s digital advantage. “We are strong, we are competitive, we have the support, applications and technology created by our developers in-house unlike any other shops,” he stresses.

“You may call Leo Burnett Manila’s Arc Worldwide Digital as kind of a technological hub which even offshore clients run after,” he points out.

For Arrastia, the key to success is hiring the right people in the right places. That is perhaps the reason why the agency is going further the distance on the growth charts.

"Setting a new network record is a testament to our relentless focus on creativity and bringing to life ideas that resonate with a global audience."

Arrastia further tells us: “The network doesn’t believe in just creating ads. It has a creative mantra: "Acts Not Ads", a philosophy about a brand’s purpose, what it cares about and what it believes in. It is all about an act that can contribute to society at large or to a single life.”

A couple of years back, D&AD, the toughest awards show in the world, honored Leo Burnett Manila for its “Counting Sheep” tv ad for McDonald’s.

Last May 4, Leo Burnett Manila lorded it over the rest of field at the Creative Guild of the Philippines’ “Kidlat Awards” with 19 metals, 5 of them golds. The agency also won a World Bronze Medal at New York Festivals.

Jarek Ziebinski, president of Leo Burnett Asia Pacific, whom Business Friday also interviewed last year said: “Leo Burnett is poised to be the fastest growing network in the region amid a climate of anemic advertising budgets.”

Ziebinski is famous for his “growth for freedom” proponent: "If a managing director gives me growth in the market, he gets the freedom to hire, to raise salaries and to expand.”

With Arrastia’s brand management style, the stars can be reached and agency’s goals shouldn’t be far-fetched.