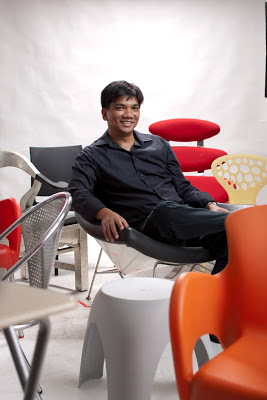 He loves to bring out the best in people.

He believes one can pick up something from everyone because everyone has an opinion.

He doesn’t like layers, his doors are always open, and most of all, he’s very collaborative.

What drives this unassuming man who always gives his 100% and wants to be the best that he can be?

In everything that he does, Miguel C. Ramos gives it his best shot, whether making a business pitch or simply trying to learn surfing with his kids during weekends.

From selling gasoline to being an accidental adman, Ramos, is reaping his rewards and is now in a bigger universe, not only as chairman of a creative ad agency but on top of a bigger realm of communications business. He, too, is chair of Aegis Media Group Philippines.

“We’ve integrated our key strengths. We are all one. Our consolidation will drive us to better returns because we don’t compete with each other unlike most media groups around,” he says.

Aegis came about when he and Lito ‘Boy’ Pangilinan, former Managing Director of MediaCom Philippines and General Manager of Campaigns & Grey, sat down for coffee one afternoon, a year ago to discuss possibilities.

“When I first heard the name Aegis, something totally different came to my mind. For those who are young (or mature enough) to remember, the name Aegis was first attributed to a pinoy rock band that started out as AGSoundtrippers.

They made waves in the late 90’s with some memorable hits like “Luha”, “Halik” and my personal favorite “Basang Basa Sa Ulan”, very descriptive song titles. I am sure many people in the industry will all agree,“ he reminisces.

Ramos’ Aegis was the result of his unrelenting search for excellence, looking for partners with the same commonality: intense desire to make their businesses grow.

With the changing advertising landscape, Ramos is never undaunted but describes it even as “never been this dynamic.”

The former 4A’s president who was very active in many industry-building efforts for many years also randomly tells Business Friday in an interview:

“Awards are still relevant as they are concrete measures of our effectivity.” He believes in relationship business, nurturing the partnership because at the end of the day, you get a better deal.
Getting to know Ramos’ newest baby is getting to know what makes Philippine media even more exciting, like the 5 global brands under its umbrella:
Carat is Aegis’ flagship and the world’s largest independent media communications company. It is present in 82 countries and employing 4,700 people.
Carat is redefining the media agency, not just offering media savings but delivering greater business value. Among its clients globally are General Motors Co, Diageo and Disney.
iProspect is a leading, global digital performance agency, focused on delivering digital performance on a global scale.
It helps many of the world's most successful brands maximize their online marketing ROI through paid search, social media strategy, search engine optimization, display media, conversion optimization, mobile marketing and other related services.
It has offices in 35 countries and employs 1,200 people, with major global clients, such as Procter & Gamble, HSBC and Sony.
Isobar is the world’s first global digital network and one of the largest. Its core competence is to connect brands by creating irresistible ideas that combine creative, planning, technology and data.
It was established in 2003 and has offices in 32 countries, with a staff of 2,400 people worldwide. Kellogg’s, Adidas and Nokia are some of its major clients.
Posterscope is the world’s leading Out-of-Home communications agency. Want to know how consumers behave when they are out-of-home? Talk to Posterscope and understand the connection between out-of-home, mobile and digital technologies.
Vizeum was created for the new era of media. It does not start with an ad, nor start with media. It starts from a different touch point – the way people make decisions about brands today.
It is present in 37 countries and employs 1,100 people worldwide with Coca-Cola, Panasonic and Total among its major clients.
THE NEW AGE: AEGIS

At the launching of Aegis, Ramos said: “traditional approaches are now obsolete and one hundred years of marketing ideas are gone.”

He said the old ways and tools don’t work as well as they used to now. He asked people to observe the following:

A 5-year old viewing a shampoo commercial of one of the largest and most sophisticated marketers in the world, a 4-year old niece navigating an Ipad intuitively and with greater skills than her 40-year old uncle.

A teenager connected simultaneously to three screens, TV, iPhone, Laptop on YM, while doing her homework”, and “a grandmother connecting to friends and relatives all over the world, creating and sharing content with ease.

“Observe all these, and you’ll know the world has changed,” he says.

Ramos’ Aegis puts media demographics and aperture expertly under the microscope. Aware that “brands and mass audiences now stand on equal footing,” marketers should rethink the way they should talk to consumers, he says.

He notes that crowd-power, the largest companies, even governments now know what’s happening to new media.

He cites being exposed 24/7 to multi-channels and conversations that spread at lightning speed, for example. “Marketers should all the more rethink the way they should talk to their targets,” he reiterates.

Ramos stresses the need for marketers to expand from traditional media.

“Where advertising is now a small part of a much wider and wilder media ecosystem, where the 30-second TV commercial may not always be the silver bullet as it has always been in the past, Aegis, he says, creates tremendous opportunities to engage and converse with audiences.”

To connect and engage the consumers unceasingly, Ramos offers the Aegis Solution. He recommends the following:

1. Start with zero based planning principles with no defined media executions to start from.

3. Leverage the strategic tools and consumer insights on hand that are most apt for multiple brands and audiences.

4. Provide accountability for marketing investments and the results delivered by these resources.

“More than ever before, clients now want more accountability. The more we are accountable, the more we become better,” Ramos says.

Media used to be just numbers but Ramos says: “Media is now about putting creativity is many consumer touch points.”

He says Aegis Media was built for this perfect storm of globalization, convergence and digitization of the country’s online and offline lives.

Ramos says the agency is fully armed, having put in place the best possible tools for strategic media planning, buying and mounted what is currently the Philippines’ most comprehensive consumer insight research study and planning tool, CSS (Consumer Connection System).

The other key members of the Aegis Media Philippines team: