TOUGH GIRL IN THE BIG APPLE 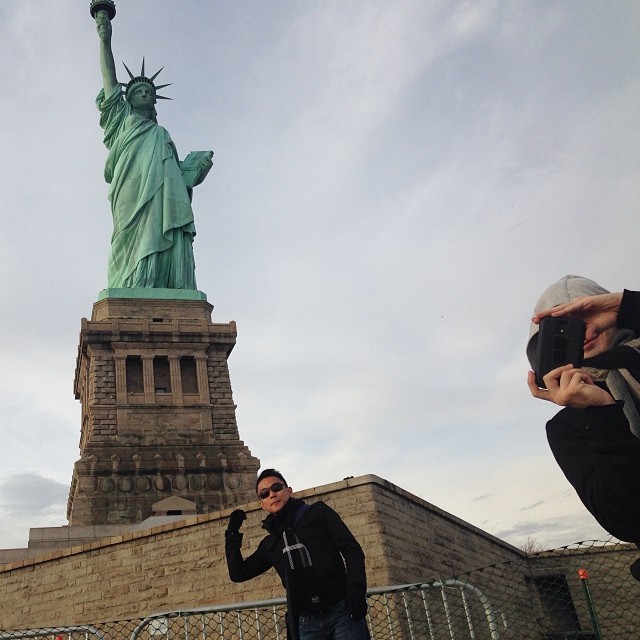 Sport has taken Sheena Atilano to places she has never imagined and today, faces the greatest challenge of her independent life. Can she survive New York?

She has been in the city that never sleeps for over a year now and looks ready to conquer it, like the way she conquered her fears when she faced her first hurdle in track and field.

Before she became a star in Philippine Athletics, Atilano was a winnow and sports officials never took her seriously. She had to constantly prove herself and worked doubly hard. After participating in local meets and achieved a measure of success, fame did not automatically come easy. She lurked in the shadow of Elma Muros-Posadas, former queen of Philippine hurdling.

For many years, she played second fiddle to Posadas - until a prestigious Asia-wide competition catapulted her to fame. In the 2007 Asian Athletics Grand Prix (patterned after the International Amateur Athletics Federation Diamond League) held in Pune, India, only Asia’s elite athletes were invited to participate. Officials of the national contingent did not expect her to figure prominently in the 100-meter hurdles but she surprised everyone, including herself.

She chased two highly rated and long-striding Kazakhstan athletes right at the gunstart, stuck with them to the finish and registered a personal best at the finish line. Her gritty effort gave her a podium finish much to the astonishment of punters back home. The icing on the cake: she broke Posadas’ 16-year old national record with a time of 13.65 seconds. That still stands today and probably will remain for another fifteen years.

Posadas’ record was not supposed to be broken, more so by someone who has never medalled in any SEA Games. But it was meant to be. Atilano who was always on the injury list on three consecutive SEA Games (2005, 2007, 2009) struck back and made an emphatic redemption. 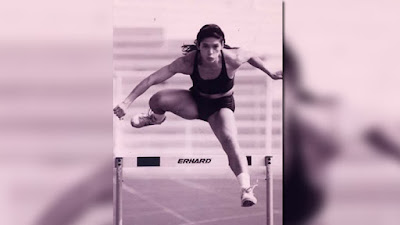 Was it a fluke? No. She stretched her medal-winning streak to three in the same Grand Prix circuit. Her status as one of Asia’s fastest rising stars was thus sealed.

On breaking Posadas’ record, Atilano says: “I just thought that in order for me to break her record, I have to be muscular like she was. When I clocked 13.7 seconds in one of PATAFA (Philippine Amateur Track and Field Association) track meets, I realized that breaking her record was possible.

That motivated her and she went into deep training, going even as far as the U.S. After participating in several competitions abroad, her time drastically improved and she consistently went under 14 seconds.

Like many Filipino athletes with inspiring stories, Atilano’s is worth telling. She was born in La Carlota City, Negros Occidental where she spent her elementary and high school years, graduated in University of St. La Salle Bacolod with a commerce degree and majored in management info system. In between her school days up to finishing her masters at DLSU Manila, Athletics became her religion.

Her parents were both educators. She is the youngest of three children and has a brother who is a professor at UP Los Banos. She got involved in Athletics because her P.E. teachers pushed her to join a running meet thinking she had springs on her feet. 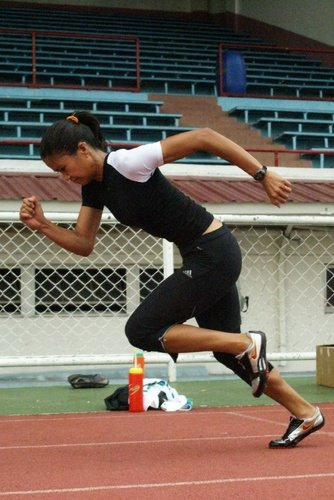 “I was hesitant to be a hurdler. I have always thought that I was a jumper and was never really cut out for it,” Atilano says.

She remembered being very nervous and cried a river the night before because she could not back out of competition. She would eventually vanquish her fears and got used to an event many girls feared.

“When you love what you are doing, nothing is difficult. What is harder is getting on the coaches’ list. You need to constantly let them know that you have what it takes to get much needed support,” Atilano ruefully says.

In the Philippines, sad to say, support is not given to promising athletes. They must crawl their way in and prove something before they are able to get ample help from governing national associations.

Lucky for Atilano, a company came her way and she was given an opportunity to work while training. Two coaches, Jeoffrey Chua and Jerry Cablayan were also always there for her for much needed guidance.

Atilano’s training would begin before daybreak that would last for three hours. She would hie off to work at 10 am and finish at seven in the evening, 6 days a week. She made a lot of sacrifices that her world turned upside down. It came to a point where she would need to choose between working and training. She chose the latter. 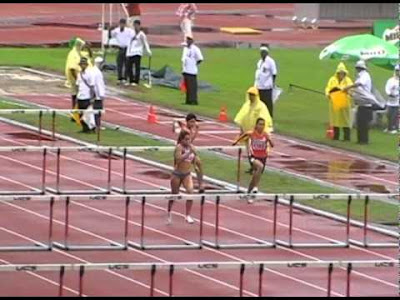 Hurdling accidents and injuries have plagued Atilano’s training days, some of them took months to recover. “The toughest part was not knowing when you’ll be back,” she says. Her woes must have a connection to why you can count by your fingers the number of Filipina hurdlers today and none has broken the 13-seconds barrier up to now.

Training was not totally tough for Atilano though. She considered it as “mahirap na masarap” because of the personal sense of fulfillment it gave her.

Before New York, Atilano participated in Palarong Pambansa where she ruled like no other for four years. Her reign would bring her to the Philippine National Games, UAAP, represent the country in SEA Games (Manila, Vietnam and Indonesia), Asian Athletics Grand Prix in India, Hongkong Germany and to USA Track and Field sanctioned meets in Southern California. 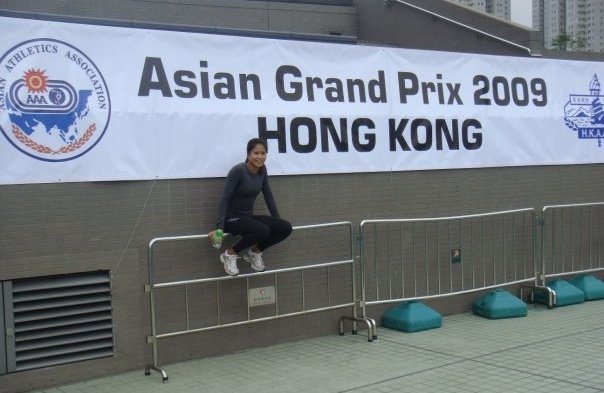 Her training philosophy for all these: “Nothing could replace hard work.”

As an athlete, Atilano was very disciplined, applying it to her diet, sleeping habits and going out with friends. She gave up some of her hobbies and gave her training an unblinking focus. She admits having high tolerance for pain, not missing on her training workouts even when nursing an injury.

She describes herself as an adventurous person. “I have always wanted to experience and learn new things. I hate drama. I could be emotional but I don't want to show that side of me. I always get the first impression of being a "maldita" but that's not true in real life,” she confides.

She notes some great things that are happening in the country’s athletic scene today. Like, more promising athletes are being sent abroad and sponsors are honestly helping. Athletics has always been one of the biggest gold medal contributors to the country’s campaign in SEA Games. “May it continue to produce better athletes and develop the country’s grassroot program even more,” she hopes. 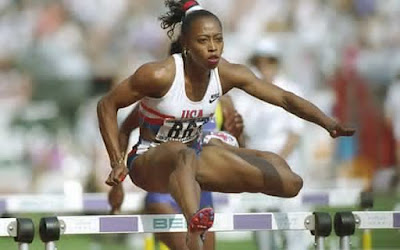 She admires Olympic champion Gail Devers, both 100-meter sprint and 100-meter hurdles gold winner in 1992 and 1996. “I have always thought of hitting two birds in one stone because of her, unfortunately I was not as talented as she was,” she humbly says. Come to think of it, she actually did. She finished her studies and achieved a national record at the same time.

While studying at DLSU, Atilano, had all admiration for most of her teammates. “Some of them came from rich families but their determination was something else. They could afford to pay tuition fees and need not wake up early in the morning but went through it all,” she narrates.

Atilano came to the Big Apple not for the status but for the money and opportunities. “Life is not easy wherever you are. You may be in the best city in the world but you still have to work hard,” she says.

She came upon the invitation of a former national track athlete who was very accommodating and generous to her. After two years, she would decide to stay for good. She is now on her own enjoying her work at a pharmaceutical company. 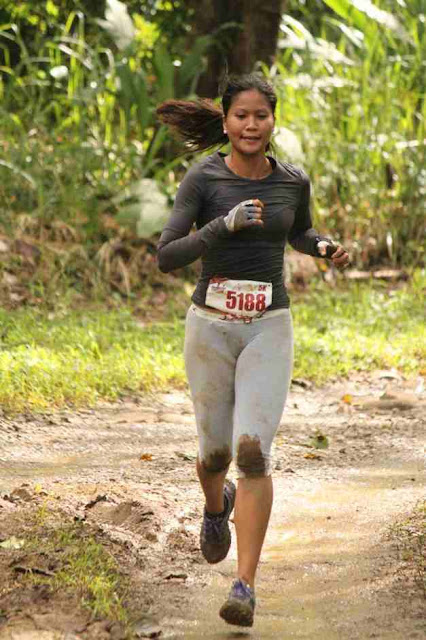 Atilano still follow her training regimen. She misses her athlete life and still wakes up at 5:30am to go to the gym before going to work. Her sexy abs are still visible, a 6-pack body to die for many are envious of. “I am happy and very thankful with my New York life, a world totally new for me,” she says.

What would she advise young Filipino athletes who would want to become Lydia de Vega, Elma Muros or like her? “I would say to them not to hold back if they see any potential in themselves to excel," she says. "Utilize your talent as early as possible. An athletic career is just too short,” she adds.

Atilano says it was too late for her to realize that she could have achieved much more had she started training seriously. Had she did and injuries not stalled her she could have represented the country in tougher, bigger arenas.

One thing she wishes she could have done: “To represent my country in the Olympics and show the Filipino flag to the world.” That could still happen. It could not be in a track oval but in many life’s events she is now fearlessly facing.
Posted by Roger Pe at 8:13 AM