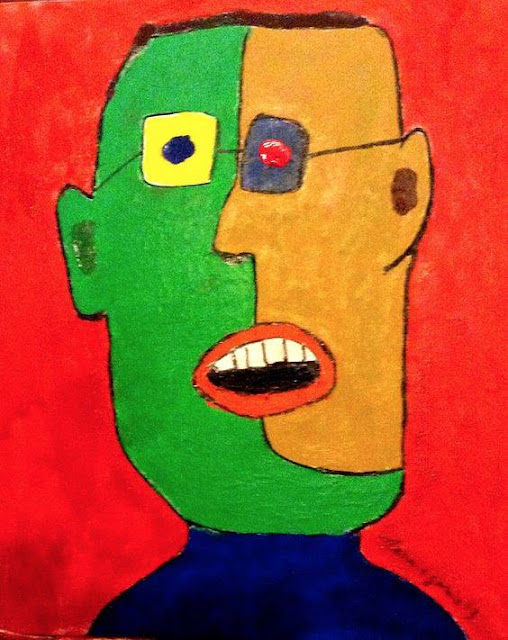 “Blessed are the weird people, the poets and the misfits, the artists and the writers, the music makers, dreamers and outsiders. They force us to see the world differently,” goes an often-quoted line. Steve Jobs used it and so did Dennis Garcia, bassist and writer of many, if not all, iconic “Hotdog” songs.

At age 17, Garcia was already a non-conformist, an outsider of the status quo. He worked as a copywriter for an advertising agency while most of his age group would still be in school trying to finish accountancy, or the usual college course.

Coming from a family of art lovers, he re-engineered musical arrangements of traditional Filipino songs, mixed English with the vernacular and changed some words like a man on the street would pronounce them.

Followers of modern Filipino music, regardless of age, would, of course, remember “Pers Lab”, the pop music that made Manila swoon, and eventually, mass conquered the Philippines. Did it sweep off your parents’ young and nimble feet? For sure, it did, and Garcia’s foray into the music world led original and homegrown Filipino music to become legit. 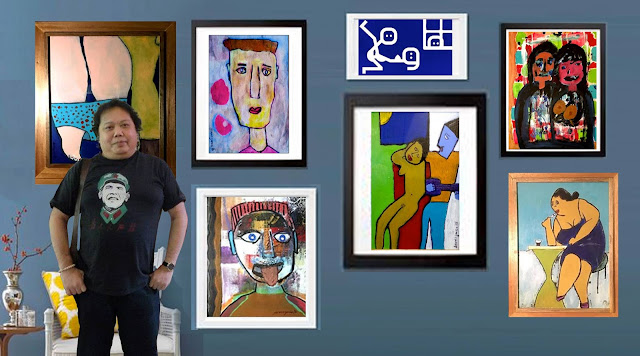 Garcia’s “Manila Sound” was destined to become the Golden Age of Philippine Music. Today, a couple of decades later, a Hotdog reunion concert can still pack a big auditorium, with some of the most scintillating names in the Philippine social strata guaranteed to attend. What does that tell you? Gold is gold. Regardless of what year it happens.

What is Garcia up to these days? He is still writing songs out of his comfort zone but on a different platform. His words and lyrics are now colors and hues. His emotions and lullabyes are now objects and shapes. His vernacular and English verbs are now vibrant crimsons and purples. His thoughts and colorful language are now graphic forms and multiple shades of the rainbow - on the big canvas. 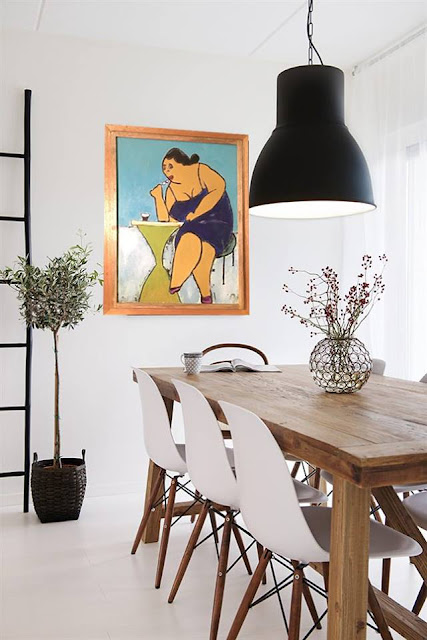 Yes, he paints, and buoyed up by the thought that an untrained artist, Jean-Michel Basquiat’s “Dustheads” sold at an auction for 43.5 million US dollars. “Art can be more rewarding than plunder (and you need not have a diploma from some fancy art school to be rewarded for your work,” he blurts out.

When Garcia mounts his first major one-man show, his acerbic wit, sensual (sometimes sexually explicit) and whole gamut of emotions will be ‘heard’ and seen in glass-encased frames.

He will be exhibiting 25 all-new pieces, all based on songs he has written for Hotdog. The venue will be Ricco Renzo Gallery, second floor of LRI Design Plaza, Reposo in Makati City on June 7, 2017, which will run until June 18.

He will bring back all your favorite OPM songs, but this time, on canvas using acrylic and oil paints. No formal art education, no rules, no formulas, no pretensions, Garcia will take this rare opportunity to introduce you to the phenomenon that the world is now embracing with gusto - Outsider Art (naive, self-taught art from simple inspired people, “aimed at your heart, not your wallet,” he says.

Garcia dabbles in freewheeling painting style, the non-classical way, outside of the avenues art schools in the world would expectedly lead art students. He uses the alphabet of his heart and expresses what his mind tells him on a usual 3 by 3 feet canvas.

His creations pulsate like his songs. Like an artist who does not conform, there lies what’s new in Garcia, the ever revolutionary, and now a compleat artist.

Garcia wants to champion the genre, a Matisse like expressionism movement. “There are no rules here, my art unchains myself. I am not who will be confined in a box. I have also invited fellow outsider artists to motivate them into working on their own exhibit,” he says. 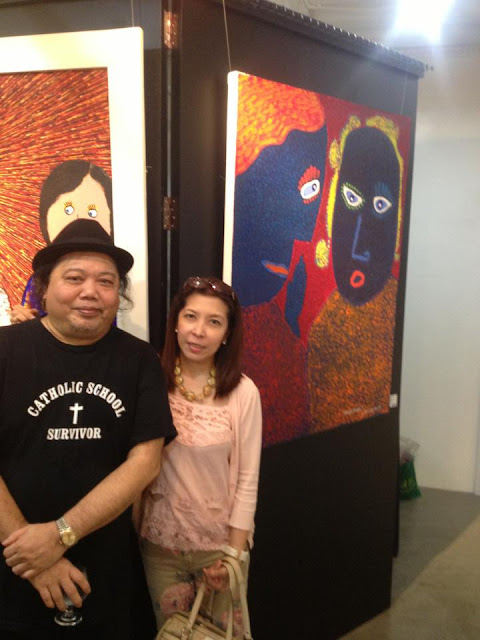 The pieces will all be affordable, according to Garcia. He emphasizes that if art lovers would hold on to what they purchase, “they may be holding to truly appreciating pieces of art, since it is a rare instance when a songwriter translates his work into canvas,” a totally surprising fresh idea that might catch fire.

“I want to propagate a style largely made up by the artist as he goes along, just following his instincts as to what color to use, when and where, and not bound by any school of isms,” he adds.

Garcia makes reference to the style as full of symbolic value, largely determined by the individual artist, and not governed by a rigid set of pre-existing rules.

What is Outsider Art?

The Huffington Post describes Outsider art as “often obsessive, visceral and autonomous — dissociated from the artistic norms and trends that define the zeitgeist for those not impervious to it.”

Outsider Art is the stripping away of cultural conventions and the impending shadow of the artistic establishment. Here, the artists’ deeper inspirations and messages come to the surface.

Words commonly associated with Outsider Art are “naive,” “pure,” “raw,” “visionary” and “fanatic, untouched by the pettiness of everyday life and mainstream culture. It unveils the unadulterated act of creation, outside of trends and the desire for commercial success. It can convey the power of the unbridled imagination to create order and beauty from basically nothing.

It is also associated with the work of the mentally challenged.

A doctor once documented the work of his patient, Adolf Wolfli, a genius who produced countless thousands of works from a small cell in a Swiss asylum.

Dr Hans Prinzhorn collected thousands of creations by psychiatric patients and his book “Bildernerei der Geisteskranken” (Artistry of the Mentally Ill), published in 1922, became an influential work amongst Surrealists and other artists of the time.

One such artist was Jean Dubuffet. Together with others, including Andre Breton, he formed the Compagnie de l’Art Brut in 1948 and strove to seek out and collect works of extreme individuality and inventiveness by creators who were not only untrained artists but often had little concept of an art gallery or even any other forms of art other than their own.

Dubuffet’s concept of Art Brut, or Raw Art, was of the genre that was in their “raw” state, uncooked by cultural and artistic influences. He eventually built up a vast collection of thousands of art pieces, which bore no relation to developments in contemporary art and yet were innovative and powerful expressions of creativity. 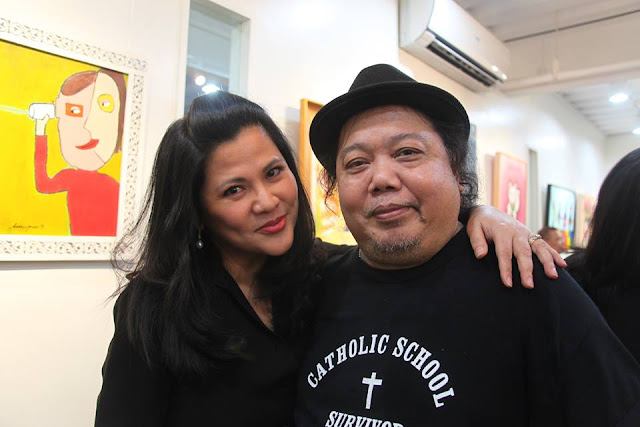 “Art is one of the few things left worth doing,” says Garcia. “I paint my feelings, not decorations,” he says. Among his creations that are already hanging on the walls of notable people’s homes are “Pisbol” (a charming portrayal of a society matron “making tusok-tusok the fishball”; “Manang”, a naïf-like painting of an innocent woman staring at you from a distance; “Careful” a tribute to Inday Badiday’s famous line in an iconic 80s show with the same title.

Also included in the exhibit are must have pieces painted from Garcia’s prolific mind. Among them is a finger-painting of Stevie Wonder done from memory, a refreshing portrait of the wonder musician exploding with colors red and green accents.

Go, pick a Garcia painting and bring it home. When his songs have stopped playing in the windmills of your mind, they will be forever in the privacy of your own castle.
Posted by Roger Pe at 4:00 PM