THE PINOY CAPTAIN WHO HAS CIRCUMNAVIGATED THE WORLD MANY TIMES 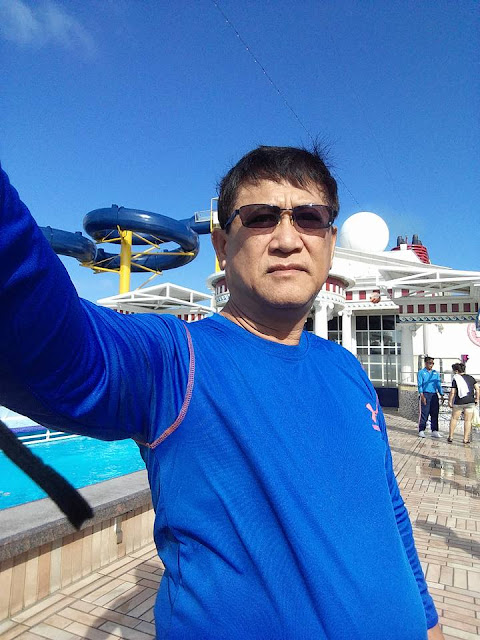 Serendipity, I met Ric Autajay and his wife Ces on a ship, about the same time last year. It was the maiden voyage of Star Virgo, the 19-year old luxury vessel to Manila, a much-publicized event that hugged lifestyle sections of many broadsheets in the metro.

The 13-storey ship with 2,600-passenger capacity and 935 cabins had carried 2,000 Filipino tourists per sailing over a three-month period - to Laoag, Kaoshiung and Hongkong.

It happened on our last night on the ship, where all passengers were requested to attend a black-tie gala dinner. As the ship was heading back to Manila, we agreed to meet in the grand lobby. On that crowded night when the bands were playing loud music and people were pushing elbow-to-elbow to get to the dining hall, I suddenly became sociable (I was chasing deadlines the night before). Alas, that happened only for less than one hour. I had lost them in the stream of people and I thought I would never ever see them again.

Fast forward after 12 months, I would meet them again in San Jose de Buenavista, Antique, on the opening of national SCUAA (State Colleges and Universities Athletic Association) sports meet, part of our DOT media familiarization tour activities that the Western Visayas Tourism council had planned for us.

As he toured me around the town, Ric told me his story. Being a retired captain of large foreign ships, it was time to get to know him better and know how it was to travel around the world, living on a ship most of the year. Now happily building his gasoline station business and tending to his fish farm, I would learn later on that he has also helped a lot of people in Antique pursue a maritime career.

The subject of Filipinos always being away from their homeland always interested me, and the fact that Ric had mentioned that he had circled the world many times excited me more. As I was writing this article, I was wondering how many Filipino seamen are sailing the world seas right now, and why shipping companies prefer to hire them than other sailors from other countries. 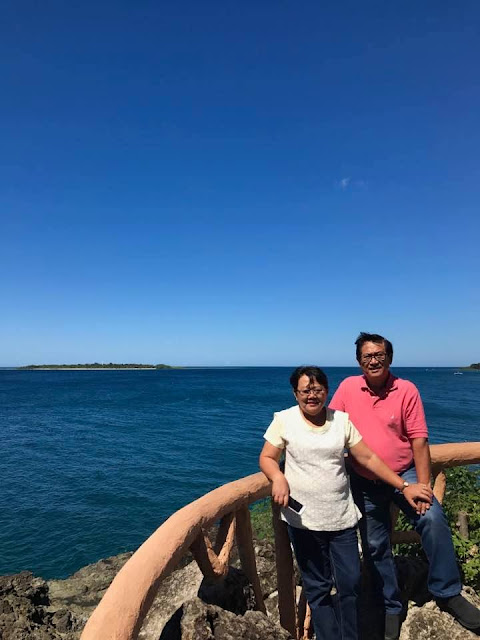 According to DOLE (Department of Labor and Employment), the country remains to be the world’s top source of seafarers, with around 229,000 Filipinos on board merchant shipping vessels around the world at any given time. Filipino seafarers comprise more than 25 percent of the 1.5 million mariners worldwide, making them the “single biggest nationality bloc” in the global shipping industry.

In a study made by the Commission on Filipinos Overseas (CFO), 358,898 Filipino seafarers were deployed last year, infusing about $5.575 billion to the country’s economy through their remittances.

Filipinos are the most preferred seafarers in the world because they are better trained and proficient in English.

Ric emphasized the importance of English communication, especially in life and death situation in the middle of the sea. He related a horror story that caused logistical nightmares to his shipping company when a foreign crew mistook a message and delivered “ice” instead of “rice” to a foreign port during a typhoon.

Being a seaman gave Ric a great satisfaction to provide for his family and some form of financial stability. “The fact that I would like to feel being an adventurer, to see many places in the world and still get paid for doing it excited me no end,” he said. Ric, who was expected to be away from his family for at least ten months every year prepared for the worst. He and his wife and made some adjustments. 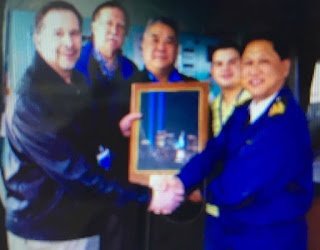 “What’s the difference between manning a vessel and a cruise chip, I asked. “Being a seaman and a captain at the same time, is a big responsibility. You are dealing with millions of dollars of goods to be transported to some specific locations all over the world, and making a safe voyage without any major problems to the vessel, its crew and the company as well,” he emphasized. A cruise ship crew has its own way of dealing with thousands of passengers on board to make them safe and enjoy their trips,” said.

To be successful being a seaman, Ric gave important pointers: “First of all, you need a degree in nautical or maritime science to be eligible for an on-board training experience with subsequent testing process until you get to the highest level of being a captain, which takes about five years to accomplish,” he said. 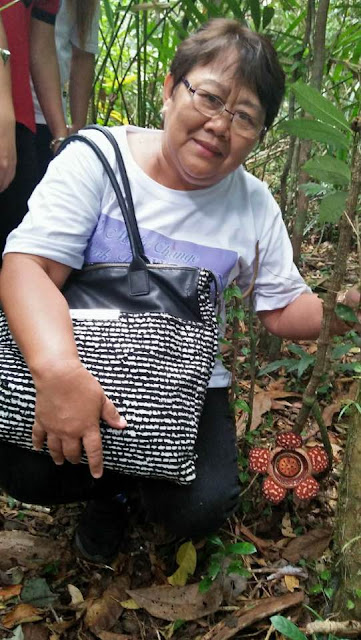 “On top of that, maritime law requires you to have a rigid training onboard ocean navigation with specific scenarios. The traits you need to have: You must be calm, level headed and very knowledgeable on all aspects of seagoing oceanography, that includes safety of life and protection of the environment at sea (to maintain the blue color of our oceans),” he added.

He also stressed that one must be passionate about being a maritime adventurer, you must have the determination, decisiveness and diligence,” he pointed out.

His career as a seaman started on April 1973 until July 2015, a span of 42 years. Among his many memorable trips was being an apprentice onboard a freight vessel from Manila to the vast expanse of the Pacific Ocean, to Hawaii and trans-exiting through the Panama Canal, and then to Philadelphia, USA - a full circle of an exciting but very challenging internship.

He has sailed to Scandinavian seas, Europe, Africa, the Atlantic and Indian Oceans and South American sealanes.

What about his most frightening experience? Ric related that it happened near Alaska when he and his men encountered a bad weather during winter. The temperature was below zero and a hurricane was fast approaching ready to slam their boat with a brute force. It almost rendered him witless but he and his men were able to manage and pull through the storm.

He would also get many awards throughout his career. The highest award he received was from Mitsui OSK Lines (MOL), the Japan presidential award given out during the first Annual General Meeting for safe operation on December 10, 2008, an industry gathering sponsored by Japan’s Safety Operation Headquarters.

He also received a plaque of appreciation from Toyota Automotive Company for safe, efficient operation with zero damage in transporting cargoes. During the time, the biggest issue facing the company was maintaining safety, maintaining zero incidents, and to make the safety of the vessel as well as sefarers the highest priority. The plaque has been onboard the vessel, on display throughout his tenure as captain of the vessel. 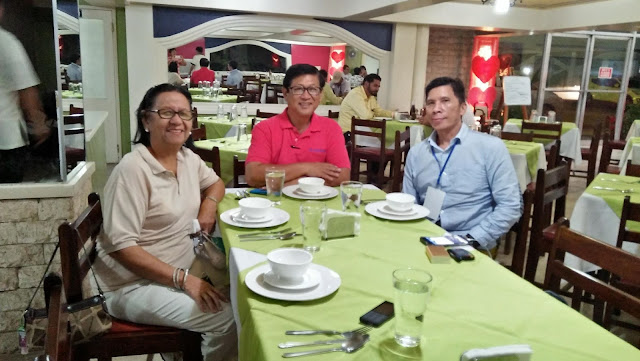 Born in Hamtic, Antique, Ric attended primary schooling in the same town and finished high school in Antique National School (ANS) in San Jose. At Iloilo Maritime Academy, he finished an Associate in Nautical Science college degree. His parents were Mariano Xavier Autajay and Salvation M. Mosquera. He has six brothers and a sister, all of them grew-up in Hamtic and Manila. He and Ces got married in 1982 and had their first child in 1983.

Being a seaman was his choice right after he graduated from high school, mainly for the following reason: To be able to enjoy what the world has to offer. The very first world city he saw was New York City, then on to his most exciting trips as a sailor: Practically every European country, Middle Eastern, Caribbean, South and Central American countries, the West and East Coast of the US, African nations, the Southeast Asia and Australia, including New Zealand. 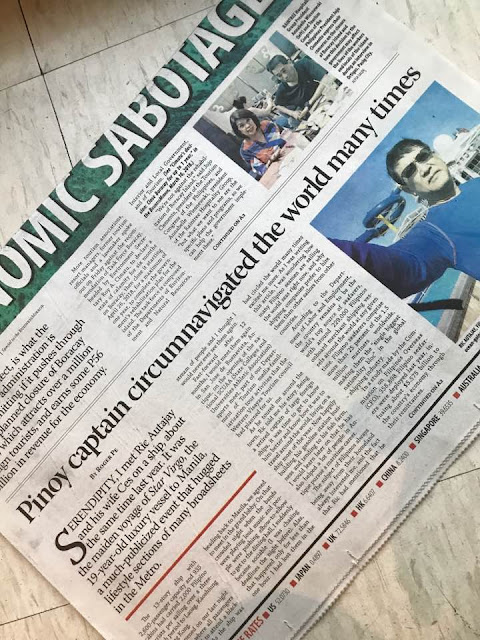 He did not forget to tell me the reason why Filipinos are top priority by maritime companies: “Filipinos are hard working and they have the ability to communicate intelligently. They are full of energy,” he said. Did he ever encounter discriminatory acts?

Ric said, “No, we were given orientations on how to handle derogatory remarks and try to solve them if there were issues.”

“Having a family away from your sight for a length of time makes your heart grow fonder", Ric said. “I was able to separate my job responsibilities and the longing for my family. We have entertainment facilities for our crew. We have movies on weekends and mount crew parties,” he related. 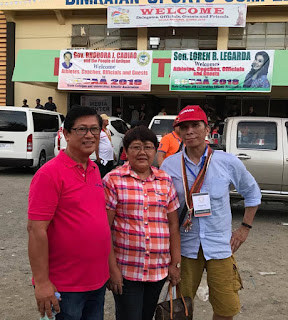 Being a captain of a big shipping company gave Ric financial stability for himself and his family. He had no qualms in saying that if he would go through life again, he would still choose being a seaman and a captain.

“I loved the adventure and challenges I met,” he proudly said. He said that in the next ten years, shipping companies would still prefer Filipino seamen even with the advent of modern equipment, computerized technology and other countries like China, India, Vietnam and Russia are training seamen also. “I think it will be a big boost to the hiring process of the shipping companies,” he said.

After retirement, what keeps him busy? “I deal with the "ins and outs" of owning a business but the best fringe benefits of being retiree is seeing my family everyday (though deep inside, I still crave for life on the sea),” Ric said. I try to maintain a regular routine schedule that benefits my family and our business as well, and tending to my fish farm. I try to be very considerate and understanding with people I work with. Life is really too short to have enemies at our present age,” he said.

Had he not became a ship captain, Ric wanted to be a criminal lawyer. Today, he just wants to share his knowledge and experience to the younger generation of seafarers. “To be able to tell them how challenging but rewarding this profession is and be able to help their potential to succeed and have a meaningful life,” he said,
Posted by Roger Pe at 3:50 PM