A CULTURAL VOYAGE IN THE AGE OF MISSILES 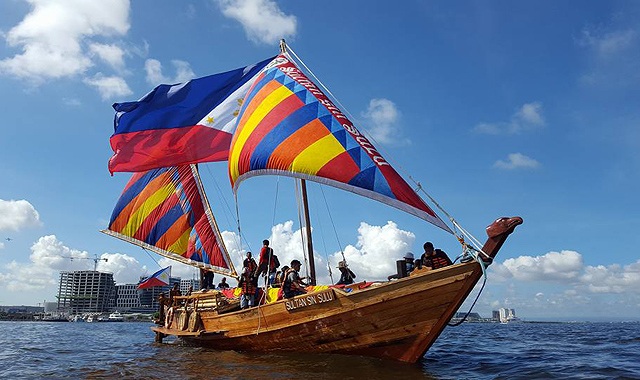 A 20-kilometer sea trip of crazy winds and stormy waves is bad enough. What about a distance 50 times longer, in varying degrees of weather condition, and you are on your own in a wooden boat 50 times smaller than an ocean liner?

This is the story of the Filipino pride, the Balangay.
On May 3, 2018, another milestone in Philippine history was written. Three Philippine Balangay boats successfully reached Xiamen (formerly Amoy) China, retracing the route made by Filipino Sultan Paduka Batara in 1417. 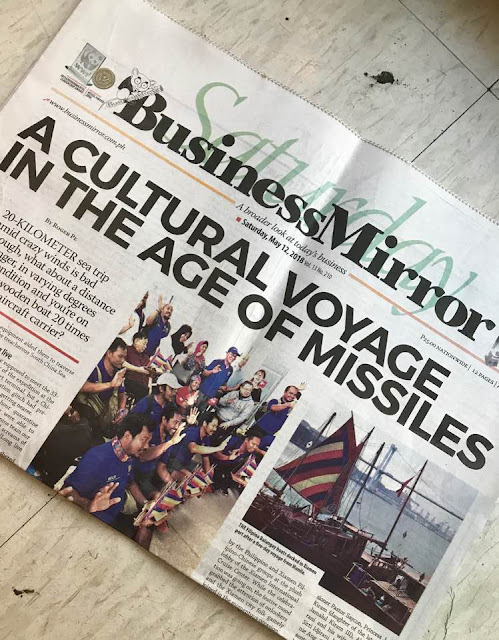 What made it truly historic was that they were exact replicas of the ancient boats used by the Sultan and no sophisticated navigational equipment aided them to traverse the treacherous South China Sea.

We were supposed to meet the 33-man crew of the expedition at the Xiamen port terminal but a Chinese immigration glitch had prevented us from getting closer. But after a 24-hour quarantine policy had elapsed, we were able to give the proud Philippine team our most heartfelt joy and screams, “Mabuhay ang Pilipinas!” 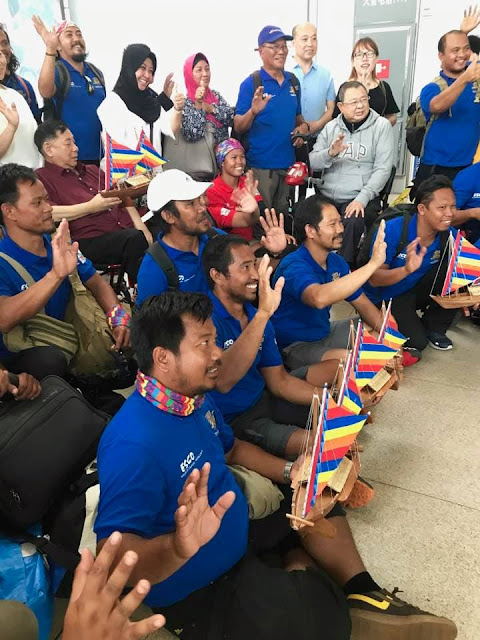 The team was then ushered to a rousing welcome prepared by the Philippine and Xiamen Filipino-Chinese groups at the spanking lobby of Xiamen International Cruise Center. While the celebration was going on, the festive mood grabbed the attention of onlookers and Xiamen city folks gamely joined in the momentous occasion.

The leader of the heroic crew was Arturo Valdez, former Department of Environment and Natural Resources undersecretary. Valdez is a veteran mountaineer, marathoner and former president of Mountaineering Federation of the Philippines. He was also former undersecretary of the Department of Transportation and Communications (DOTC). In 2007, he successfully led a successful Mount Everest climb with two Filipino groups.

"This boat is not an all-weather boat, very vulnerable to weather and stormy sea," he said during a banquet given to him and his men. Though the boats were duplicates of the ones used way back before the Spaniards came, engines were installed on two of them to comply with Chinese maritime regulations (China prohibits wind-powered vessels from docking alone on the port, Valdez said.

“My greatest fear is to sail at night, because you can be run over by big ships,” said Valdez. Without advanced navigation equipment, the only way his team will spot oil tankers is with their eyes. “We cannot even be seen on their radar because we are made of wood.”
In an emotional speech, he said, the voyage demonstrated how the people of Southeast Asia crossed the high seas in the past to maintain contact with its neighboring countries. "These waters never divided us. They unified us," he said. "And this boat, as a replica of an ancient boat, is a symbol of that relationship." 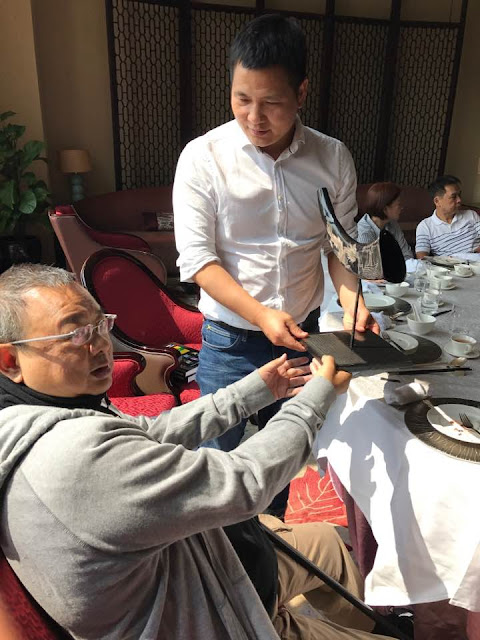 Three traditional Philippine boats known as Balangay sailed from Manila to China last April 28, 2018 and arrived five days later in the port of Xiamen. A gem of a boat similar to those constructed by Filipinos in the olden days, the Balangay had none of the trappings of a modern maritime vessel. No nails. No nuts and bolts. No steel. It was solely made of Filipino ingenuity that braved through foreign waters and reached unprecedented distance, 1,000-kilometers to the eastern city of Xiamen on May 2, 2018.

“If there was no wind we had to paddle our way. There was no communication, we had mobile phones, and we did not stay too far from the coastline,” he said. “We asked fishermen which is the best way to go. It was just to prove that in my DNA I am a seafarer.” The 18-meter boats were replicas of a Balangay, a type of vessel used in the region as far back as 320 AD.

Sultan Paduka Batara sailed to China in 1417 to pay tribute to the Emperor of China and engaged in trade. He fell ill and died while in Shendong province. His two children were left behind in China and eventually inter-married with the locals.

Made from a Philippine hardwood, the planks of the Balangay were fastened together by hardwood pins, measuring some 19 centimeters long and were driven into holes on the edge of each plank. They sew the boat together.

Its hull (about 15 meters long and 4 meters wide) was ordinarily semicircular in cross section and with no marked keel. Provided with huge outriggers, the boat was propelled either by a sail or paddles. 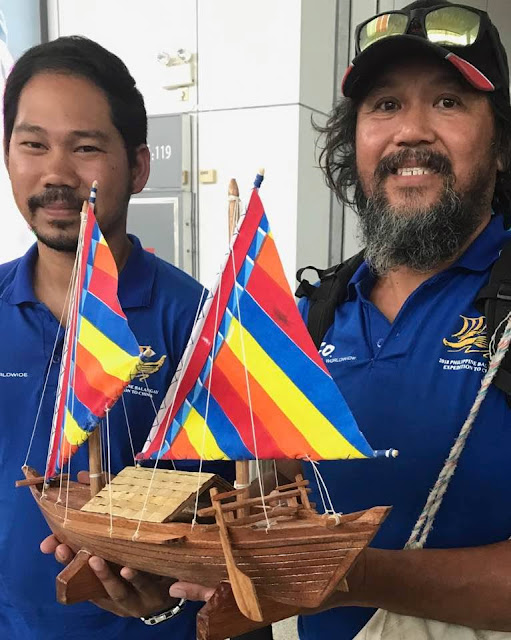 The Balangay was declared the National Boat of the Philippines on November 2015, chosen so that the "future generations of Filipinos will recognize the invaluable contribution of their forefathers in shaping the country’s maritime tradition.

Back in 2009, the “Kaya ng Pinoy” movement that conquered the summit of Mount Everest in 2006 announced plans to re-construct the Balangay boat, with the help of Badjao and other tribal members. Its aim: trace the routes of our Filipino ancestors around Southeast Asia and the Pacific.The team hired Badjao master boat builders, whose predecessors actually built such boats, and used traditional tools during the construction. They were constructed near the Cultural Center of the Philippines complex.

When finished the Balangays, named “Diwata ng Lahi”, “Masawa Hong Butuan”, and “Sama Tawi-Tawi”] navigated to the southern tip of Sulu stopping off at numerous Philippine cities along the way to promote the project.

The journey around the Philippine islands covered a distance of 2,108 nautical miles or 3,908 kilometers.
On its second leg saw the Balangay sailed throughout Southeast Asia in 2010, then Micronesia and Madagascar the following year. It ventured across the Pacific to the Atlantic and all the way around the world, returning to the Philippines in 2012 to 2013. 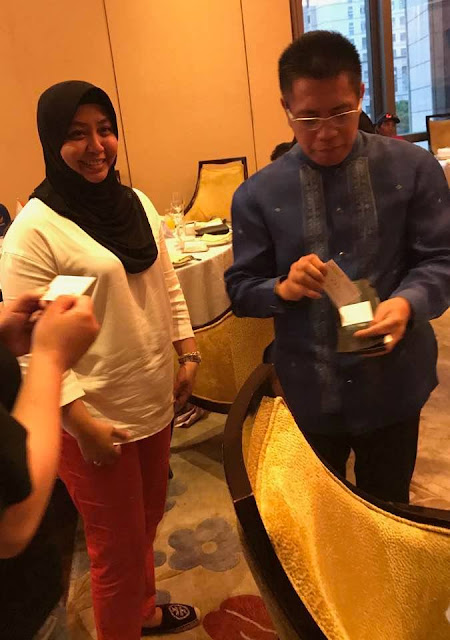 Valdez’ talent as a leader and manager caught the eye of then president Fidel Ramos, who appointed him undersecretary at the Department of Transportation and Communication in 1996. He stayed with the DOTC until 2004. In 2007, he was deployed to the Middle East as a special envoy, staying there for a year.

He is currently still in government as undersecretary for field operations at the Department of Environment and Natural Resources. He is also a director at the Lopez-owned Energy Development Corp., the country’s pioneer in geothermal energy generation.
That wasn’t the end of his engagement with Everest. In 2008, Valdez himself ran the 42-K Everest Marathon, finishing in 10 hours, five minutes and 46 seconds. It was only after the marathon that he began thinking of what he was going to do next.

Valdez and his men were held by naval authorities when they reached Malaysia, Cambodia and Indonesia.

But all these difficulties were made up for by the beauty they encountered on their voyage. Dolphins swam alongside the boats. Spirits were lifted by the welcome they received when they landed. Hunger and fatigue would disappear when they saw the enthusiasm of school children wanting to learn more about the country’s maritime heritage. 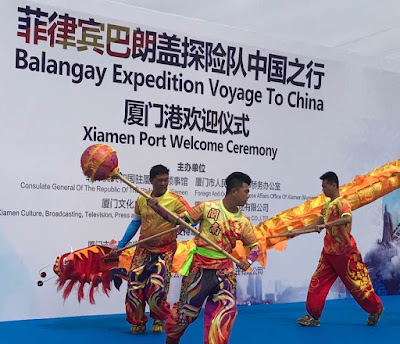 By December 2010, the voyage of the balangay was about to come to an end. Valdez invited all former and current presidents to join them on the final leg of the journey from Cavite to the CCP. The message he wanted to send was that despite our leaders’ differences, they must never at any point endanger the country itself, but rather learn to work together and safely guide the country to the right port at the destination.

Former president Ramos agreed to join the final leg of the journey. Then newly elected President Benigno Aquino III sent executive secretary Paquito Ochoa Jr. as his representative. On Dec. 13, the three vessels sailed into the breakwater behind the Manila Yacht Club and were greeted by a grand homecoming ceremony. The trip was supposed to coincide with President Duterte’s China visit last May.

But because of inclement weather, as well as repair and maintenance issues, the trip has been tentatively postponed to April next year.
Valdez continues to spread his message, a call for national unity and to develop our maritime domain. “This year, 2017, happens to be exactly the 600th anniversary of that voyage, so what better way to commemorate this historic undertaking than to retrace that journey,” Valdez explained.


The crew was fortunate that politics had not got in the way of their plans, he added. “We don’t get involved in politics,” he said. “It is a cultural voyage. These waters in Southeast Asia unified all the peoples. And I think, in a way, that’s the message of this entire voyage.” 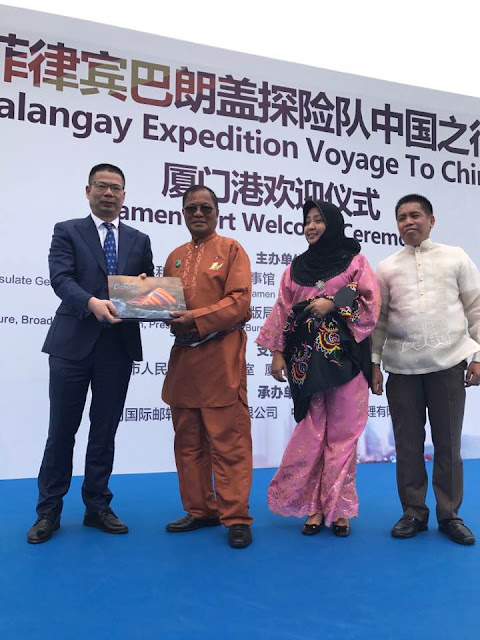