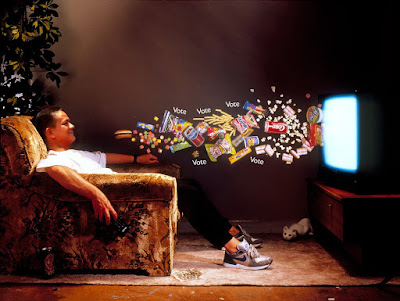 
Perhaps, you remember the cola war, when one brand tried to topple another cola with its “challenge” and “generation” campaigns. Competition was stiff. Ad agency staffers were forbidden even to participate in promotional activities even on a personal basis, of opposing brands outside of agency premises.

Then came the orange drink (“may pulp bits syempre!”, ito ang real orange!”, etc) war and the battle of detergent bars. Powder detergents also joined the fray. Shampoo brands outshouted each other hoarse on broadcast media till you can’t distinguish one from the other.

Fast forward to the new millennium and on to the first decade. Telecom brands poured their large barrels of money to retail their services. Full page, full color centerspread ads and high frequency tv ad bursts are common. They change campaigns as as one changes clothes. Competition was fierce that it was possible to know what competition will be putting up the next day.

Now, there's political advertising.
Those running for various government offices will be fighting against colas, detergents, shampoos and telecom brands for our attention.

Broadcast stations will be once again reap bundles of money. Ever since the lifting of political advertising in the Philippines, a lot of money has been pumped into the country’s coffers. And with an economy that many say is on the big rebound, the May 14 elections in the Philippines may generate millions of dollars for television stations as some 17,000 candidates contest 3,600 political positions across national and local positions.

No doubt there will be increased spending but some say it’s not necessarily a good thing. In the U.S., Tim Kay, director of political strategy at National Cable Communications recently said: “The boost in overall spending will clutter the airways, hampering the ability of candidates to define themselves and their opponents. The decision makes it even more important and targeted with your money – particularly candidates with limited resources.”

Did you buy a shampoo because of its tv advertising? Did your wife scamper to the supermarket because a detergent bar promised her whiter clothes on the boob tube? Did your teen brother switch to another mobile phone service provider because that’s the most frequent brand he sees on tv?

That seems to be the case when it comes to Philippine politics. The more a candidate is seen on media, the higher his ranking on surveys and chances of winning.

They say that when you can penetrate deep into a Philippine household, half the battle is won. If the penetration sticks and stays in your targets’ minds till the day they step into the voting precinct, voila, you have a winner.

Let’s see the facts: A television ad reaches not only a very large but diverse audience - across all-age and socio-economic brackets, rich or poor, bored or desperate housewives or insomniacs after midnight. The list is long and the “glitz” associated with producing a tv spot makes it one of the most appealing marketing tools.

Of the 13.8 million total Philippine households, 9.8 million have tv sets. 3.5 million households are in metro-Manila, Laguna, Rizal, Cavite and Bulacan area, roughly 1/3 of the total tv households in the country.

Metro-Manila alone has 96% tv penetration. Generally, Filipinos watch about 200 minutes of television daily. This high level of viewing is second only to Japanese viewers. Peak viewing times are between noon and 1 p.m. and in the prime time from 7 to 10 pm.

Over the last few years, tv advertising spending in the Philippines amounted to 347 million dollars or almost 20 billion pesos. While tv medium is King it is also the King in expenditures. But that is another story.

When you buy a tv ad airtime, your commercial isn’t only fighting with other brands, it is also competing with the audience’s environment. During broadcast time, target may never see it unless it is impactful enough and brings in the ‘jolt’. A few bucks will give limited exposure from a sea of clutter and unless you purchase additional time, viewers may not see your ad again. You are just wasting money away if you don’t reach your target at least 5-7 times.

Without the lines “For President” “For Vice President” or “For Senator” somewhere in their television ‘advocacies’, it is easy to spot who is gunning for a national seat. The most visible of course are the top three in surveys.

Behind by a big chunk, a presidentiable is closing in on consistent survey leader. With more tv spot buys, can he overtake the frontrunner? The answer goes back to our earlier line: it should penetrate and stick to viewers’ minds till election time for a good conversion.

Who are mouthing generic promises? Who are delivering facts and results? Who among them have good track records, can do legislation, represent us well and most importantly - walk the talk? Can television advertising show us the answer? Yes, if persuasive advertising is selling a damn good product.

Scene and Noted: The recession must hit these agencies real hard. For all they said that they are apolitical, they are actually doing political advertising for some candidates and are vocal about it.
Posted by Roger Pe at 9:10 PM