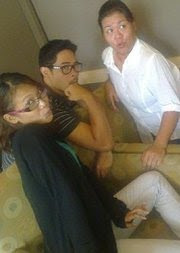 
There are now more than 500 million active users on Facebook worldwide, 50% of which log in at any given day. An average user has 130 friends and spends over 700 billion awesome minutes per month surfing.

Wait there is also a “like” button that you can click underneath every single post to signify that you are pleased with what you see. You can make a comment or totally ignore it.

With this brand, or more specifically, ad series, however, the “like” button has reached feverish high, and has even grown to a Fan Page.

As in other fan pages that drum beaters of celebrities purposely put up to jack up membership, Cornetto handlers did it without even lifting a finger. The fans, mostly teens, did it.

Awareness, copy lines verbatim recall, comprehension, humor, overall likability – this campaign by Lowe and Partners, created for Cornetto Unilever, is most likely your favorite, too.

And why not? The campaign is a product of the heart like its logo. You can see love sprinkled all over it by a team whose passion is as intense as that of people where the ice cream originated, Naples.

And the good news is, it is not borrowed from an international campaign.

In an advertising landscape that keeps on changing and local ad agencies are marginalized because of budget shifts to mother networks and aligned agencies, Lowe and Partners’ “Sarap Ng 20 Pesos” tv ad series – “Horror” “Barber”, “Bouncer”, “Sweater”, is a breath of fresh air.

It’s homegrown, borne out of pinoy creativity and based on local insights that the teen market can really relate.

“We’re proud of our work for Cornetto and even more so that some of our agency’s work has gone regional,” says Creative Director Abi Aquino whose team has focused on the brand for a couple of years now.

Aquino, whose creative managerial style includes allowing her underlings to fly, believes in collaborative effort. “I believe every one has an idea worth looking into,” she says with a firm tone.

Aquino and her team squeeze their creative minds to the last drop, regularly churning out a rich number of ideas, and not settling for less. “We make sure that we are ready and have a bounty of options for clients to select from, whether for traditional, new and social media,” she says.

Her equally energetic Art Director John Pabalan, young and most likely a creative director-material, couldn’t agree more. “The group welcomes ideas from whoever, the more the merrier, anybody who can help make the idea in better shape, he or she is definitely in,” Pabalan says.

“Cornetto first used the slogans "Mag-Cornetto ka na lang" ("Just have a Cornetto instead") and "Hanggang Saan Aabot Ang 20 Pesos Mo?" ("How far will your 20 Pesos take you?"). Until today, the latter proves just as strong as when we first launched it,” Account Manager Mel Tomas says.

Before it was marketed in the country, Cornetto enjoyed a successful advertising campaign in Italy using a famous operatic gondolier to sing “O Sole Mio” in many situations and locales throughout Europe.

The campaign ran for ten years (1980 -1990), with its theme recycled back in 2006 and pedestrians, drivers, office workers, even marathon runners in London singing the song. Since then, the ice cream has become one of the most popular ice cream brands in the UK & Ireland.

A cone full of delights, an ice cream that gave birth to a series of highly recalled tv commercials. Most likely, you’ll give it a lot of check marks. Shall we check the “like” button, now?.
Posted by Roger Pe at 8:27 PM