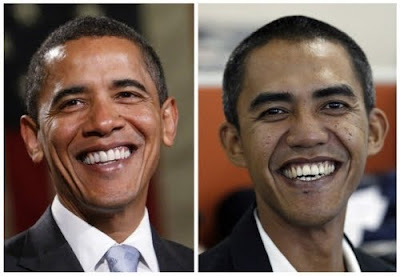 The commercial opens with a Malacanang state dinner for US President Barack Obama.

“Thank you, that was a lovely dinner,” ‘Obama’ says in his opening line.

And for dessert, “Ginataang mais … it’s corn, but we use our coconut,” she says, pointing to her head.

She rushes towards Barack in a way that makes the scene even funnier: like she has trolleys under her feet.

“Ang Motilium! Dyspepsia will disappear in 30 minutes, noh!,” she yells.

Cut to happy ending. With a glowing smile, Ate Glow offers Obama a cup of Batangas coffee and delivers the punchline: “Kape, Barak?”

Great copy, irreverent and funny, this is perhaps the funniest Filipino tv commercial done over the last three years.

The team of TBWA Santiago, Mangada and Puno went as far as overseas to find the perfect guy to play the role of the American president.

34-year-old Indonesian photographer Ilham Anas, a dead ringer for Obama, was discovered by the ad agency for the role directed by filmmaker Eric Matti.

It is not easy to become talk-of-the-town but the tv spot became a massive hit after a few weeks of airing.

Who has ever heard of Motilium before? Word-of-mouth fanned the buzz the commercial generated, brand awareness increased. The spot went viral and won major ad industry awards.

In 2009 Araw Awards, the agency created the Philippines’ most awarded radio ads.
All of them used humor.

Back in 2005 Ad Congress, Campaign’s humorous radio commercials: "Chugs", "Haller", "Tagalog" and "Manash" each won a gold for Ligo and helped the brand win the “Advertiser of the Year” award.

Humor has been Campaign’s creative bailiwick and since then, the agency’s unstoppable.

In her supposed-to-be debut, Lola Techie gives party gatecrasher Gil a scathing tongue whacking after the latter accuses her as lover-snatcher.

She fires back: “How dare you, din po!” then unleashes Gil’s famous venom: “You-are-nothing-but-a-second-rate, trying-hard-copycat!”

Seething with anger, Gil throws in the magic word: “Copycat!”

In the US, who could ever forget the long-running “Real Men of Genius” radio campaign made by DDB Chicago for Bud Light?

Client Anheuser-Busch previously had second thoughts about the ads irreverent style but subsequent consumer testings proved it wrong. The rest is history.

The Bud Light series, conceived by copywriter Bob Winter in 1998, now counts to almost 200, a prolific harvest that also included an incredible number of Gold Lions, including the Grand Prix for Radio in Cannes and Clio.

As of late 2010, American Comedy Network was producing parodies of the ads originally conceptualized as a “tribute to men in overlooked professions with humorous or eccentric habits.”

Is humor good or bad for a brand? Let’s hear what people say:

“Humor in advertising is actually tough. It may be funny to some but corny, even slapstick to others,” says a communication arts professor.

“Humor is like charm in people. We are drawn to people who make us laugh. We are charmed by those who have sense of humor,” says copywriter Raymund Sison of BBDO-Guerrero.

Sison, who wrote award-winning Joy radio ads for Campaigns, says: “You need to make people laugh if you want their eyes and ears, including their hearts.”

For some clients, humor can create immediate recall but not exactly purchases.

“It can make you laugh all the way to the awards show but not necessarily to the bank,” says a marketing director.

“Variety is key to a successful humorous campaign,” says Marl Levitt in his funny, wacky “Comedy Writer For Hire” website.

“Once an ad wears out there's no saving it. Humorous campaigns are often expensive because they have to be constantly changed,” he says.

Levitt stresses a good point in saying - a commercial may leave one person rolling on the floor with laughter but it may also leave a “bad taste” in another’s mouth.

Some Pinoy ads love to poke fun at people with self-deprecating humor. Done in good taste, they can be funny and entertaining.

Want to try humor? Here are a few tips from Levitt:

Seriously think if it’s appropriate to both product and people you are targeting. Remember that the balance between funny and annoying can be delicate. Ask if it’s going to be relevant to the product.

So does humor sell? Of course, yes.
Yes, when it attracts, not distracts.

While purist marketers say our business is to sell and not patronize ‘clowns’, people don't buy ‘sour’, unsmiling and grouchy’ brands either.

Wouldn't we rather buy a brand that is charming, forever smiling – and one that makes us laugh?
Posted by Roger Pe at 4:38 PM