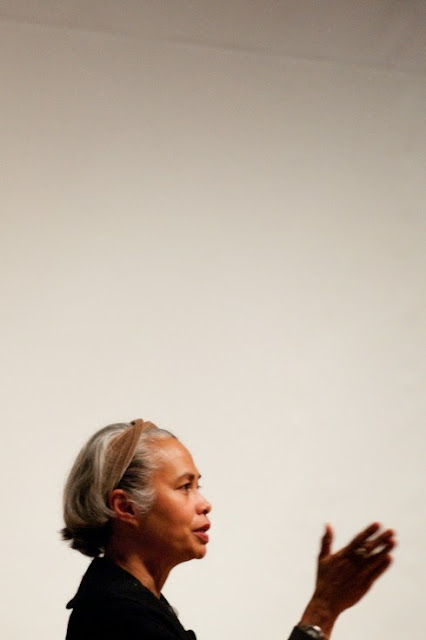 If you know Stefan Sagmeister, you will know Lucille Tenazas.

Tenazas’ portfolio reverberates with stylish spontaneity, cutting across design boundaries, flowing into your consciousness flawlessly. She has class. In her design world, there is no such thing as Brazilian, Japanese or European. More so, Tenazas is young, all-tattooed, hip, with a headphone forever strapped on her head.

When you wander through her work and meet her personally, there will be some pleasant surprises. She is maybe way past her prime by Philippine standards but who cares?

Tenazas is a lady who has conquered America, respected in Europe and still conquering the world. That’s all there is to it and that's what matters. But first, Lucille Tenazas who?

Award-winning creative director without the fancy adjective attached to it, designer par excellence, educator, graduate of one of America’s best art schools, New York professor and associate dean, owner of a hothouse for impeccable design. And that is just the tip of the iceberg.

In 2013, along with seven other notable American graphic designers (John Bielenberg, William Drenttel, Jessica Helfand, Jonathan Hoefler, Tobias Frere-Jones, Stefan Sagmeister and Wolfgang Weingart), Tenazas was given a lifetime achievement award by AIGA (American Institute of Graphic Arts). AIGA is the American professional association for design, a nonprofit organization dedicated to advancing design as a professional craft, strategic tool and vital cultural force. Founded in 1914, AIGA today serves more than 22,000 members through 67 chapters and 200 student groups throughout the United States. It stimulates thinking about design, demonstrates its value and empowers the success of designers at each stage of their careers.

The AIGA Medal is awarded to individuals in recognition of their exceptional achievements, services or other contributions to the field of design and visual communication. Medals have been awarded since 1920 for contributions to design practice, teaching, writing or leadership of the profession in the United States. 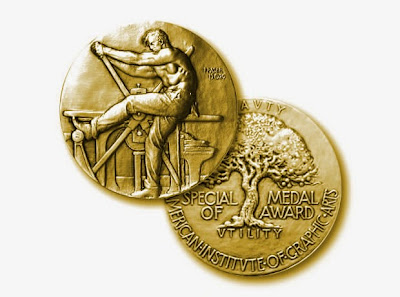 In town recently to bestow the Tenazas Excellence Award in a design competition as well as conduct a master class for Philippine graphic designers (sponsored by Adobo Magazine), Lucille Tenazas is a future National Artist by sheer credentials. The breadth of her design, unbelievably modern despite her age, is an art director’s dream.

She exemplifies talent has no age barrier. The older she gets, the better she gets, and like champagne, vintage cool and sparklingly special. The moment you see Tenazas, you would conclude that she is just eighteen, bubbly, energetic and raring to take design to a new dimension.

On “Be interested in others” blog by Christopher Palacios, her former student, the author mentions: “She’s been designing for over 30 years but she’s still really hip.” Another (OnePaisley), quotes her favorite line she made to her underlings: “Will your work excite you just the same in 50 years?”

Who would have thought that a Pinay would be chosen as one of America’s best 40 design innovators and that San Francisco Museum of Modern Art and Ayala Museum in Manila would exhibit retrospectives of her work? Fate.

In an exclusive interview for the Inquirer’s “Global Pinoy”, Tenazas says: “A profession chooses you, you don’t choose it.”

Tenazas did not become a highly respected designer by accident. She has an in-born talent and worked hard on her craft when sophisticated computers, a convenient artwork-rendering machine of today’s designers, still did not exist.
At an early age, she already showed signs of giftedness. 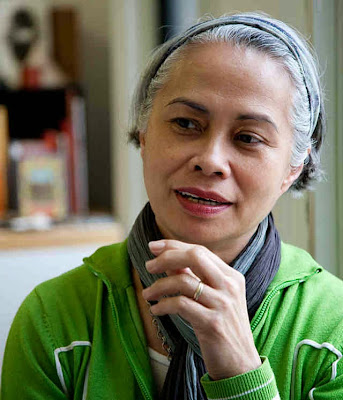 When she was ten-years old, she would gladly volunteer to do school assignments for her siblings. At their family dining table, she would hurriedly clean it dry to make it her instant working area – sketching objects, palm trees and faces down to their littlest detail.

Tenazas belonged to a relatively large family. Her civil engineer father sent all her brothers and sisters, including an aunt, to college. At the College of Holy Spirit Manila Fine Arts in Mendiola, she enrolled under talented instructors to further hone her innate talent. Then she kept winning collegiate art contests and even placed on top of national on-the spot-painting competitions participated by students from all over the Philippines.

Right after college, she was immediately hired by two multinational pharmaceutical companies as a graphic designer. By that time, too, her aunt had made good as a doctor and settled in Michigan.

“When my father died, my aunt whom my father also sent to college, wanted to return the favor. She invited me to come over and explore possibilities of taking postgraduate work in the US.”

When she landed in Michigan, Tenazas knocked on the door of a school right in the neighborhood of her aunt’s house. Unbeknownst to her, it was the Cranbrook Academy of Arts, the same prestigious school two Philippine National Artists (the late Jose Joya and Napoleon Abueva) attended many years back.

Not an easy life

Tenazas attempted to enroll but much to her disdain, was rejected time and again. “They probably thought my work wasn’t too western and not sophisticated enough,” she recalls. She didn’t give up and instead, headed westward and eventually took courses at California College of Arts and Crafts in San Francisco.

Here, Tenazas would absorb many design genres under the famous Michael Vanderbyl and other California design educators whose approach bordered on the new wave and colorful experimentations. 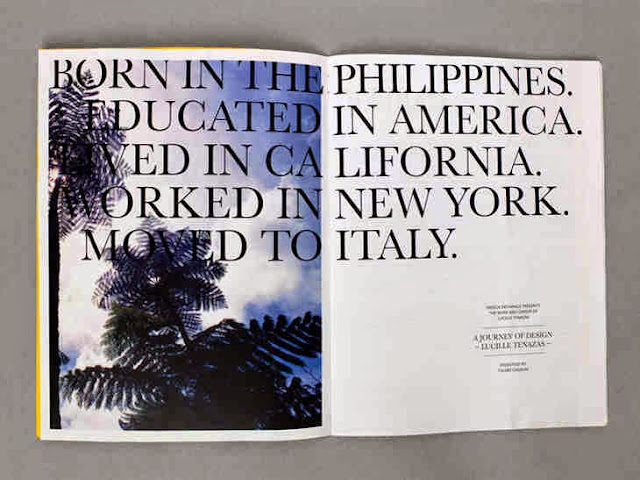 (This magazine spread was a project by Thary Chhom, a designer in Toronto as homage to Lucille Tenazas' work.)

While visiting her aunt in Michigan on a Christmas break, Tenazas again relished the thought of making it to Cranbrook. The fire in her belly never dissipated. Undaunted, she dropped by and showed her new, much improved portfolio. It was jubilation, not rejection this time, she was accepted on the spot.

Enriched by her California experience, which gave her much confidence, she began to slowly adapt to Cranbrook’s rather sedate style compared to California’s freewheeling, exuberant environment. After getting her Cranbrook degree, Tenazas set her eyes on New York where she thought she'd find a job easily.

She was wrong. A woman, an Asian, bereft of any experience, she would receive another round of rejection and spend months pounding the pavement.

Then the rainbow showed up. Harmon Kemp, a small, hardly surviving design company hired her and gave her the springboard for her creative jump. She would begin carving a name for herself, starting with projects from paper companies.

Her journey would bear fruit and after a few years, she would return again to California. Vanderbyl, her former mentor had asked her to join the faculty, a teaching job she held for 15 years. At the school, Tenazas developed a graduate program and became its founding chair responsible for shaping its curriculum in the areas of form, teaching and leadership. 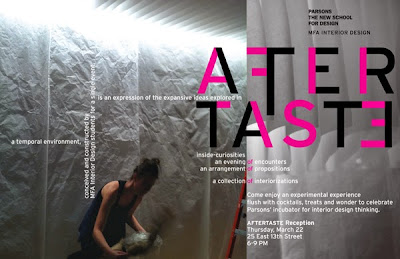 Today, people who know design cannot talk about it without talking about Tenazas. The itinerant girl has become a breed apart, a by-word name in design America. Highly published and authority in her field, she not only became president of the highest governing body of design in the US (the American Institute of Graphic Arts) but is also a professor and associate dean of a prestigious design school in New York.

As associate dean and Henry Wolf professor in the school of art, media and technology at Parsons, New York, Tenazas developed a graduate-level, multi-disciplinary track within the existing MFA Design and Technology program.
In 1995, Tenazas was honored as one of America’s 40 leading design innovators, thus becoming a member of Alliance Graphique Internationale (AGI), joining a select few designers invited to represent the United States in international design competitions.

A lot of graphic design periodicals have been written about Tenazas. Among them as juries and panels of design awards shows, the National Endowment for the Arts, Daimler-Chrysler Award for design Innovation and the Cooper-Hewitt National Museum Design Awards among them.

She is active in the American Institute of Graphic Arts (AIGA), the national organization of graphic designers in the US where she served on the board of San Francisco chapter for seven years. From 1996-1998, Tenazas was the national president of AIGA, the first president appointed made outside of New York in the organization’s 80-year history. In 2013, she became the recipient of AIGA medal for her lifetime achievement in design.

What make her work so youthful looking? Tenazas gives a philosophical answer. “We get older every year. There will always be 20-year old people. So I share meaningful things, like music, jazz for example, to my 18-year old son, which he enjoys. In turn, he shares me his music. I become perpetually young.”

She has been described as a “cultural nomad” in many interviews to which she elaborates: “You don’t stay in one place, you should be a tourist and nomad by varying degrees. In design sense, are you a tourist or a nomad?” 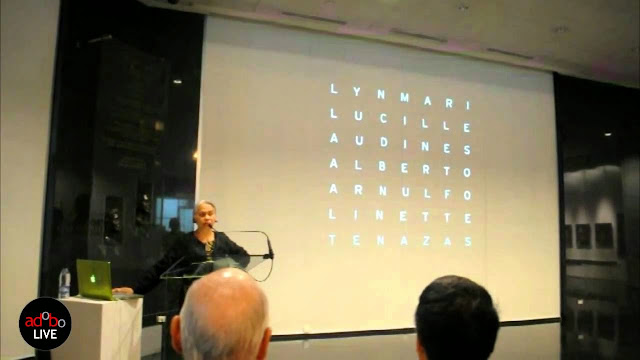 Tenazas doesn’t look at the web unlike many of today’s designers who take inspiration from the work of other artists. She tells her students, “Reboot your brain.”

She also emphasizes that design is for humanity. “Designing is not only for aesthetics but must be created in a humane way with a lot of poetry,” she adds.

She recalls the harsh words she unleashed 13 years ago to one of her students: “Let loose, you are not ready.” In “Blog About Lucille”, the line had an untold impact on the person in a positive way that she would receive 3 heartwarming postcards of gratitude and tribute to her tenacity, from the same student who has become successful.

Tenazas is married to National Geographic photographer Richard Barnes. They lived in Italy with her two young sons when the latter won a fellowship at the American Academy in Rome.

Thanks for Adobo for the last photo used here.
Posted by Roger Pe at 1:57 AM